How can sports inspire a global movement to tackle climate change? That was the focus of Monday’s Sustainable Innovation in Sports symposium in Paris, a half-day event that was part of COP21.

Hopes are high for a deal that would reduce emissions in line with a global level of 2-degree Celsius, but nothing is certain as the clock ticks towards COP21's Friday finish. One thing the event demonstrated for certain: If a deal is made, the capability of sports to bring people together will play a key role in rallying public support.

I was fortunate to experience the inspirational power of sports twice in the past 48 hours, in two different ways.

Sunday saw the type of inspiration that sports fans are used to — meaning that my team, the New York Jets, won a dramatic heart-thumping, come-from-behind victory. OK, this was anything but typical: It was over the rival New York Giants (the Jets hadn’t beaten them since 1993). In overtime. In an important game for both. And I was there, in the second row.

Fast forward to 8 a.m. Monday morning New York time and 2 p.m. Paris time. Through streaming video I watched the sports symposium at the Stade de France in Paris. While the Jets win was inspiring in traditional sports-fan terms, the first event at France’s national stadium since the Paris bombings three weeks ago delivered, with a mix of poetry and policy prescriptions, the inspirational power of sports in a global, save-humanity scale.

The gist from moderators, panelists and speakers alike was:

In a discussion about the "crucial role of sporting events to combat climate change," the panel moderator underscored the uniting force of sports. "Politics and religion tend to be divisive; sports harmonizes communities like nothing else," said Allen Hershkowitz, president of the Green Sports Alliance.

"Dow, the International Olympic Committee Official Carbon Partner, has many projects ongoing for carbon reductions for Rio 2016,” said Nicoletta Piccolrovazzi, global technology & sustainability director, Dow Olympic & Sports Solutions. "As important as the programs themselves are, our plans to engage at least 500,000 people in Rio and around Brazil to make smarter environmental choices are just as crucial. We started early with this messaging which allows us to turn a complex topic into something digestible."

Thierry Braillard, the French minister of sport, is impatient when it comes to sports and climate change. "Sport must be more innovative than it has been to this point," he said. "It can’t wait for government, whether the issue is clean energy at stadiums, recycling or less waste. This is acutely important for Paris as we are bidding to host the 2024 Summer Olympics. Our plan is bold and simple: To make all of the Olympic events 100-percent sustainable.”

Speaking about how tournaments, leagues and associations can "be the change," Rio 2016’s sustainability, diversity and legacy head Tania Braga focused on measuring behavior change.

"We take carbon emissions very seriously," she said. "First we calculated what emissions would look like under a 'Business as Usual' scenario, and then have challenged all areas of Rio 2016 operations to realize 18-percent reductions vs. [business as usual]. Careful planning, the use of low-carbon materials and fuels with lower emissions are helping to get us there. Keeping the change running after the games are over is crucial, so we’ve seeded a program in Rio schools to use Olympic themes to teach climate science. Teachers in every school in Rio will have access to this." 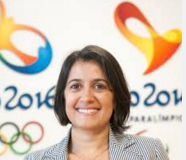 Involving high-profile players in the climate change fight is essential, according to French Basketball Federation President Jean Pierre Siutat. "To change fan behavior, we need ambassadors — in our case players like Tony Parker (San Antonio Spurs) and the French national team — to talk about climate change," he said.

Another discussion centered around engaging fans and creating a sustainability movement.

BT Chief Sustainability Officer Niall Dunne reflected on the moment he and his team realized the inspirational power of sports could affect the climate change fight — and that BT Sport, its sports TV network in the United Kingdom, should play a role.

"We had (Tottenham) Spurs-Chelsea (English Premier League Soccer) on our air last Christmas, drawing 1.7 million viewers," he said. "We said, what if just 10 percent of those fans actually switched to clean energy? It would be the equivalent to taking 50,000 cars off the road." BT Sport decided to go for much more than 10 percent; it's after 100 percent, through 100% Sport (#Go100Percent on Twitter).

That's the global movement the company launched in partnership with America’s Cup winning sailor Sir Ben Ainslie. It encourages sports teams, athletes and most important, fans, to switch to electricity generated from 100 percent non-polluting sources. "Sport is about giving 100-percent commitment to your teammates, to fans and to the community," Dunne said. "100% Sport adds a 100 percent commitment to the planet. BT’s goal for itself is to ‘walk the walk’ by buying 100 percent of its electricity from clean sources by 2020."

The world’s third-largest sports event will take place in France next year, and sustainability is central to its DNA. Euro 2016 is the European version of the World Cup. Nell Beecroft, sustainability manager of the Union of European Football Associations (UEFA), the governing body of soccer on the continent, said, "There will be no private parking spaces at any of the stadia. Our new mobility app will be an Uber-like system for ride sharing, mass transit connections and even bike travel."

Gretchen Bleiler, American Olympic medal-winning snowboarder, said she has "seen climate change and its effects up close — it's affecting all winter sports."

She decided to take action, joining forces with Protect Our Winters , which she said "believes a social movement is missing from the climate change fight." Bleiler pointed to POW’s Riders Alliance, "a community of the most accomplished professional snow sports athletes in the world, all committed to environmental leadership," as a powerful force to catalyze that movement among the 23 million Americans snow sports participants.

Bleiler said she and her POW/Riders Alliance colleagues educate through Hot Planet/Cool Athlete presentations at schools, advocate by lobbying members of Congress annually on climate issues and take action by working with the White House to promote its Clean Power Plan.

I also urge that the NBA work to arrange a LeBron James-Steph Curry climate-change talk.

However, a plaintive question from an audience member demonstrated that the climate change fight is huge, global, multi-generational and just beginning: "How will the world, with 2 billion to 3 billion new people expected by 2050 — most wanting to consume like Americans and the west — be able to fight climate change?"

Lewis Pugh, the incredible marathon swimmer profiled recently in GreenSportsBlog, took on this essential question. "In 2005, I did a swim in the Arctic Ocean," he said. "The water temperature was 3 degrees Celsius. I went back and did the swim this year and it was 7.8 degrees Celsius. So I’ve seen and felt the effects of climate change. Despite this, we cannot afford defeatist thinking. We need to stand up like [Nelson] Mandela, like Pope Francis, and take this on positively, resolutely and with vision."

UEFA's Beecroft shared his own powerful vision on how soccer can take this on: "Getting Lionel Messi and Cristiano Ronaldo to sit down together to talk about teaming up on the climate-change fight."

I would not only like to see the Messi-Ronaldo confab,  but I also urge that the NBA work to arrange a LeBron James-Steph Curry climate-change talk and the ATP/WTA to schedule a Roger Federer-Serena Williams climate-change chat. Talk about the inspirational power of sports.