The following article is an excerpt from our State of Green Business (SOGB) 2017 report. Published by GreenBiz in partnership with Trucost, it provides a global view of the year's trends in sustainable business. The report is free to download here.

Visionary solutions to climate change are unlikely to come primarily from top-down central government mandates, at least in the United States. Rather, they will come from voluntary decisions by customers, communities, corporations and others to choose clean and affordable energy options. And when more than 80 of the world’s largest corporations — including Walmart, Microsoft and Google — commit to 100 percent renewable energy, the market responds.

Less than a decade after companies first started to sign large-scale, long-term power purchase agreements (PPAs) for renewable energy, corporate wind contracts outstripped utility demand. These purchases were dominated by a small number of large corporations, but as costs of renewables have become equal to — or often cheaper than — fossil-based sources, businesses large and small are increasingly seeking ways to invest in wind, solar, energy storage, fuel cells and other more sustainable energy technologies.

As the list of completed projects grows, the trend initiated by leadership companies is moving beyond the early adopters to the mainstream. In fact, 71 of the Fortune 100 and 215 of the Fortune 500 have a sustainability or renewable energy target, or both. The targets reach across industries — with hospitality, chemical and apparel in the lead.

These corporate renewable energy targets are also good news for states and provinces: The AEE report indicates that "companies are deploying their private capital to finance projects that will bring in new jobs and tax revenue while improving the resource diversity of the grid and, in some cases, decreasing reliance on imported electricity."

But it’s not uniform: In many jurisdictions, there are no clear mechanisms for companies to fulfill their commitment to procure renewable energy.

According to a recent Corporate Renewable Energy Buyers’ Principles report, California, North Carolina, New Jersey, Texas and Virginia are the highest-priority U.S. states for renewable energy policy activities. Expect more action in politically “red” states that have much to benefit in the near future. Take Wyoming: Microsoft collaborated with local utility provider Black Hills Energy to design an innovative wind energy deal to deliver reliability without additional costs for ratepayers. It’s a model that could be replicated elsewhere.

Green tariffs are an easy way for customers to opt-into their utility’s renewable energy portfolio.

Companies such as Amazon, Ford, Walmart and General Motors often want to site projects close to their operations, which may be dispersed across many regions and nations. To address policy and regulatory challenges across jurisdictions, there are several proven strategies and trends for corporate renewables procurement.

One major trend: Companies are increasingly moving from indirect to direct forms of procurement — from unbundled renewable energy credits (RECs) to offsite PPAs, for example. This is a key way to procure green power from large, offsite projects. But offsite PPAs are available only to companies in areas where a monopoly system of electric utilities has been replaced with competing sellers (as shown in this U.S. Energy Information Administration map). Through sleeved PPAs, however, the utility in a traditionally regulated market can serve as the go-between to help a company contract clean power via an offsite project.

For companies where a long-term PPA may not be feasible, there are other options. Green tariffs are an easy way for customers to opt-into their utility’s renewable energy portfolio, as long as the tariff can be structured to the customer’s needs. This is one of the newest purchasing options, an area expected to grow in the coming years.

For companies with onsite resources that remain grid connected, such as rooftop solar, energy storage or fuel cells, there are several purchasing structures. In some jurisdictions, companies have a range of options, but in others, legislation is needed to enable third-party ownership of onsite systems. And for companies that don’t have distributed energy resources onsite, community renewable energy is a growing option where the customer shares the output of a single nearby offsite clean power project with multiple customers, both residential and commercial, via a subscription-based model.

Google in 2016 announced it would be 100 percent renewably powered by 2017 for its entire global operations — that’s a whopping 2.6 GW of wind and solar. This required considerable ingenuity, and the declaration means something different depending on the location. The company’s agreements cover at least 20 projects in five countries, all as close as possible to the company’s far-flung data centers. That’s about $3.5 billion in capital investment, according to Neha Palmer, head of energy strategy, global infrastructure at Google.

But what about the smaller companies that don’t have the in-house energy expertise or massive cash reserves to tackle the complex deal structures often necessary to procure renewables? As the drum beats louder around this issue, creative solutions are emerging. 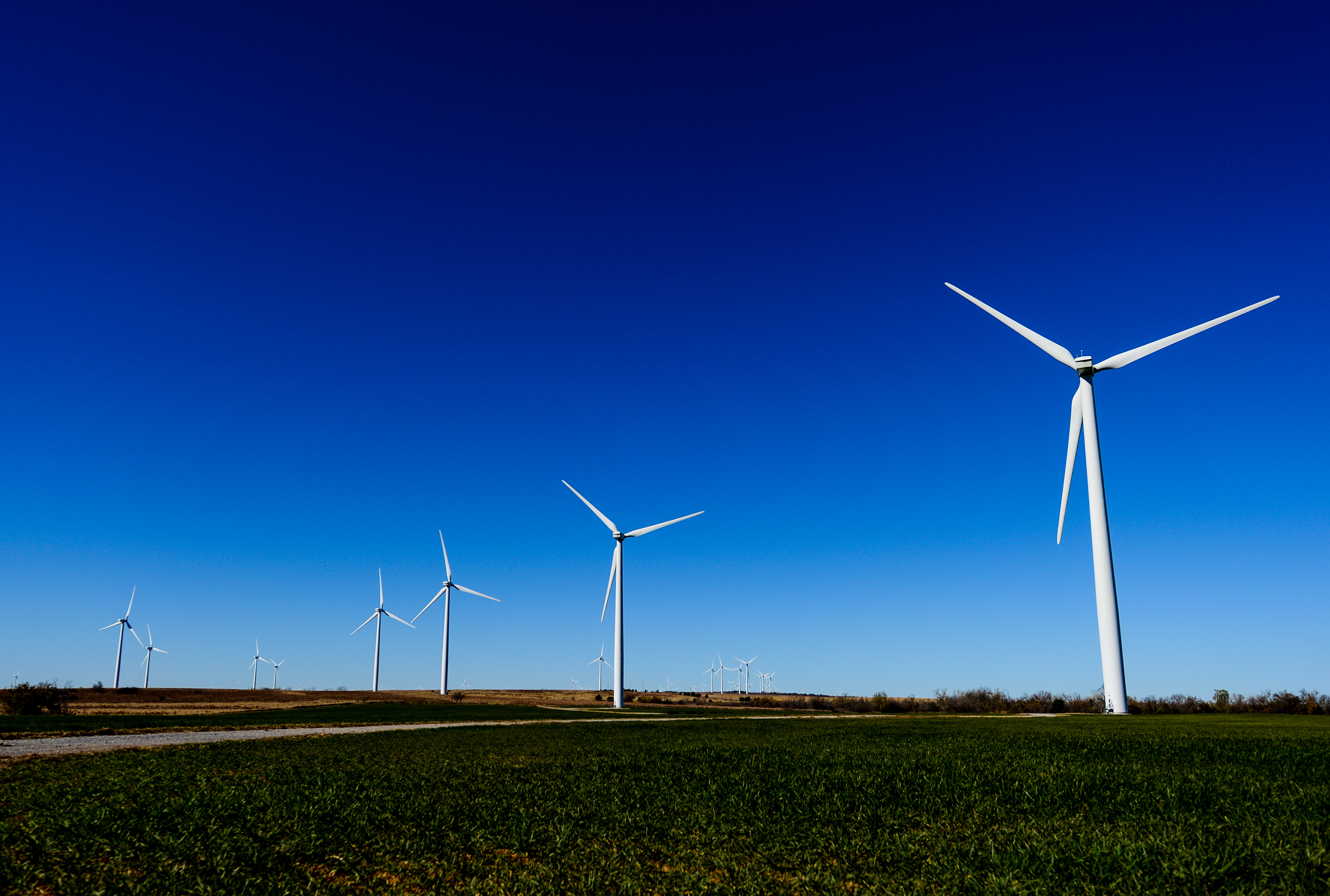 According to Rocky Mountain Institute’s Business Renewables Center, which has been instrumental in facilitating aggregated procurement models, these contracts need some sort of central organizer. Right now, several aggregation models are emerging, providing access to large-scale renewable energy projects for smaller businesses, real estate developers and institutions such as universities and hospitals. Companies as different as Etsy and Lockheed Martin are successfully leveraging this approach.

From a technology standpoint, wind is still the top source of renewable energy for corporate procurement. That said, solar power already costs less than traditional fossilfuel- powered plants in many locations, and both rooftop and utility-scale solar prices are expected to drop 30 percent more by 2020. Process and product innovations will continue to drive down the costs of solar, wind and battery systems, leading to higher adoption rates. The improvements ahead are likely to come from continuous innovation in materials science and design, and from rapidly scaling production. Automating installation, thus reducing labor costs — the biggest cost of most solar projects — is another area ripe for disruption.

Locking in energy prices and reducing an organization’s carbon footprint are two key drivers of corporate renewables procurement. But so is resilience. In areas vulnerable to natural disasters and other risk issues, microgrids — small and discrete hyperlocal electrical grids composed of primarily renewable energy sources — may become more of a corporate priority, as they can act independently of the grid when necessary. Technical challenges around grid interconnection and cybersecurity are still critical for many such projects, but solutions in these areas may be a longer-term prospect.

Speaking of utility challenges, there is mounting pressure on utilities to adapt more quickly to growing renewable energy demands, or face the reality that their largest corporate energy customers may decide to take things into their own hands. In 2016, Apple decided to become a wholesale green energy supplier. MGM Resorts International made the bold move to pay $86.9 million for the right to defect from Nevada Energy in order to get its renewable energy production from other sources (including its own solar installations). As Cindy Ortega, the company’s senior vice president and chief sustainability officer, put it, "We are leaving because it’s the next in a natural progression of building a world-class sustainability effort… It’s about being agile and smarter."

That should be a warning shot across the bow of every utility company.

Business Renewables Center — founded by Rocky Mountain Institute and several partners in 2015 with the aim of helping corporations procure solar, wind and other clean power. It seeks to help companies purchase 60 gigawatts of renewables by 2030.

Amazon —Was the largest corporate buyer of renewable energy in 2016, with its latest deal of five solar farms in Virginia announced in November. Considered in aggregate, contracts signed by the e-commerce and cloud services giant will bring about 580,000 megawatt-hours of clean power onto the grid.

Lockheed Martin — is allied closely with the federal government, said to be the second biggest buyer of clean power after Google. The defense contractor signed its first big solar power purchase agreement last year. Just as intriguing, it’s applying its substantial technology expertise to emerging technologies, such as tidal power.

Renewable Energy Buyers Alliance — is pushing for better access to longer-term, fixed-price contracts for clean power. As of September, more than 62 large companies, including Kellogg’s and Starwood Hotels, had stepped up to support the organization’s founding principles.