Paper recovery rose to a record 63.4 percent in 2009, with landfill paper deposits down nearly 40 percent since 2005. At the same time, the number of acres certified by the Forest Stewardship Council (FSC) has soared by 66 million acres during the last four years, according to a new report from the Environmental Paper Network (EPN).

"This shows how leadership by large purchasers in the marketplace is shifting demand for paper over to environmentally preferable solutions," said Joshua Martin, EPN director. "Paper suppliers are changing to meet that demand, and it's the corporate leadership of some of these large paper purchasers that is driving that."

"The State of the Paper Industry 2011: Steps Toward an Environmental Vision" is an update of a 2007 report EPN produced as a baseline to track progress on various facets of the sector, including paper consumption, production, recycling and fiber sourcing. EPN is a coalition of more than 100 social and conservation groups, including the Dogwood Alliance, Rainforest Action Network and National Wildlife Federation. 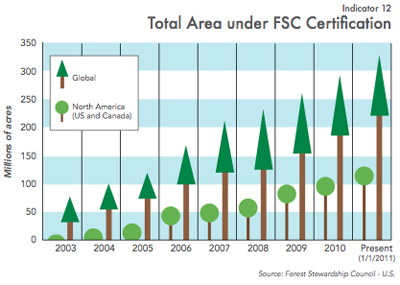 An EPN survey of its members identified at least 645 large paper purchasers -- 24 of which were Fortune 500 companies -- with sustainable paper policies in place, such as requirements for FSC-certified fiber or high proportions of post-consumer recycled content.

Martin also pointed out that leading companies are also joining NGOs for unprecedented levels of cooperation in the name of forest conservation. "We can see it leads to some of the major conservation agreements you can see in the report, where companies and conservationists are coming together around collaborative solutions to some of these gridlocks and battles over the forests," Martin said, pointing out a conservation deal in the Northern Boreal Forest of Canada involving Kimberly-Clark . "The changing marketplace dynamics has led to people coming to the table and seeking common ground."

On a per capita basis, the U.S. still uses an "obscene amount compared to everyone else in the world," Martin said. "We're 5 percent of the global population but use 17 percent of global paper." 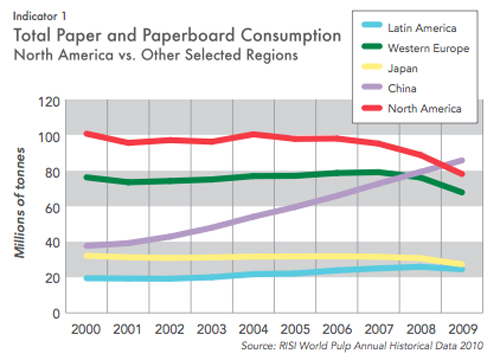 China overtook North America for the first time in total paper consumption, the report found, while recycled pulp exports to China have grown nearly three-fold since 2002. This could mean higher prices for domestic manufacturers as the supply of recovered fiber tightens.

There are a lot of hopeful statistics in the report suggesting progress in the pulp and paper sector, but the industry is still struggling with its massive environmental footprint, in terms of greenhouse gas emissions and water and energy use, Martin pointed out. And although North America is sending less paper to landfills, paper still represented 16 percent of landfill deposits in 2009 -- a whopping 26 million tons.