And four myths to bust when it comes to your professional use of social media.

Since the last time GreenBiz took a look at Twitter among the corporate sustainability leadership ranks, in 2014, smart Twitter use has not exactly exploded. While this doesn’t surprise me, it does frustrate me. To have any hope of reaching Paris Agreement intentions, why and how corporations are proceeding with sustainability goals never has been more important. Collectively, sustainability leaders are leaving a lot of momentum-building and information sharing opportunity on the table.

So, it's worth looking at new data on the topic of corporate sustainability influence. Onalytica, which specializes in marketing software and social media, helped us to compile and rank individuals who are leading the way in engagement and reach on Twitter.

What was true in the 2014 Twitterati ranking holds today: "In general, the leaders on this list have built a strong following — with high-ranked followers — and tweet with some regularity. They've built authority in the real world, and leveraged it to gain more thought leadership via social media."

Citizen-facing social media may have all sorts of problems these days, but its utility remains for the purposes of business or government-facing leadership development and building social capital. Just ask the leaders in this new ranking who've been on the platform for a while, such as Bruno Sarda, Neil Hawkin, Peggy Murphy (formerly Ward) and Lynelle Cameron.

The following chart represents leaders on Twitter in corporate sustainability, based upon Onalytica's research, which took into account impressions, relevance, reach and resonance. (Click for the full size PDF.)

A note on methodology: Onalytica used its discovery tool to look up the terms "Sustainability" and "CSR." I then sorted to include only folks currently working with corporations. Media (including GreenBiz Co-founder Joel Makower) and consultants (myself included) were removed from the list. Some people you may know as sustainability leaders on Twitter are not included, because "sustainability" was not included in their Twitter profiles. (This, I hope, will nudge some of you to re-write your Twitter bios.)

If this inspires you to expand or revive your usage of Twitter, consider the following three stubborn myths that persist about the platform:

Eyes glaze right over scripted and legally constrained corporate Twitter feeds. People are looking for individuals to follow. In the corporate sustainability world, people such as Sarda or Cameron are adding value to their companies, by adding personal passion and style to broader industry conversations. Their ability to be less structured and more human in their tone builds lasting engagement toward real influence.

In the four years since the last GreenBiz analysis, we actually have proof that building your own individual social capital is a tool you can carry with you. Consider Sarda again, who built up his social media engagement as Dell's Global Sustainability Operations Director and brought that existing influence right on over to his new role as VP, Sustainability at NRG Energy. Leaders "own" their engagement, and their affiliated corporations hugely benefit by having a leader with that existing platform. There are several examples of folks who used to be in corporate roles that now benefit from that same social capital as consultants, such as Aida Greenbury and Asheen Phansey.

The global COP21 Twitter conversation was another great indicator of the importance of individual leader, not organizational, social capital. In order to feel that you knew what was happening on the ground at that convening, you didn't monitor the UNFCCC stream, you followed Christiana Figueres. To get the sense of what the media was covering, you didn't necessarily focus in on The New York Times, but you did follow reporter Coral Davenport.

Wrong. Conference programmers are among those using Twitter to help research terms and trends for planning their themes and for finding leaders already sharing value on those topics. In addition, they are looking for speakers who clearly have this level of social capital.

Case in point: The Ceres communications team shared a speaker Twitter list just as its recent conference got rolling. That makes it easy for those leaders to be found by more journalists as well. 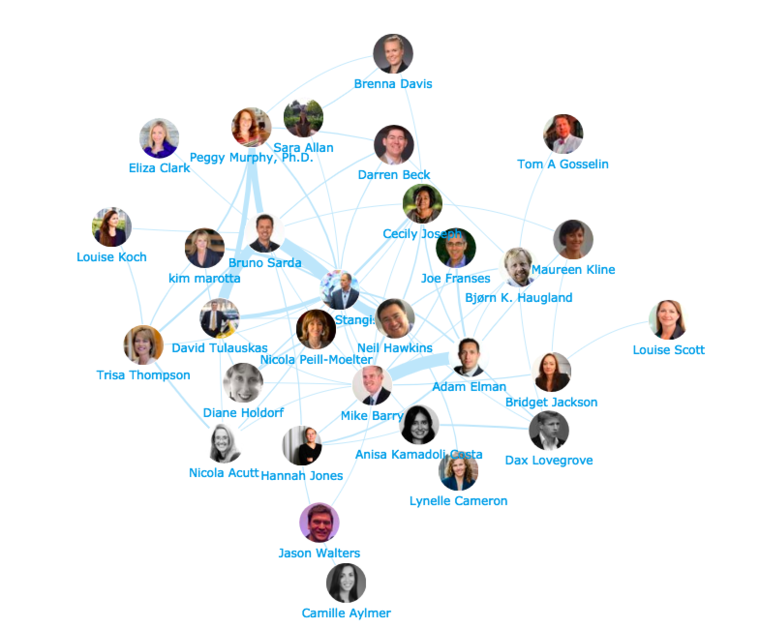 Marc Benioff of Salesforce is among the most famous CEOs using Twitter to build social capital around key issues. Well known for stepping out loudly in his renewable energy influence through organizations such as We Mean Business, a recent Harvard Business Review piece by Aaron K. Chatterji and Michael W. Toffel included Benioff’s views on the mainstreaming of CEO activism as well.

As Harvard Business Review reports, Benioff finds it critical to recruit other leaders to activism:

Called "the ringleader of CEO activists," Benioff pushes other executives to take stands and calls on employees of other firms to encourage their CEOs to speak out. "My number one goal is to help other CEOs recognize that they have permission to do this," he told us.

While Benioff's Twitter use isn't the only way he can inspire other leaders, being able to activate even a small percentage of his 987,000 followers (he joined Twitter in 2009) is an incredibly useful tool supporting his mission.

However, you can't activate anyone for any cause without a platform. The leading names in the sustainability Twitterati data are building an incredible advantage. My guess is that you see a name or two on the list that you already highly respect for their leadership and influence.

Now that you know Twitter has been part of their path, are you ready to join the corporate sustainability ringleaders?  Given the current climate-change situation, your "social" leadership is needed now more than ever.

How Sustainability Will De-Gender Corporate Leadership in 2011

See all by Andrea Learned