For all the blunt talk from President Trump on Thursday that "we’re getting out" of the Paris Agreement, experts note that the United States cannot legally begin to withdraw from the accord on mitigating climate change until November 2019 — and then it would take a year.

"Apparently the White House has no understanding of how an international treaty works," said Christiana Figueres, who led the Paris talks as the former executive secretary of the United Nations Framework Convention on Climate Change. "The White House would be able to state its intent to withdraw on Nov. 5, 2019, and not a day sooner." After that, the process would take a year.

By November 2020, anything could happen.

Among other things, there’s a good chance "the rest of the world will be galvanized" to salvage the Paris Agreement after Trump's talk of the United States withdrawing from it and will invest more money in clean energy, said California Gov. Jerry Brown.

In the immediate aftermath of the announcement, an avalanche of pledges to do just that began overwhelming social media and media inboxes — citing specific and myriad motivations ranging from the future of children's health, the urgent threat to coastal cities and some $13 trillion of economic opportunity in new low-carbon businesses. 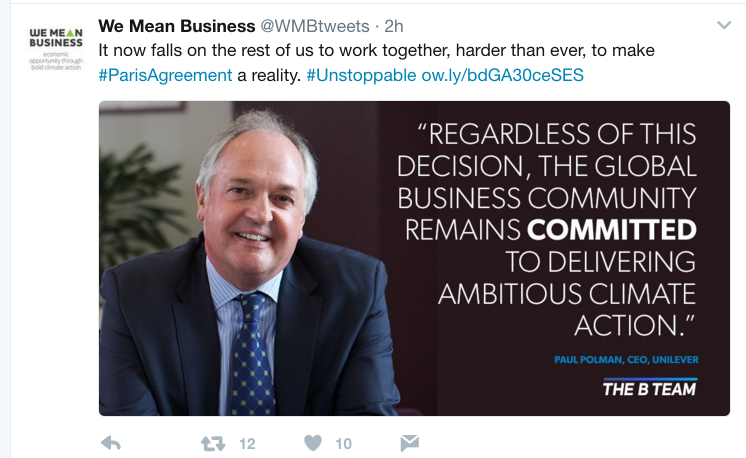 There’s already evidence that a galvanizing influence has occurred.

"The private sector in the last few years has come to life on this — 1,100 corporations urged President Trump to stay in the deal," and vowed they would continue investing in clean energy, said Andrew Steer, president and CEO of World Resources Institute (WRI).

Figueres, Brown, Steer and Mindy Lubber, president and CEO of the Ceres investor network, spoke to reporters on a conference call an hour after Trump announced his plans June 1. The call was organized by WRI.

Moreover, governors of New York, California and Washington — individual U.S. states that collectively represent the fifth largest economy in the world — along with 12 major U.S. major cities have pledged to pursue policies that will help their cities and communities meet the Paris Agreement's purpose of keeping global temperatures from rising 2 degrees Celsius.

Many major countries — most notably China, various members of the European Union (which jointly announced their renewed commitment to the landmark climate deal), Russia and India — also signaled that they plan to forge ahead with implementing the Paris Agreement. China, for one, committed to investing $360 billion in clean energy development.

Lubber noted that, despite Trump’s stated reasons of protecting the U.S. economy and jobs, some 30 CEOs from major U.S. corporations sent Trump a letter, which was also posted in major newspapers, urging him to stand by the Paris Agreement. "These are not tree huggers, these are leading industrialists," she said. Even the AFL-CIO, the largest labor union in the country, came out in favor of the accord.

The announcement may have eviscerated the credibility of the United States as a world leader.

What Trump’s big announcement may have done, however, is eviscerate the credibility of the United States as a world leader, the conference speakers said. "The question will be whether the next U.S. president can rescue this," Steer said.

He said that as a Brit who has watched the decline of the United Kingdom during the past several decades, "I know once you start declining it is extremely hard to reverse that. So what is going on today is profoundly important in terms of geopolitics."

On a practical level, the Trump administration already had signaled it would not be implementing the U.S. commitments to the Paris Agreement of reducing greenhouse gas emissions by 26 to 28 percent below 2005 levels by 2025:  Its budget proposal would slash funds for the Environmental Protection Agency, the Department of Energy and various research endeavors on climate solutions. The administration also has halted efforts to clear the U.S. Clean Power Plan from court challenges and already relaxed enforcement of some environmental regulations.

What happens next is up to the private sector, and to local and state governments.

On Thursday, there was no shortage of businesses willing to state their support of the Paris Agreement. From industrial manufacturers such as General Electric to oil companies such as Exxon Mobil to clothing companies such as the North Face, they emailed their concerns to reporters.

"We are opposed to the Trump administration’s choice to withdraw from the Paris Agreement," said James Rogers, senior sustainability manager of the North Face, in a missive typical of a deluge of corporate comments.

Influential CEOs joined a tweetstorm of criticism. Apple CEO Tim Cook, who reportedly called the White House in a last-minute attempt to change Trump's mind, said, "Decision to withdraw from the #ParisAgreeement was wrong for our planet. Apple is committed to fight climate change and we will never waver." And in his first tweet, Goldman Sachs CEO Lloyd Blankfein noted, "Today's decision is a setback for the environment and for the U.S.'s leadership position in the world."

As you can see, Tesla founder Elon Musk's comment was retweeted 155,000 times Thursday afternoon. By the next morning, that number had tripled.