Could perennial grains be the next climate-saving superstars?

A new cereal grain more than 40 years in the making is finding its way into the marketplace in several forms, including a new product from food giant General Mills. Some believe it carries the promise of a whole new type of staple crop — one that requires minimal plowing, fertilizers or pesticides — that also could become a weapon in the battle against climate change.

This is not some new food cooked up in a laboratory, but perhaps its antithesis. Kernza perennial grain, a relative of wheat, is the result of painstaking natural breeding by growers brought together by researchers at the Land Institute. Why would someone go to such an extraordinary effort? Because some believe Kernza represents a whole new type of perennial staple crop that could become a major weapon in the battle against climate change.

While the idea that certain plants can do a great deal to ease the climate crisis might be new to many people, the underlying science is not.

Farming has been responsible for releasing vast amounts of carbon dioxide from the soil into the atmosphere — up to 8 percent globally, with plowed annual croplands contributing to some of the largest releases, according to Tim Crews, director of research at the Land Institute in Salina, Kansas. The good news is that the process is reversible. Plants can pull CO2 out of the atmosphere and sequester it deep underground when cultivated in the right way.

"Soils hold, in organic forms, between two and three times the carbon that is contained in the atmosphere," Crews said. 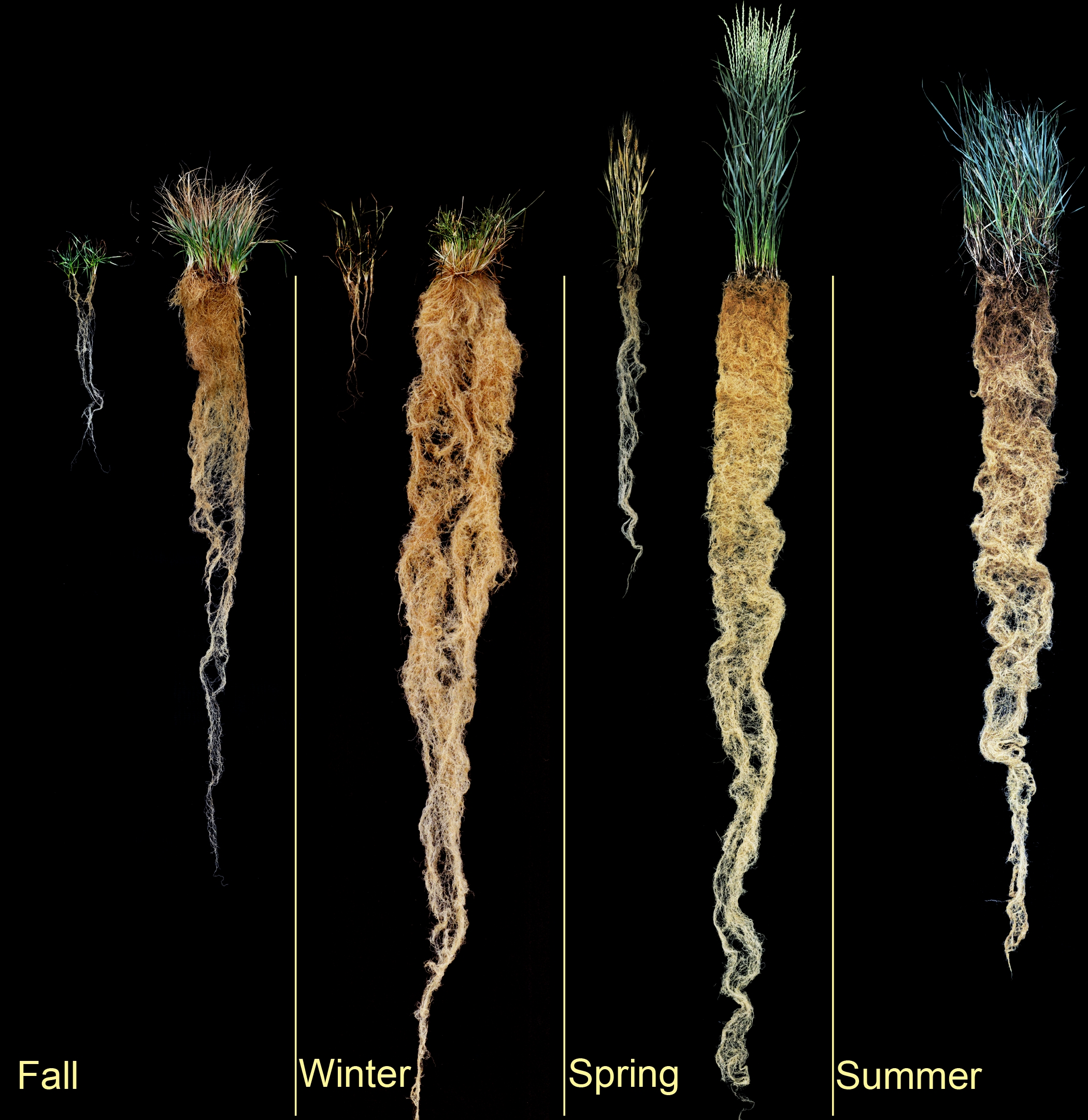 Land Institute founder Wes Jackson is a prairie philosopher with a Ph.D. in genetics. Growing up, he marveled at the inherent robustness of native prairie, especially when compared to the fragility and the increasing chemical dependency of the annual monocultures that constitute the American breadbasket. Every acre planted is an uphill battle against the natural order, which favors diverse perennial polycultures — deep-rooted, enduring plants that form synergistic communities that define the essence of resiliency as demonstrated by the Dust Bowl experience — when an extended drought hit the lower Midwest in the 1930s, turning tens of thousands of acres of native prairie that had been plowed up to plant wheat into massive, deadly clouds of dust. Meanwhile, the undisturbed prairie, with its deep roots and highly evolved survival traits, remained intact.

Jackson’s fundamental premise is that humankind took a wrong turn when it began plowing up the land and planting homogeneous annual crops. As he told Modern Farmer, "… there was a dualism that developed — wild nature, with virtually no soil erosion, and then us with the plow... Now we have not only soil erosion but chemical contamination of the land and water with fertilizers and pesticides and so on." Now, 40 years later, Jackson has moved beyond philosophizing.

Brewing up a new grain

While annuals typically propagate by means of seeds borne on the wind, Kernza mainly has spread via human networks. Lee Dehaan is the Land Institute plant breeder responsible for its development. Once he determined he had reached a point where the crop was showing promise, Dehaan gave seeds to farmers such as Jack Erisman in Illinois and colleagues at the University of Minnesota. Their Forever Green research program has been collaborating on Kernza development ever since, looking for ways to improve yields and other desirable characteristics.

Plovgh is a Wisconsin-based company that merchandises small, non-commodity crops, kind of like a boutique supplier of grain. It is responsible for developing the commercial supply chain for Kernza.

CEO Elizabeth Haucke ran down the list of Kernza’s ecological benefits. "Kernza is part of this larger category that seems to be emerging of crops that are actually beneficial to the soil and sequester carbon," she said. Using it allows companies "to improve their sustainability profile by simply changing ingredients." Plovgh receives hundreds of inquiries every year from farmers who want to grow Kernza, more than it can fulfill, and large companies are studying it, Haucke said.

Kernza is part of this larger category that seems to be emerging of crops that are actually beneficial to the soil and sequester carbon.

Patagonia Founder and CEO Yvon Chouinard and Wes Jackson have known each other a long time. Last year, Chouinard produced a documentary film about the Land Institute and other agricultural pioneers. Soon after, it launched the Patagonia Provisions brand, claiming that it could have more impact with food than with clothing. Last year, Patagonia introduced Long Root Ale, brewed from Kernza in Portland, Oregon.

During that same time frame, General Mills embraced a sustainability strategy that engages deeply with restorative agriculture, with its emphasis on soil health. It formed a partnership with the Nature Conservancy, the Soil Health Institute and the Soil Health Partnership, to produce a soil health roadmap titled "reThink Soil."

Given the emphasis on principles such as retaining cover crops year-round and reducing tillage, it isn't surprising that a nutritious perennial grain such as Kernza would attract General Mills' attention. Jerry Lynch, chief sustainability officer for General Mills, told GreenBiz that the company particularly likes "the way that [Kernza] leverages perennialism and builds soil health to address so many environmental objectives, while at the same time, producing a crop that can potentially be used in products."

According to Laura Hansen, R&D project lead for General Mills, the company first learned about Kernza through its partnership with Forever Green. It screened the grain against its product portfolio and found several places where it potentially could fit. Given that this an entirely new grain that is still evolving, there are plenty of challenges along the supply chain, Hansen said. Still, General Mills expects to release its first Kernza-derived product under the Cascadian Farm brand within 12-18 months.

The first step in a long journey

Acceptance of Kernza by food giants such as General Mills represents only the first step in Wes Jackson’s long-term vision of a Natural Systems Agriculture, that emulates native prairie with perennial polycultures. This new form of agriculture, Jackson said, if properly designed "should virtually eliminate the ecological degradation characteristic of conventional agriculture and minimize the need for human intervention."

Up next likely will be a biculture of Kernza grown together with a legume, such as alfalfa, to provide nutrients. That idea was demonstrated at this year’s Prairie Festival, along with several other perennial crops in development, including silphium, a relative of the sunflower, which will be grown for its oil; perennial sorghum, now being tested in sub-Saharan Africa; and various other varieties of perennial wheat.