Could Trump's presidency be a gift in disguise?

Anyone who subscribes to the hydraulic ("what-goes-up-must-inevitably-come-down") theory of history probably sensed that with 2015 ending on such a fanfare of high notes — including the Pope’s Laudato si encyclical, the U.N. Sustainable Development Goals and the Paris climate agreement — the only way left for the global sustainability industry was down.

Now with the victorious Trumpeteers stomping around the walls of yesterday’s certainties, 2016 looks set to join a list of years — including 1914, 1929, 1939, 1989 and 2008 — where old orders began to come apart at the seams. Time and again, any new orders were either nowhere to be seen or to be found fidgeting on the sidelines.

As it happened, I found myself on the sidelines when the U.K. voted on whether to leave the European Union, although I had dutifully filed a postal vote. I was visiting cacao plantations in the Côte d’Ivoire. My own fidgeting was partly explained by the fact that several large, highly aggressive ants had worked their way up my trouser legs, but I had other concerns. Despite encouragement from colleagues, including a rapidly conjured cake to celebrate my birthday, I had been gloomy for days.

As several of us headed out to the airport on the day of the vote, a senior Nestlé figure thrust his iPad in front of me, displaying share movements across his pension portfolio. The screen blazed bright green, indicating big market bets on an impending "Remain" vote. "Don’t worry," he reassured, "The markets know best." I didn’t buy the thesis then. After our flight arrived at Charles de Gaulle airport, I was relieved I wasn’t around to see his iPad display burn red as once unimaginable results flushed through the economic system.

Not my happiest birthday, but at least I wasn’t born on Nov. 8. That was the day when our semi-hydraulic theory of economic history began to look painfully close to the mark. If the underlying thesis is even partially correct, expect 2017 to be even more turbulent — although I wouldn’t yet go as far as Bloomberg Businessweek in its Pessimist’s Guide to the New Year.

The U-bend of history

Of course, things may turn out way better than we fear, despite what our analysis suggests. To cut a longish story short, since 1994 we have tracked a series of societal pressure waves in the Global North. Increasingly, we are also tracking the way they are impacting — and influenced by — deeper-running long-wave economic cycles of the type spotlighted by economists such as Nikolai Kondratiev and Joseph Schumpeter.

I trailed elements of the story at last year’s VERGE event in Santa Clara, arguing that we are moving from a fifth long-wave cycle (1980-2015, for the sake of argument) to a sixth (say, 2016-2050). In the process, we seem to be headed into another "U-bend of history" (see diagram below), with previous experience suggesting that we will emerge into a world transformed in ways that once would have been unimaginable.

When old orders implode faster than new ones can self-assemble, the levels of confusion, uncertainty and fear can go off the scale — as indicated by the shaded area in the U-bend diagram, extracted from our 2016 Breakthrough Business Models (PDF) report for the Business & Sustainable Development Commission. 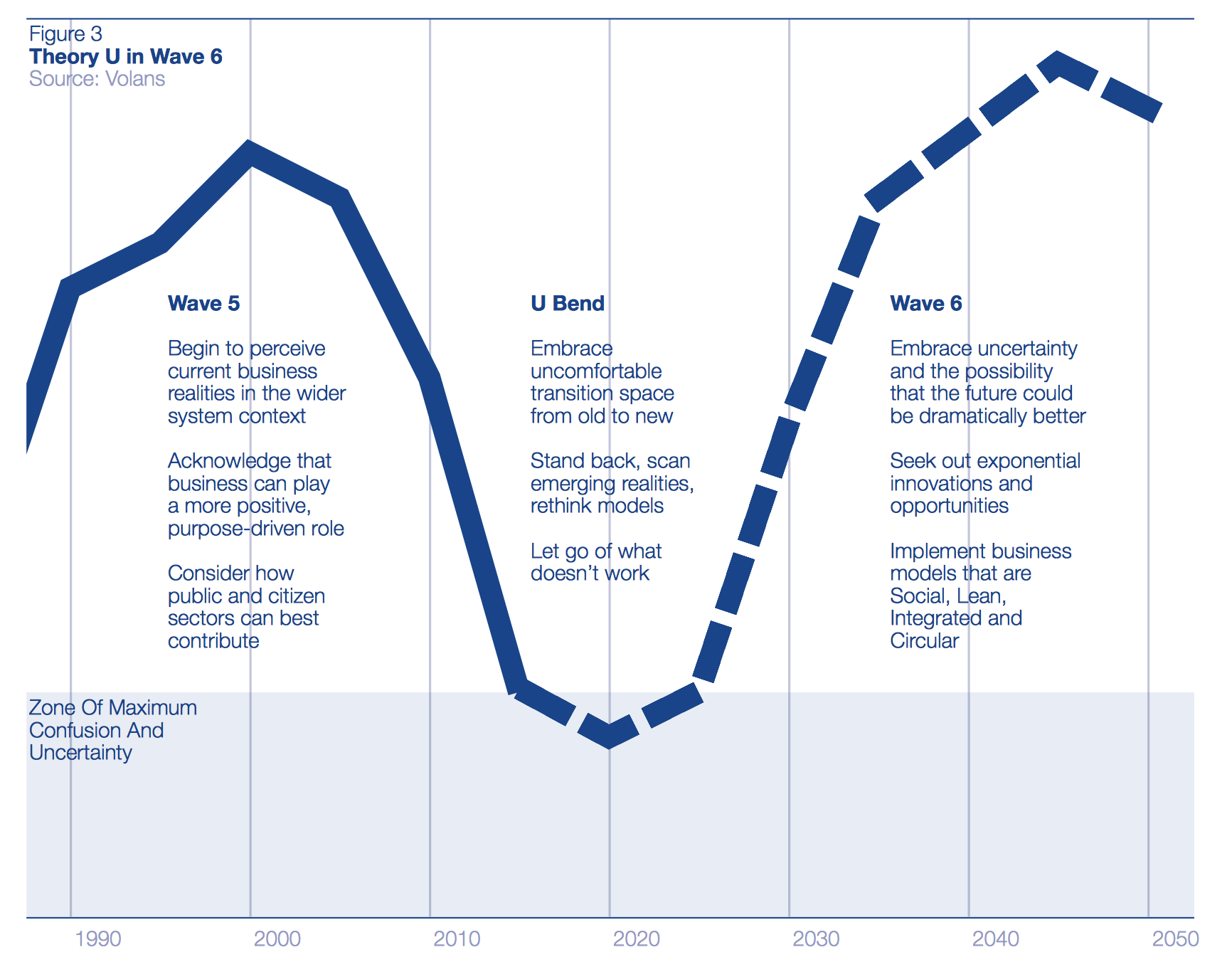 Like most people, we have been trying to make sense of the much-discussed "post-facts," "post-truth" disorder for our chances of delivering even a significant slice of the Sustainable Development Goals by the due delivery date of 2030.

In this 30th anniversary year of the Brundtland Commission version of the sustainable business agenda, we must fight the coming war of ideas on multiple fronts.

As Trump’s political appointees get to work shoring up the old, climate-destabilizing order and undermining the U.S. Environmental Protection Agency, we expect that 2017 will see intensifying rearguard actions to defend (and even build on) past achievements. But the lessons of history suggest that it would be a cardinal error to allow ourselves to become bogged down in the trenches yet again.

Instead, in this 30th anniversary year of the Brundtland Commission version of the sustainable business agenda, we must fight the coming war of ideas on multiple fronts: warding off breakdowns at the same time as we drive breakthrough changes that the future would call for and invest in if it had a voice in today’s world.

Which brings me back to the work of someone often recommended to me, particularly by friends at companies such as innovation and marketing leader Nike. Otto Scharmer, co-founder of U.lab, is renowned for his Theory U. In a recent blog for the Huffington Post he argued, counterintuitively, that the president-elect ultimately could prove to have been a gift for those aiming to drive systemic change.

"Donald Trump," Scharmer said, "is to democracy what 2008 was to capitalism: a profound wake-up call reminding us that the system is broken and in urgent need of an 'upgrade' that will bring it up to speed with the challenges of our time."

Donald Trump is to democracy what 2008 was to capitalism: a profound wake-up call reminding us that the system is broken and in urgent need of an 'upgrade' that will bring it up to speed with the challenges of our time.

Whatever your commitments may be for 2017, he counsels,

[…] Keep in mind that experience is not what happens to us — but what we do with what happens to us. We already know what to expect: chaos, confusion and occasional collapse. Most of these events are already out of our control. So what do we control? We control how we respond. Will we amplify the problem by closing our minds, hearts and wills? Or will we open up by suspending our habits of judgment, accessing our empathy and summoning our courage to let go of the old and lean into the new?

So here’s a suggested New Year’s Resolution for anyone who hasn’t already done so: Let’s prepare to rise to the challenges ahead as we work our way through this giant historical U-bend by immersing ourselves in Otto Scharmer’s U-niverse. I should have done it years ago, but hopefully it’s never too late to go back to school.