Coyuchi, full circularity and the challenge of textile recycling

Home textiles company Coyuchi has been ahead of the curve on sustainable business practices since its founding almost 30 years ago.

"The original founder was really one of the pioneers in organic cotton, bringing organic cotton into textile supply," said Coyuchi CEO Eileen Mockus, previously a sourcing executive for retailer Williams-Sonoma. "Over the years, we have really focused on the pillars of the brand, which are organic and natural fibers."

Coyuchi has adopted the Global Organic Textile Standard, the world’s leading processing guideline for textiles made from organic fibers, and gone beyond what that standard requires to make sure that it makes its products in a way that is safe for the planet and its customers, Mockus said.

Now it is leveling up and working to reach full circularity, using various methods — take back, subscription service, textile recycling — to keep its products out of landfills and instead in the homes of customers. "I think there's an opportunity to cut down on some of the subsequent processing that has an environmental impact that will allow us to continue to take what's already here and use it again," Mockus said.

I think there's an opportunity to cut down on some of the subsequent processing that has an environmental impact that will allow us to continue to take what's already here and use it again.

Coyuchi wants to be a proof of concept that textile recycling on a larger scale is possible.

"What I’d like to see us be able to do next is continue to work across the industry on how to do more of this and create some of the background systems that need to be in place," she said. "So that it is possible to recycle more of our textiles, whether they're Coyuchi organic textiles or some of the other products that are out on the market."

So, what does it take to work toward reaching full circularity in textile recycling?

How Coyuchi is getting it done

Mockus said a conversation with a member of Coyuchi’s board of directors — who had reread the book "Cradle to Cradle: Remaking the Way We Make Things" and asked her what the possibilities were for the company — led her to think about how Coyuchi might introduce textile recycling.

"[I] was thrilled to discover that there was so much activity going on in the space. That it was very possible for us to kind of take a different look at how we wanted to view our business," Mockus said. "And so we started with Coyuchi For Life, because it's a way of engaging the customer right away."

To achieve the goals of its circular economy efforts, including its subscription service Coyuchi For Life, Coyuchi has partnered with The Renewable Workshop, a company that provides circular solutions to apparel and textile brands. The Renewal Workshop has worked with other companies — for example, Carhartt, Mara Hoffman and The North Face — to launch similar programs.

With Coyuchi For Life, customers can choose to receive new linens every six, 12 or 24 months. After the set period of time, customers can renew, exchange, buy out or return their products. When The Renewal Workshop receives a returned item, it inspects the product to figure out its best next life — renewing it by making a repair or recycling the textile for some potential future use. The inspector makes sure that there are no signs of wear or stains and, if it's necessary to repair, ensures that the fix wouldn't be visible on the product.

"It's actually harder to do that with home goods than a jacket because we can hide a hole inside of an arm of a jacket. But when you have a sheet, you see all sides of it," said Nicole Bassett, cofounder at The Renewal Workshop, noting that it has a strict standard for what items can be renewed.

If a product meets the standard, it is fixed as needed then sold in Coyuchi’s brick-and-mortar store in Point Reyes, California, through Coyuchi 2nd Home, a take-back program that works in conjunction with Coyuchi For Life. If the item isn't repairable, The Renewal Workshop keeps the material.

The Coyuchi For Life program has had over 2,000 subscriptions, and Coyuchi said it continues to see growth. Additionally, it has diverted over 19,000 pounds of textiles from the landfill through its programs. 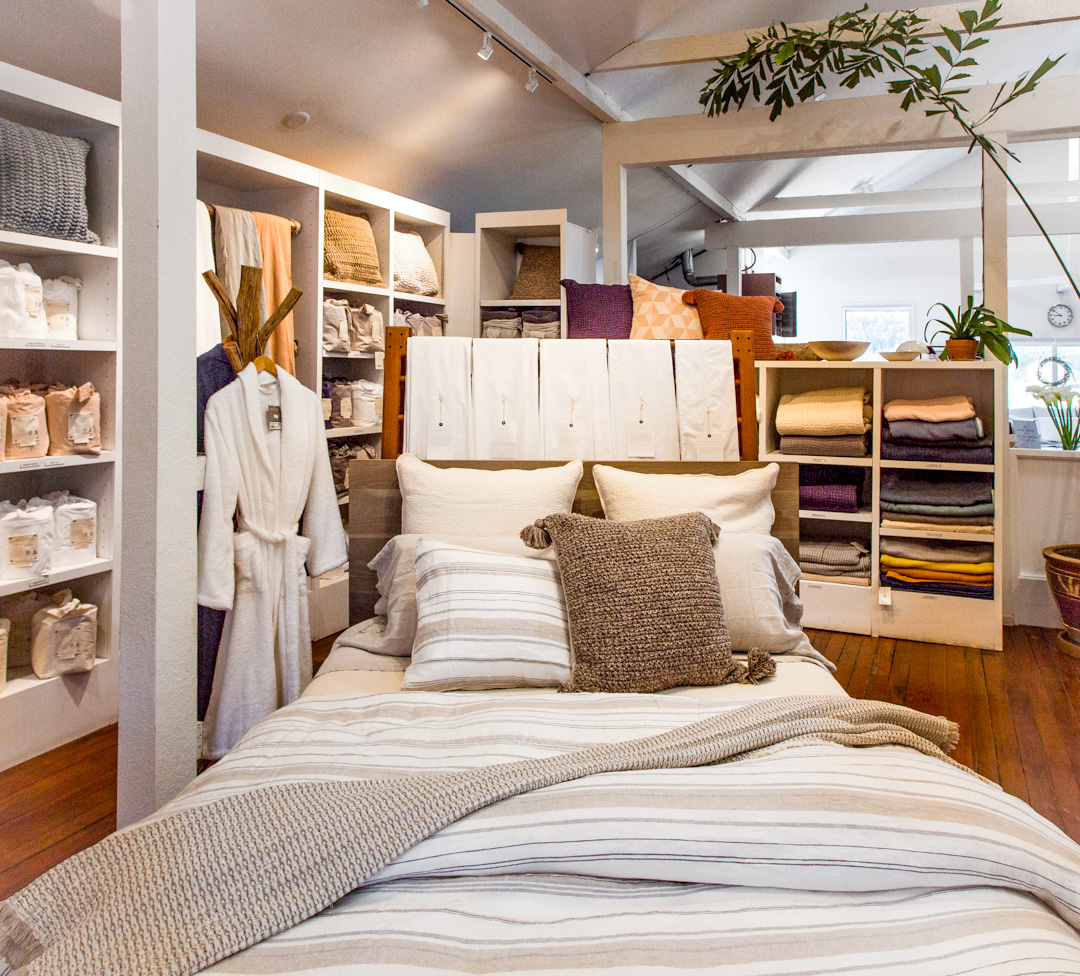 "We have intentionally only offered the renewed product in our own retail shop because we wanted to be able to understand what messaging the customer responded to and have that one-on-one interaction with being able to explain the story of what we're doing, rather than kind of going either to a third party's website or trying to do it online at all," Mockus said.

While, at this point, Coyuchi cannot repurpose all items for their original purpose, Coyuchi and The Renewal Workshop came up with a new use for the returned items that are not in good enough condition to be refurbished and resold.

"We identified probably in late 2018, we had enough product collected over the years of items that were too damaged to actually get resold again, but that could become feedstock for new products," Bassett said. "It's one of the first stories of brands actually demonstrating circular within the textile space."

Mockus said a fair amount of the legwork to figure out how Coyuchi could make a recycled product came from one of its production managers who also oversees its sustainability program. Coyuchi had to coordinate with vendors, manufacturers, recyclers and The Renewal Workshop to figure out how to make its programs work.

"I would say that those conversations went on for at least a year before we were able to ship the product to be recycled to the recycler. It's a lot of coordination," Mockus said, noting that there were a lot of variables to work out ahead of time to be able to increase their likelihood of success. Coyuchi had to make sure that every link in its supply chain understood its role and all the tasks that needed to be done — from figuring out the amount of materials that would be recycled to what the resulting product from the recycled textile would be.

The feedstock that can't be repaired and resold for its original use is being turned into blankets that are the equivalent quality to what Coyuchi sells on its website today. Coyuchi plans to start selling the blanket — made from "a blend of new and recycled Coyuchi material" — in fall 2020, Mockus said.

"We have a product that is poised and ready to be incorporated into a circular system," she said. "And what we're now taking the next step to do is be able to offer a product that is actually going to be made out of our fiber that was recycled."

The challenges and future of textile recycling

Coyuchi is already starting from a baseline that is leaps and bounds away from other companies that want to adopt circular production processes. Unlike many companies that make apparel, Coychi’s products are more recyclable because they don’t mix materials and the materials they do use are organic.

"That's one of the core principles in circular design. And so that means that at the end of the life of that product, we could do something with it. Whereas when you have a ski jacket made out of nylon, polyester, it's much more complicated to actually recycle that piece," Bassett said.

Improving textile recycling is a focus of a project called Accelerating Circularity, which receives funding from Walmart, Gap, Target and VF Corp, many of which are also part of the project’s working group. Mockus is a board member for the group, and The Renewal Workshop is a collaborator.

In 2017, only about 15 percent of textiles were recycled, according to the U.S. Environmental Protection Agency, and an even smaller percentage is actually recycled into new fabrics. As it stands, it’s challenging to increase that percentage because there is a lack of infrastructure to recycle textiles.

We might see more materials, more recycling entities come into commercialization, but I've been surprised how slow it has been.

"I think it's less than 1 percent of materials that are recycled actually go into making new fibers and make new fabrics," said Karla Magruder, founder of Fabrikology International, a sustainable textile consultancy, and the lead for Accelerating Circularity. "A lot of waste textile waste that gets recycled gets turned into things like carpet padding."

Bassett said that textile recycling has not improved much between 2016, when she co-founded her company and did an analysis of the sector, and 2020, when it ran another analysis.

"If there's a lot more investment that happens in textile recycling over the years, we might see more materials, more recycling entities come into commercialization, but I've been surprised how slow it has been," she said.

There is a lot of room for improvement when it comes to textile recycling, and Bassett says that companies need to start now, even if they won’t achieve 100 percent recyclability at first.

"What we find is about 75 percent of what was considered textile waste at the brand level — from take back or at the distribution center — can be cleaned and repaired and resold again," she said. "That's substantial because now we're at least diverting 75 percent out of the landfill and getting it back into sale."