Dairy farmers move ahead on sustainability

<p style="margin-top:.1pt;margin-right:0in;margin-bottom:.1pt;margin-left:0in">Most do not report carbon emissions, water use or conditions for animals. Yet some are taking the lead using new tools.</p>

As a fourth-generation farmer, Bob Foster worked for decades under his father and uncles as they taught him how to run Foster Brothers Farms, his family's 1,800-acre dairy tucked away in Middlebury, Vt.

When he was growing up, following sustainable practices was not always front and center of the industry’s business strategy.

“As a kid, it was okay to mix the bags of superphosphate in with the manure,” Foster said.

But the energy crisis of the 1970s spurred an awakening. “We had one of the last loads of fuel and we were trying to harvest crops,” he said. The situation jump-started his efforts to lower his farm’s carbon footprint through a closed loop system.

In 1982, the farm installed an onsite anaerobic digester. Since then, it has been producing electricity and compost from cow manure. So in addition to the 1.4 million gallons of milk it produces each year, Foster Brothers also sells excess electricity to the grid and compost varieties to regional farms.

But for all his efforts towards becoming a more sustainable producer, Foster was frustrated that companies looking to buy his products had a different approach towards measuring emissions and the farm’s carbon footprint.

Although many companies circulated questionnaires asking what his farm was doing to monitor its emissions and shrink its carbon footprint, Foster didn’t think they were asking the right questions. “A lot of the scorecards when you push it down to the farm gate don’t measure up,” he said.

So Foster joined efforts with Agri-Mark (a dairy co-op Foster Brothers belongs to) and over 40 other Northeastern dairy producers working alongside the Manomet Center for Conservation Science to develop the Vital Capital Index. Released in 2010, it was the U.S. dairy industry’s first effort to measure impact on a social, environmental and economic level.

Now, a national effort to standardize the way U.S. dairy producers are measured in the same three areas is almost complete.

The industry-funded organization leading the efforts, the Innovation Center for U.S. Dairy, says that the new framework is a science-based tool for dairy producers and processors to benchmark their own progress. It enables them to report data on a variety of indicators such as their energy and water use, greenhouse gas emissions, working conditions, animal care and impacts on the local economy. Indicators were developed in collaboration with dairy producers and processors, nongovernmental organizations, academics and companies that purchase dairy products as part of their supply chain.

The framework -- detailed in a document titled the Stewardship and Sustainability Guide for U.S. Dairy -- is an evolution of the work the Innovation Center started in 2008. In 2009, the industry had made a voluntary commitment to reduce 25 percent of its greenhouse gas emissions from milk by 2020. So when the Vital Capital Index was released one year later, the Center was ready to build upon and expand those efforts.

The Center hopes that the framework will enable both companies and consumers to better understand dairy’s impact on the supply chain.

“It allows for standardization in communication and consistent definitions throughout the industry,” said Sandra Vijn, a sustainability metrics specialist at the Center who is leading the effort. “We want the producers and processors to tell their own sustainability story.” 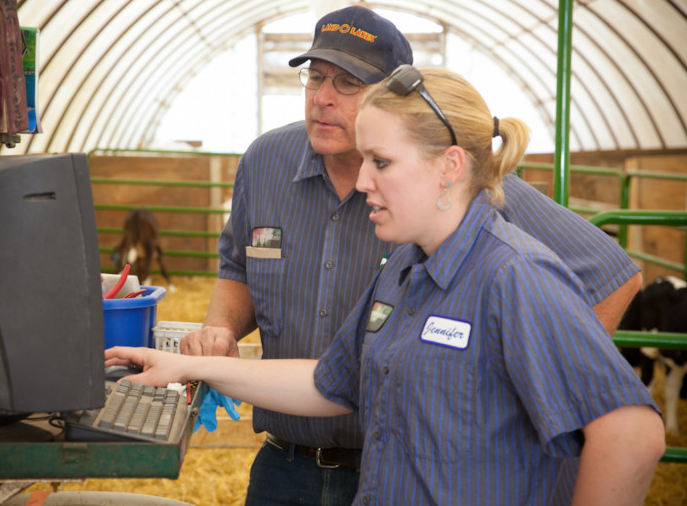 The indicators are based on several performance indicators from the Global Reporting Initiative (GRI) guidelines that Vijn helped to develop.

Yet considering that most in the industry do not report on sustainability issues at all -- and that using the Center’s framework is voluntary -- how much can the effort really standardize sustainability reporting? Will it really help conscientious consumers decide which brand of milk, yogurt or cheese to buy when one farm reports progress on sustainability using the framework and another does not?

Even if both did participate, applications still appear limited. The Center emphasizes that reporting results should be used as to benchmark one’s own progress, not as a comparison tool.

Still, Foster says that if companies adopt the framework as an evaluation tool -- and if the questions asked are those his peers have the data to answer -- an enormous amount of time would be saved when responding to each questionnaire.

“We take all of the questionnaires at the moment and boil it down to the questions we most want to ask our farmers,” he said. “The next month we get a whole bunch more, but the next month [they’re] slightly different. More than once we have to go back -- which is too much to bother them for information when they have to stop and pull it together.

“As a dairy industry, if we can help our customers ask better questions of us, we can give better answers."

One such example of a poorly developed question, Foster and Davis agreed, was one asking about the source of the cows’ feed when not all dairies grow their own crops; sometimes, the source can change from one week’s delivery to the next.

But compared to its sister industries in agriculture such as beef, soybean and corn -- dairy appears ahead of the game. (While hackathons held recently in Silicon Valley and New York in pursuit of a more sustainable meat industry appear to be fostering a new wave of innovative ventures between farmers, hackers and entrepreneurs, they were not organized by an industry association).

What the beef industry just started doing last year  -- pulling together a group of stakeholders together at a sustainability "roundtable" -- is what the dairy industry did in 2008 with the first of its sustainability councils, Davis said.

Earlier this year, the Center’s framework was pilot tested by a group of dairy producers and processors in different regions of the country. Testers were provided with a suite of location-specific tools (for a farm, processing plant or fleet) and handbook for guidance and support in how to report using the framework. And on July 14, the Center will wrap up a 60-day stakeholder comment period on the framework.

But plans for third-party certification are not in the immediate future. “We think that by working through a multistakeholder process, basing it on science, and getting nongovernmental organizations and customer feedback brings credibility to the process,” Vijn said.

GRI has reviewed the indicators to make sure they’re in line with its own, and the Center has been working with the Carbon Disclosure Project on processor indicators, she added.

Next, the Center will be working with the University of Wisconsin-Madison and a larger group of academic institutions and USDA labs to study how the industry can adapt their production methods to a changing climate. It has the support of a $10 million grant from the U.S. Department of Agriculture.

“It’s not a complete picture yet,” Vijn said. “Greenhouse gas and energy is one thing, but we also want to make sure we bring in other indicators over the years."