Dharamsala, India —There's one final story to tell before we depart Dharamsala. It's not related to anything environmental. It's about the Dalai Lama's shoes.

As I explained in my last post, my wife, Randy, is curating a major exhibition titled The Missing Peace: Artists Consider the Dalai Lama, in which more than 75 artists from around the world are creating artworks that depict the Dalai Lama, his values, and his world.

One of those artists is Sylvie Fleury, a Swiss installation artist. For the exhibition, Fleury wanted to use a process called kirlian photography to portray the Dalai Lama's aura. Toward that goal, she asked Randy to procure something that belonged to the Dalai Lama that she could use to photograph the aura. So, Randy worked through channels to do that. 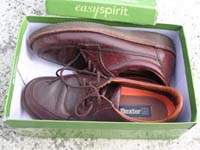 When they arrived at our home, the first notable thing was the shoebox in which they had been packed. The brand of the shoebox: Easy Spirit. Clearly, someone back at headquarters was having a little fun with this.

As we sat around admiring the shoes, it was tempting to want to try them on — how many of us can say we have walked in the Dalai Lama's shoes? But we resisted the temptation — after all, we didn't want to mess with the aura. (Besides, the shoes wouldn't have fit: My feet are a full size larger.)

And so the Dexters were dutifully repacked for shipment to the artist in Switzerland. Since I was the next one heading out the door that day, I was tasked with delivering them to Fedex. And because this was an international shipment, there was some paperwork involved.

The Fedex clerk asked, "What's in the box?"

She persisted. "Anything special about them?"

"Do they have any special value? Are they fragile or breakable?"

And all the time I wanted to tell her: "THEY'RE THE DALAI LAMA'S SHOES!"

I couldn't, of course, because the paperwork would no doubt have tripled.

In our audience with the Dalai Lama this week, I told him this story about his shoes. He chuckled along appreciatively and joked that since the shoes had been resoled several times, the resulting aura might well be that of his cobbler.

But he got serious when I mentioned how we had been tempted to try them on — to "walk in the Dalai Lama's shoes." And I assured him we hadn't.

To which he replied, simply but sternly: "Good."

But there's a bigger story here than a mere encounter with a great man's footwear. Tenzin Tethong, former chair of the Dalai Lama's cabinet, who now teaches at Stanford (and chairs the Committee of 100 for Tibet, one of the sponsors of The Missing Peace), says that the goal of the exhibition should not be about hero worship, or even the fight for Tibetan freedom. And it's not about how we become the Dalai Lama, or walk in his shoes.

Postscript, July 2007: My wife received the following e-mail from David Pearl of Yarmouth, Maine, which I am pleased to share:

I am a high school teacher in Maine and my grandfather made the Dali Lama's shoes.

My friend was at The Missing Peace exhibit in New York City when he called while standing in front of a photograph of the Dali Lama's shoes. The Dali Lama became an international symbol of peace while walking in my grandfather's shoes.

My grandfather, Harold Alfond is 93 years old and still lives in Belgrade Lakes, Maine near the town where he first opened a shoe factory in 1940. My grandfather was a very successful businessman and his Dexter Shoe company produced more than 100 million shoes, most of them hand-stitched right here in central Maine.

What makes the story even more remarkable is that my grandfather is one of the Maine's leading philanthropists. In 1950, at the age of 36 my grandfather created the first private foundation in the State of Maine. Since then the Harold Alfond Foundation has dispersed well over $100 million in charitable contributions. Much of that philanthropy has been targeted to central and rural Maine.

My grandfather has spent a lifetime giving. His positive spirit and dedication to philanthropy is the primary reason that I decided to become a teacher. It also makes the news that the Dali Lama wore his shoes even more wonderful.

The Dalai Lama and the Rivers of Tibet

The Dalai Lama on the responsibility of business