Danone North America dishes about how to be B Corp

It’s been just under one year since Danone North America became the world’s largest B Corp, a process that took about 12 months — far quicker than the original three-year timeline the food company set when it began merging its U.S. operations with WhiteWave Foods.

And it’s a distinction that the company behind brands such as Dannon yogurt, Horizon Organic milk and Silk plant-based beverages still holds, although other giants — including Unilever (parent of certified B Corp Ben & Jerry’s) and at least a dozen others — are evaluating the framework.

That merger, as it turns out, helped accelerate the B Corp certification because the integration teams already were reviewing and rationalizing virtually every internal process anyway, according to Deanna Bratter, the former WhiteWave executive who managed the project.

"When we started looking at what it takes, we realized that we were a lot further along than we thought," she said.

At the same time, the operating considerations that are part of the B Corp recipe guided decisions about which policies to keep, which to revise and which to leave behind.

"B Corp doesn’t just give you a certification — it gives you a benchmark to understand where you are, what your strengths are, what your opportunities are and what best practices potentially look like," Bratter, now senior director of public benefit and sustainable development for Danone N.A., told me during a conversation in late 2018. 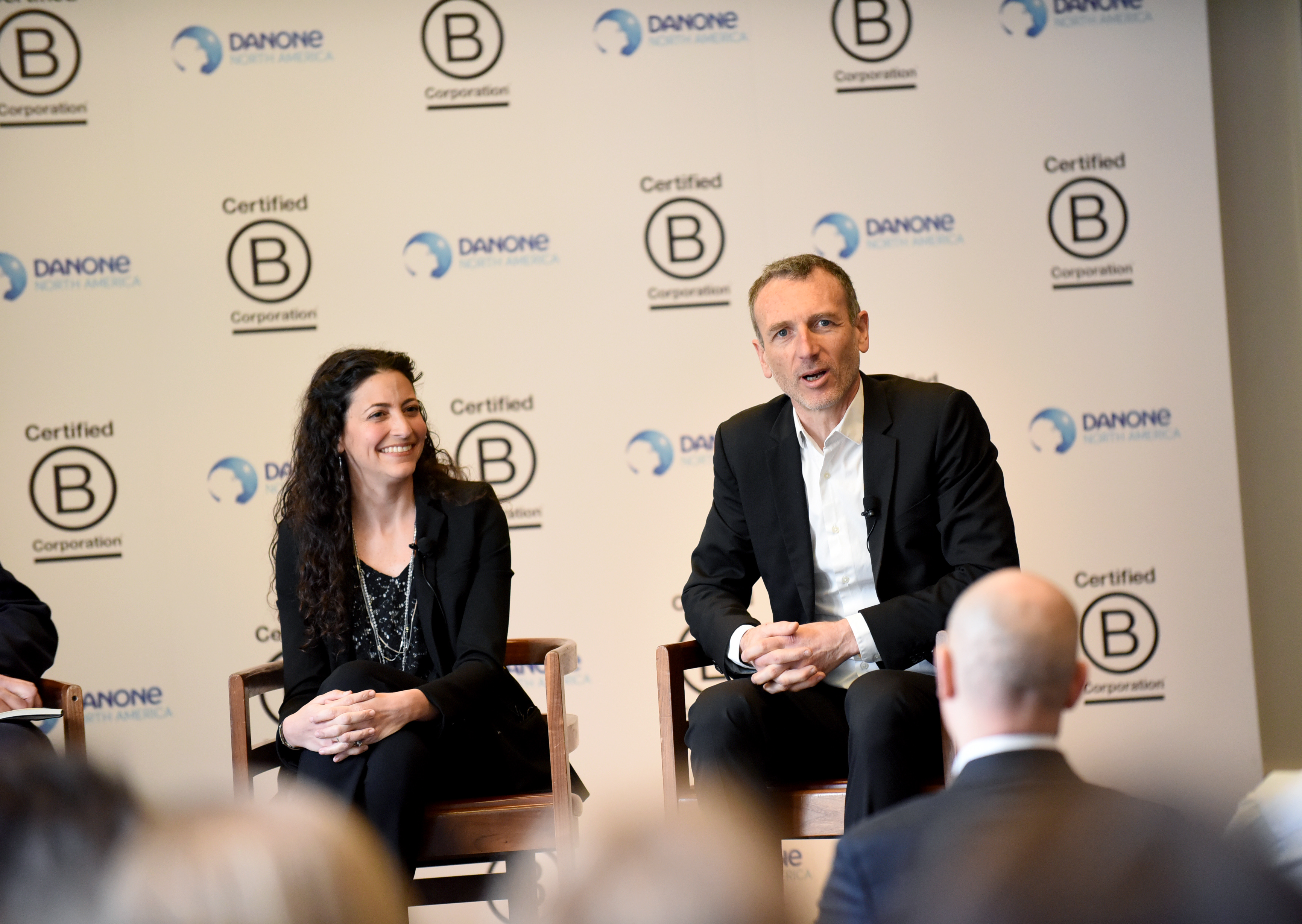 For example, the assessment ultimately was instrumental in defining Danone’s supplier selection processes, inspired investments in a formal system for tracking employee volunteerism and shaped many of the company’s "robust" benefits policies such as paid parental leave for salaried employees of up to 26 weeks. It also changed how managers are incentivized. And that’s just a taste.

Danone N.A., which accounts for about 20 percent of its French-based parent’s revenue (about $5.6 billion in 2017, based on current exchange rates), was actually the eighth Danone subsidiary to earn the B Corp designation. The company is aspiring to a global certification for the entire company by 2030, and it has assigned a team at the global level to help track the data that each division will be required to submit, Bratter said.

Learn more about the "B economy" at GreenBiz 19.

The B Corp certification is conferred by non-profit B Lab. To earn the distinction, which must be renewed every three years, companies must earn a minimum score of 80 out of 200 possible points. That’s tougher than it seems, Bratter said. For the record, the company’s official score was 85.

The database of certified companies continues to grow every month; as of mid-January this year, the magic number was 2,655 and counting. There’s a fee for carrying the label; companies larger than $1 billion pay $50,000 per year, depending on their structure.

As you’ve doubtless heard, many B Corps are privately held and not incredibly large from a sales standpoint. That probably has a lot to do with one of the other legal requirements that is part of being a certified B Corp: companies must "consider the impact of their decisions on all their stakeholders," not just shareholders. The pledge must be formal, not implied. That is, the company must reflect that commitment in its articles of incorporation, reincorporate as a benefit corporation or make other "structural" changes to accommodate that mandate, according to the B Lab website.

Danone N.A. is officially a public benefit corporation, which is how it met that part of the assessment.

A fresh menu of policies and procedures

One of the more obvious areas in which being a B Corp has a meaty impact over the past nine months was in supplier selection, onboarding and training, according to Bratter.

Danone N.A.’s policy is to prioritize partners from the same regions in which it is based, to be thoughtful about the benefit of buying local and to seek women-owned and minority-owned sources whenever possible. What’s more, the company’s high-level sustainable business principles — such as water balancing, reducing carbon emissions and adopting renewable energy — are communicated in every contract.

A key priority for the company this year will be helping farmers understand the value of soil carbon sequestration and regenerative agricultural practices, and at least $6 million in funding for pilots and experimentation has been dedicated to the effort through 2023. "There is some hugely exciting research going on," Bratter said. "This is meaningful and impactful work."

It’s about the journey and not necessarily the certification. ... Even if you can’t obtain all the points, it will start opening doors.

The B Corp assessment also prompted Danone N.A. to formalize the community and environmental volunteering policies for its roughly 6,000-person workforce and to invest in a "robust tracking system that was auditable." The company’s policy matches gifts up to $150 per employee per year and supports eight hours of paid volunteering, as well as opportunities to complete community work with teams.

The certification also has had an impact on employee recruitment, training and (Bratter hopes) retention. For starters, it forced changes in where and how positions were posted, as a means of promoting diversity via a more inclusive pool of candidates. At least 300 managers are trained every year in the issues of "equality, sharing responsibilities and the leadership of tomorrow." By the end of 2019, every employee will be granted at least one share of stock in the company, along with participation in an "amplified, dividend-based incentive scheme."

Employees across the company are encouraged to use the B Corp principles when evaluating new strategies. One example of where that’s playing out in real time is within the transportation and logistics team, which used B impact considerations while evaluating intermodal technologies that will play a future role in distribution, Bratter said.

"They asked for advice on what the assessment looks for in order to design a strategy for potential solutions," she said.

Speaking of advice, more than 150 people across Danone N.A. contributed actively to the assessment process — which gives you a sense of the magnitude of how deeply the B Corp sensibility must be embedded within an organization.

In the spirit of considering all stakeholders, the company also formed an external advisory council to guide the process, led by Patagonia CEO Rose Marcario and including representation from the venture capital world, academia and B Lab. They were responsible for reviewing the company’s policies for nutrition and public health, environmental issues and inclusion and diversity (including gender equality). "This wasn’t a matter of the sustainability team sitting down internally and collecting data," Bratter said.

Relatively speaking, it didn’t take Danone much longer than many smaller companies to manage its way through the assessment. Aside from the information-gathering exercises, it might take time for teams to develop and formalize strategies that support the B Corp ethos or, at the very least, do a better job of documenting processes that are already in place so that they can be scaled across an organization more quickly.

That can be invaluable, regardless whether a company ultimately chooses to be B.

"It’s about the journey and not necessarily the certification," Bratter said. "Whether or not you are a sustainability-minded organization, even if you can’t obtain all the points, it will start opening doors."