Smart grid. Smart agriculture. Smart stadiums? The internet of things (IoT) is making virtually every process, every structure — everything — much smarter and faster.

Why would that be different in the sports world? Fact is, technology is allowing stadiums and arenas to measure their energy use, water use and waste in real time. This has made it possible for venue operators and team owners to be much more efficient, saving money and carbon emissions in the process. Lew Blaustein talked with David Doll, industry principal of facilities and energy management at OSIsoft, one of the leaders at the intersection of green sports and the IoT, about where this exciting world is going.

Editor's note: This interview has been edited for length and clarity.

Lew Blaustein: David, right off the bat, for the tech-Luddites among us, can you define internet of things? 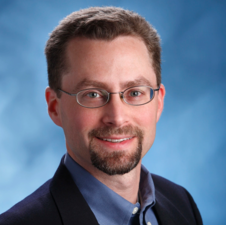 David Doll: There are a lot of definitions out there. I’ll go with this: It is putting a digital presence, a sensor where it didn’t exist before to feed data to other machines, to get them and humans to react.

Blaustein: I’m really glad to talk with you, as the topic of smart stadiums and arenas is something I’ve wanted to delve into for quite awhile. How did you get into this business? Are you from the tech side?

Doll: Yes. After doing my undergrad at University of Richmond and my MBA at Villanova. I worked for 16 years as a software developer, manager and IT consultant for software and consulting firms. Eventually, the company I was with was acquired by OSIsoft and I’ve been with them for the last eight years.

Blaustein: What does OSIsoft do, exactly?

Doll: We’re a privately held company that’s been around for more than 30 years. OSIsoft connects data with people in ways that allows them to turn that information into valuable insights. Our focus has been in heavy industry and the built environment worlds to help get value out of data, which was kind of an industrial-specific arena for decades. But with sensors getting smaller, more powerful and much cheaper, data and metrics have exploded everywhere.

Blaustein: That must mean it’s much more competitive.

Doll: Much more so. Smart grid, smart apartment buildings, smart airports, smart university campuses, smart data centers and smart stadiums are sexy these days. There’s data where there wasn’t before, from heating and air conditioning (HVAC) to occupancy. And so the big guys like Cisco and Oracle and Dell and you name it are involved. The competition has stepped up, but OSIsoft’s industrial heritage puts us in a strong position, as does our long experience in the environmental space, meaning using sensors to measure energy, water and carbon. For us, it’s a win-win intersection of "planet and profit."

Blaustein: Love that kind of "win-win." I have to believe a rapidly greening sports industry is adapting IoT and thus would be a market for OSIsoft. Is that the case and, if so, how big is sports in your overall portfolio?

Doll: Sports is a small portion of OSIsoft’s overall business, but it is growing and it is very high profile, which certainly helps us overall. I’ll give you a great case study with Major League Baseball and their Green Tracks program. This goes back to 2011 or 2012. We were introduced to Scott Jenkins, who at the time ran Safeco Field on behalf of the Seattle Mariners.

Blaustein: Now the general manager of the soon-to-open Mercedes-Benz Stadium in Atlanta, future home of the Falcons and Atlanta United F.C. Scott is also the chairman of the board of the Green Sports Alliance.

Doll: At that time, MLB had a program called Green Tracks, which asked stadium employees to manually enter their water, energy and gas usage as well as their recycling data.

Blaustein: Manually enter? That’s so a decade ago.

Doll: So true. And it had its struggles, so the data weren’t that accurate or detailed. We showed Scott and other folks at MLB our PI System.

Doll: It stands for something pretty simple: Plant Information. But the PI System is actually ubiquitous. In fact the PI System brand name is, in some cases, better known than OSIsoft. The PI System was installed at Safeco Field, and it immediately provided visibility and real time data for Mariners’ executives about the operations of the ballpark. Which is important when you consider that teams have much less knowledge about the business of their stadiums, about how their stadiums perform, than they do about how their players perform.

IoT is putting a digital presence, a sensor where it didn’t exist before to feed data to other machines, to get them and humans to react.

Now team management can see the energy footprint of the game, day vs. night, April vs. August, and then tweak things to improve it. And there were lots of ways the Mariners — or any other club, for that matter — could improve upon stadium energy, water and carbon footprint performance without messing with the game day experience of the players and fans.

Doll: First off, when the club is on the road, they can use the PI System to make sure things like the TV monitors and pizza ovens are turned off, that the AC is off except in occupied offices.

Blaustein: That seems like low hanging fruit. What about minimizing things during a game?

Doll: It’s a bit more subtle, but the same principle applies. When do you turn on the AC to get maximum effect and comfort but minimize waste? PI technology can show that. Same thing with lights, ovens and the rest. It enables them to constantly tweak performance. Energy usage in a place like Seattle should be a lot different at an April game versus one in the summer.

Blaustein: How much did the Mariners save?

Doll: They reported about $1.5 million over four years.

Blaustein: That’s significant for sure. How much did they save on a carbon footprint basis?

Doll: We don’t have that data, but if the energy savings are significant, so too must the carbon footprint savings. The Mariners were very happy, and so our next step was to sign an enterprise agreement in 2013 with MLB as part of Green Tracks 2.0, which gave the 29 other clubs the right to install the PI System at their facilities.

Blaustein: How did that work?

Doll: The league purchases the software, so the clubs can use the PI System for free. The only additional fees are for maintenance and consulting, if a club wants that. So far about a dozen teams are using it.

Blaustein: Such a deal for the clubs. Why wouldn’t all of them use PI technology if it’s free? Is it an exclusive deal or can clubs choose to use one of OSIsoft’s competitors?

Doll: Nope, clubs are free to use other products, but they’d have to pay to go that route. And one or two have done so. 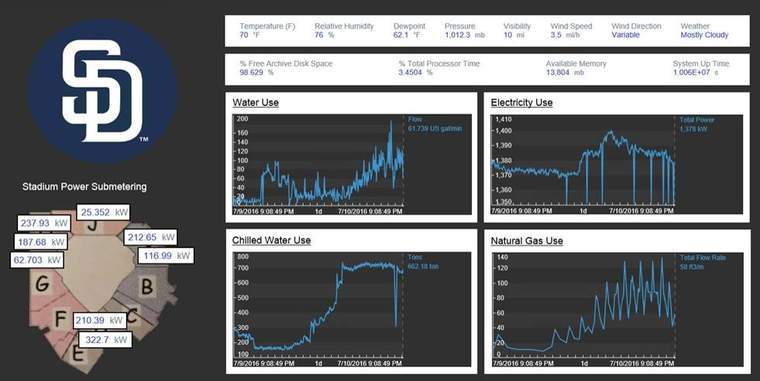 Blaustein: I imagine that the employees prefer PI to manually entering data.

Doll: No doubt about it — the employees love it. It allows them to be environmental and operational heroes by helping to solve problems before they happen.

Doll: We’re working with the Wild and Xcel Energy Center, which includes the hockey arena, an auditorium and a convention center. The PI System gives the owners visibility on energy, water and carbon across all of the facilities. As with baseball, the operators of the buildings didn’t know much about the energy they were using or why. Now that they know, they can negotiate better contracts for concerts and other events. A monster truck contest looks a lot different than a Lady Gaga concert; now they know. We also see a big opportunity with minor league and community rinks.

Blaustein: I’m sure you’re aware of the NHL’s Greener Rinks program, in which the league is becoming a sustainability resource for community rinks. Are you working with MLS, the NBA or NFL?

Doll: Not yet with those leagues nor their clubs. One big and perhaps surprising hurdle is the lack of technology in many stadiums and arenas, even the "modern" ones.

Blaustein: Really? I gotta believe that Mercedes-Benz Stadium or the new US Bank Stadium in Minneapolis (home of the Vikings) or Levi’s Stadium in Santa Clara (49ers) are super high tech.

There’s data where there wasn’t before, from heating and air conditioning to occupancy. And so the big guys like Cisco and Oracle and Dell and you name it are involved.

Doll: I assume you’re right on US Bank Stadium and I know you are on the other two. But think about newer ballparks like Camden Yards in Baltimore. It’s considered of the modern era, even though it is now 25 years old. There was not a lot of smart technology put into many of these buildings, and that’s where new IoT technologies become critical. And the sports world is changing. I don’t think it’s a stretch to envision that, within three to five years, OSIsoft will have brought our technology to the other leagues.

Blaustein: Oh, I would be shocked if it took that long. One last question: Does OSIsoft have any fan engagement programs? OSIsoft is, as far as I know, a B-to-B company, not business-to-consumer.

Doll: You’re right, we’re B-to-B. Environmentally focused fan awareness programs need to be the team’s responsibility, but we will keep innovating behind the scenes.