A lot of people claim credit for launching the green building movement. And while it took a village to create the U.S. Green Building Council, the LEED rating system and their counterparts around the world, David Gottfried is the real deal. The founder of both the U.S. Green Building Council and the World Green Building Council, Gottfried has helped to catalyze a multi-billion-dollar industry that's transformed how we think about the built environment. He's also a tireless entrepreneur, continuing his efforts to transform markets for green products and services through his membership-based Regen Network.

On the occasion of the publication of his latest book, "Explosion Green," I sat down with Gottfried to discuss how he views the movement he helped create and his wish list for what needs to happen next.

Joel Makower: You’ve written a couple of other books that were more or less autobiographical, "Greed to Green" and "Greening My Life." Why a third book?

David Gottfried: Well, we hit the 20th anniversary of the U.S. Green Building Council, which we celebrated at Greenbuild in Philadelphia in November, and I thought it was a big milestone.

The first book, "Greed to Green," told our 10-year story, but so much had happened the last 10 years, so I wanted to update that story as well as collect all the metrics I could get my hands on and then pull it all together. I wanted to show what allowed us to grow not just across the U.S., with 77 chapters but, by founding the World Green Building Council, to 100 countries. So part three of the book has got the ingredients for transformation as well as lessons learned.

Makower: What are some of the lessons learned that are relevant to marketing transformation outside the building industry?

Gottfried: We are, as you know, one of the best transformation nonprofits, and that model is being copied all over in many industries, from agriculture to office supply to food.

One of the lessons is to dream big. We actually ended up bigger than our dream, but we called it the U.S. Green Building, so we would go after the whole U.S. As it turned out, we’ve now licensed LEED to about 25 countries and LEED is being used in 140 countries. I believe we came up with a good model — open, nonprofit, transparent, all sectors of our industry at the table, so not just one voice or a one-instrument orchestra. And that can be done in any field.

I think another good part of the model was running a nonprofit as a business because, if nonprofits are broke, they’re out of business, and they can make a profit. They just don’t have shareholders to distribute it to. So we always ran it as a business.

Makower: Another Silicon Valley mantra is “fail fast.” Are there good examples where you tried something, failed and moved on quickly to something else? 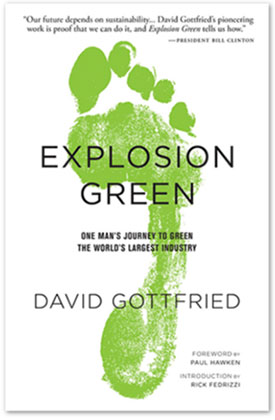 Gottfried: Lots of them. We used to do a lot more training for LEED and make a lot of money at it, but as we had thousands and then hundreds of thousands of LEED accredited professionals and 77 chapters, they all started to pick us off and do their own training. So we got out of LEED training. It became better to partner with them and then create Green Building University.

LEED itself has gone through a lot iterations — not just the guidelines but how to certify and try to streamline it.

We looked at whether we should get into green product certification, and we stayed away from that because of the risk.

We had an environmental organization — Audubon — and they wanted us to take on pollution taxes. This is like 1994, and Mike Italiano [a USGBC founder] was pretty interested in that. We didn’t want to touch it, so he quit the board that day and quit the council.

So we had these tensions where we’re not left enough and we’re not right enough, and we had parties on both sides quit.

Makower: There’s that old expression that success has 1,000 fathers and failure is an orphan, and there’s lots of organizations and associations that have created the LEED for something, fill in the blank. Do you ever look at those and say, “That’s a total misappropriation or inappropriate use of what LEED stands for?”

Gottfried: There are lots of organizations that invoke LEED as a reference but which lack the certification element. Some of them lack being a nonprofit, and they’re privately owned for personal gain. Some of them don’t have rigorous guidelines that are linked to third party standards. Others don’t have balloting that follow ANSI procedures.

Even in buildings. I went to Spain to negotiate the use of LEED for the Spain Green Building Council, and the guys who had started a council wanted to set up LEED in a private business, give me 20 percent of the business and then require the nonprofit have to use their business. I went home.

In Japan, there was a guy who personally trademarked the term “green building,” and if you wanted to use it in Japan, you had to pay him. So that didn’t work.

Makower: When you step back and look at LEED, is it everything you wanted it to be? Is it more? Are there still some wish list items you haven’t been able to check off?

Gottfried: I’ve always been really pleased with LEED and the standard and the guideline, and but I’ve always personally struggled with the certification process. I believe we could streamline it even more. And there’s the cost of certification. I also want to streamline that.

I thought it was great for 20 years that the “L” in LEED stands for “leadership.” We always said, “We want the top 25 percent to constitute leadership.”

But what about those other 75 percent? In new construction, we’re certifying 10 or 15 percent, depending on the size of the building, but we’ve missed all the existing buildings. We do have LEED EB, but in total, we have certified maybe 300,000 LEED buildings. But in the U.S., there’s almost 5 million commercial buildings, so there’s 4.7 million buildings we’re not playing with.

What about what I call the clunker buildings? Typically, they’re like 15,000 square feet. They’re 40 years old. They’re single pane glass, no insulation. The owner is 75 or 80, and the kids are waiting for that person to die and maybe they’re going to sell it to somebody else. And so those buildings aren’t in the green building game.

I want to move towards the Weight Watcher model, where they welcome you when you're 500 pounds and you walk in because you’ve got more to lose. They don’t say, “Well, you can’t run the triathlon, so you can’t come to Weight Watchers.” LEED is still a bit of a triathlon. We need to be getting to the couch potatoes and tell them, “Put on a pair of tennis shoes and just start walking. Go out the front door and walk. Walk a few blocks.”

Health, there’s another huge area we’re just getting at now, but our relationship to people is only through indoor environmental quality. And social justice, we don’t touch.

Makower: When you write your 25th anniversary book, what’s the new chapter you plan to add?

Gottfried: I’m really obsessed with who’s inside the green building and are they toxic themself. And when you think of health and productivity of occupants, we’re not looking at what they eat, what they think, are they stressed, what’s the quality of their relationships, how do they spend their time, what do they make and do, does that have social merit.

So I want to move more in that direction. My latest work, called Regen Brain, I’m studying neuroscience and plasticity because I believe we know the technologies and know how to do green, but we don’t do it. So they’ve got to change the economy and education. I’m working with a neuroscientist right now at Harvard on how to use his skills to bring it to sustainability and maybe we’ll have, in five years, a roadmap for a green brain.

Makower: LEED for Brains. I can see it now.