Davos 2013: The building blocks for a sustainable future?

<p>At the World Economic Forum, talk centers around how to build economies that can grow without bubbles and without gobbling up irreplaceable resources. What hopeful signs are there?&nbsp;</p>

The World Economic Forum’s 2013 meeting in Davos kicked off this week amidst ongoing stagnation in the world’s economy. This will be the fifth Davos since the global financial crisis took hold. And while 2013’s stagnation is far preferable to the fear and loathing that permeated Davos in 2009, the leaders who gather here this week continue to grasp for answers.

This year’s theme, Resilient Dynamism, speaks to a more balanced world: one that continues to innovate without creating bubbles and achieves widespread prosperity without consuming more natural resources than the planet has or can regenerate.

Each Davos is different, and it is impossible for one person to truly understand the entire event: After all, there are 2,500 official attendees and probably twice as many aides circling the perimeter.

Over the next several days in Davos, I will be looking to see signs of progress on the core elements of our "accelerating progress" framework in the 2012 BSR Report.

Government leaders who actually make sustainable growth a priority With the U.S., E.U., and Japan caught in a low-growth trap, and Brazil and India slowing, growth at any cost appears high on the agenda. In fact, there are some governments slightly off the main stage making green growth a priority, namely the South Koreans and the Danes, who are spearheading the Global Green Growth Initiative. It’s time for the biggest players, though, to get off the sidelines and revitalize their efforts to catalyze investments in green infrastructure, technology transfers and renewable energy.

Collaborations that can go to scale While Davos has the image of alpha males and females strutting their stuff, it is actually partnership central, with many interesting collaborations developed and showcased. I’ll be participating, for example, in efforts to advance WEF’s New Vision for Agriculture, which has powerful partnerships up and running in 10 countries to align nutrition, sustainability, and economic development at the farm level. This is but one example of the kinds of collaborations that are needed, with renewed collaboration needed most around climate, to jump-start policy discussions.

A vision for financial market reforms that enable long-term investing More than four years after the fall of Lehman Brothers, a new vision for finance still has not emerged. Market reforms that reduce the risk of bubbles and enable long-term thinking to take hold are as sorely needed as in the immediate wake of the financial crisis. I hope to hear more vision -- and more agreement -- on how market rules can be changed to align incentives with long-term, sustainable investments. 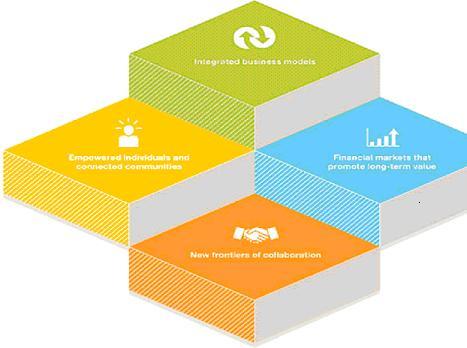 An understanding of how empowered individuals are part of the system represented in Davos Davos is in some ways the original social network, though certainly not on the scale of Facebook, Twitter, or LinkedIn. Interesting efforts have been made in the past couple of years to broaden the network, namely, including the establishment of a community of ‘Global Shapers:’ social entrepreneurs, activists, artists, and thinkers under the age of 30. For many, Davos appears to be a top-down event in an increasingly bottom-up world. The reality is more nuanced than that, but nonetheless, I’ll be interested to see how that intersection is represented in the dialogues and debates in the coming days.

At Davos, I will be participating in a public session on ‘Transforming Food Systems’ and a semi-public session exploring how human rights are being implemented by business. One of the best aspects of attending Davos is the serendipity of unexpected ideas and connections, and I’ll be looking for those in the days and nights ahead. And I’ll be tweeting and blogging along the way.

This article originally appeared in BSR Insights and is reprinted with permission.

Photo of Kongress house in Davos Switzerland provided by Fedor Selivanov via Shutterstock.