The 2020 meet-up in the Alps was heavy on climate, metrics and collaboration. Was all that jet fuel worth it?

It’s way too easy to take snarky potshots at the World Economic Forum Annual Summit in Davos, Switzerland, and just about everyone does: the environmental handwringing amid a swarm of private jets and chauffeur-driven SUVs; sumptuous feasts to discuss equity and sustainable food systems. ("Davos Attendees to Pollute 18,090 metric tons of CO2 for the ‘Sustainable World’ Themed Conference," bellowed one Norwegian website.)

You get the idea: There’s a lot of shade to be thrown. I could go there, but I’ll remain in the sunlight.

I’m just back from the 2020 summit — WEF’s 50th annual shindig, but my first. It was an intense, bewildering and sometimes challenging experience, but I’m quite glad I finally got to scratch that itch.

It’s hard to diss anything in such a beautiful mountain setting. Until WEF began meeting in Davos every January, the Alpine town was best known as a popular destination for the sick and ailing because its microclimate was deemed beneficial to those with lung disorders, notably tuberculosis. Today, even amid all the subsequent development and gridlocked limos, the stunning scenery is still a breath of fresh air.

WEF takes over the town for a week, almost literally. Much of the permanent population of about 11,000 people disappears. Global corporations take over storefronts along the Promenade, Davos’ main commercial thoroughfare, rebranding them with their logos and taglines. The town’s residents decamp and rent out their homes for sky-high sums. So do denizens of a wide swath of the countryside within an hour’s ride of the Davos Kongresszentrum, where the main event takes place.

I didn’t have credentials to attend the heavily fortressed main event. (Badges were even more scarce than usual: Several Davos veterans I know were denied access this year for the first time in a decade or more.) But I attended or spoke at nearly a score of side events and gatherings that took place last week, and compared notes with several of those who did manage coveted access to the Congress Centre and surrounding security zone.

Sustainability and the climate crisis were principal themes at this year’s WEF, which was, indeed, dubbed the "Green Davos." Climate change led the list of topics, and the WEF organizers said this year's event would be fully carbon neutral. The group also lined up electric vehicles and offered local food and non-meat protein options to attendees. Several events I attended served up vegan-only menus. Symbolic gestures, to be sure.

But it wasn’t just symbolism. The official theme of this year’s summit was "Stakeholders for a Cohesive and Sustainable World," referring to the consideration of a broad set of parties, not just shareholders, into business decisions. Along the Davos Promenade, pop-up pavilions focused on climate change and the Sustainable Development Goals (along with artificial intelligence, another top issue). "Stakeholder capitalism" was a recurring meme.

Davos Week also saw a steady stream of reports, announcements and commitments. January, it seems has joined April (Earth Day) and September (Climate Week and the United Nations General Assembly) as a focusing and forcing function for companies, NGOs and governments to make a splash in the world of sustainability.

While the sessions both inside and outside the Congress Centre covered a broad range of issues, sustainability and otherwise, there was particular heat at both the official and unofficial events around a handful of topics: sustainable food systems; nature-based solutions; sustainable fashion; the circular economy; and ESG investing. Much of it was framed in the context of "climate risk," a term that rather suddenly seems to be on everyone’s lips. 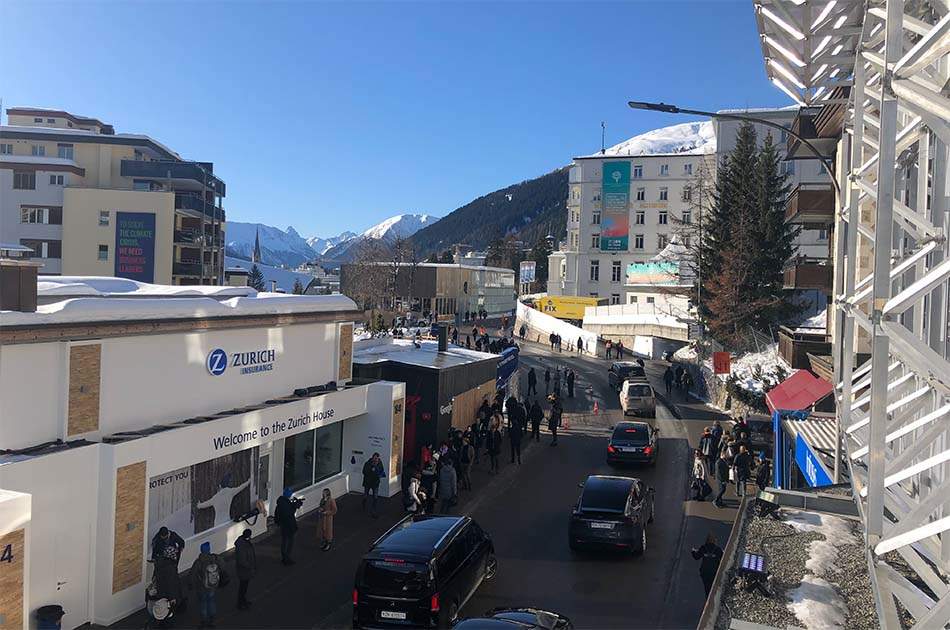 The stage had been set the week before with the release by WEF of its 2020 Global Risks Report. It presents the results of the latest Global Risks Perception Survey, in which nearly 1,000 decision-makers from the public sector, private sector, academia and civil society assess the risks facing the world. WEF defines a "global risk" as one that could cause major harm to several countries or industries within the next 10 years.

For the first time in the report’s 15-year history, the top five risks were all environmental — "the continuation of a trend we’ve been seeing over the past four or five years," as Robert Baily, director, climate resilience at Marsh & McLennan, one of the report’s co-authors, told me in an interview for last week’s 350 podcast.

"It’s really an extension of the fact that the world is moving from a growing awareness and discomfort with climate change and biodiversity, to something of an emergency footing," he said.

With that as context, the Davos conversation got down to business, literally.

A higher bar for metrics

Creating the tools for measuring sustainability’s many challenges and facets was a cross-cutting focus. Notably, WEF’s International Business Council discussed a collaboration with the Big Four accounting firms — Deloitte, EY, KPMG and PwC — "Toward Common Metrics and Consistent Reporting of Sustainable Value Creation." The goal is to create a set of consistent metrics and recommended disclosures to be used in annual reports of companies across industry sectors and countries.

Announcing the initiative, WEF said 140 of the world’s largest companies support the effort to develop a core set of common metrics and disclosures on nonfinancial factors for their investors and other stakeholders. The proposed metrics and recommended disclosures are organized into four buckets that align with the SDGs and principal ESG domains:

It remains to be seen how all of this will align with the alphabet soup of investment-minded NGOs such as SASB, GRI, TCFD and CDP, not to mention the ratings methodologies used by S&P Global, MSCI and Sustainalytics to assess companies’ ESG performance. The Big Four (along with Bank of America, whose chairman and CEO, Brian Moynihan, headlined the launch of the initiative in Davos) claim they will be pulling from existing frameworks and standards in creating their assessment methodology.

Will it be the breakthrough harmonization of standards that nearly everyone has been seeking, or a kludgy mash-up that satisfies no one? It is definitely worth watching. For the moment, it seems things could get more muddled before there’s clarity on how and what companies should be reporting to investors and the public.

In the circular economy realm, the World Business Council for Sustainable Development launched the Circular Transition Indicators (CTI) framework and an accompanying free online tool. Jointly developed with 26 WBCSD member companies, representing 13 industries across 13 countries, the CTI framework enables companies to "take ownership of their circular transition and perform their self-assessment based on their own scope and priorities, in full confidentiality and without sharing data with third parties," said the council.

The SDGs also got plenty of airtime in Davos last week. There was an SDG Tent, where dozens of events took place at all hours of the day and night. Outside the tent, the SDGs were a recurring topic: how to turn them into action, and fast, and how to measure progress.

One in-depth proposal was led by the World Benchmarking Alliance, whose work centers around incentivizing and accelerating companies’ efforts towards achieving the 17 SDG goals. The "Sustainable Development Goals Disclosure Recommendations" (PDF) paper, drawn up in partnership with global accounting bodies, proposes how corporates should improve SDG disclosure to drive more thorough assessment and action in support of the goals.

Among the recommendations: Companies should shift away from reporting on how they are taking action to advance certain goals and towards disclosing how all business activities — including investment activity — impacts progress on the SDGs. That is, to go beyond sweeping and positive declarations to more specific data on how the company is, and isn’t, making progress in addressing the SDGs.

The WBA walked its talk, moving beyond spouting general principles to identifying the 2,000 most influential companies in the SDGs, from Algeria to Vietnam. "These are the companies that are going to shape our future,” the organization declared. "In the coming years through benchmarking, WBA’s benchmarks can promote a ‘race to the top’ in which leaders are motivated to do more and laggards are held to account. This information will be free and available for everyone."

Several other tools and platforms were launched at Davos to support more and better measurements of progress. S&P Global introduced The Big Picture on Climate Risk, an "interactive data wall" that examined how climate change poses important transition and physical risks for companies and investors through regulation, changing market dynamics and technology, among other factors. 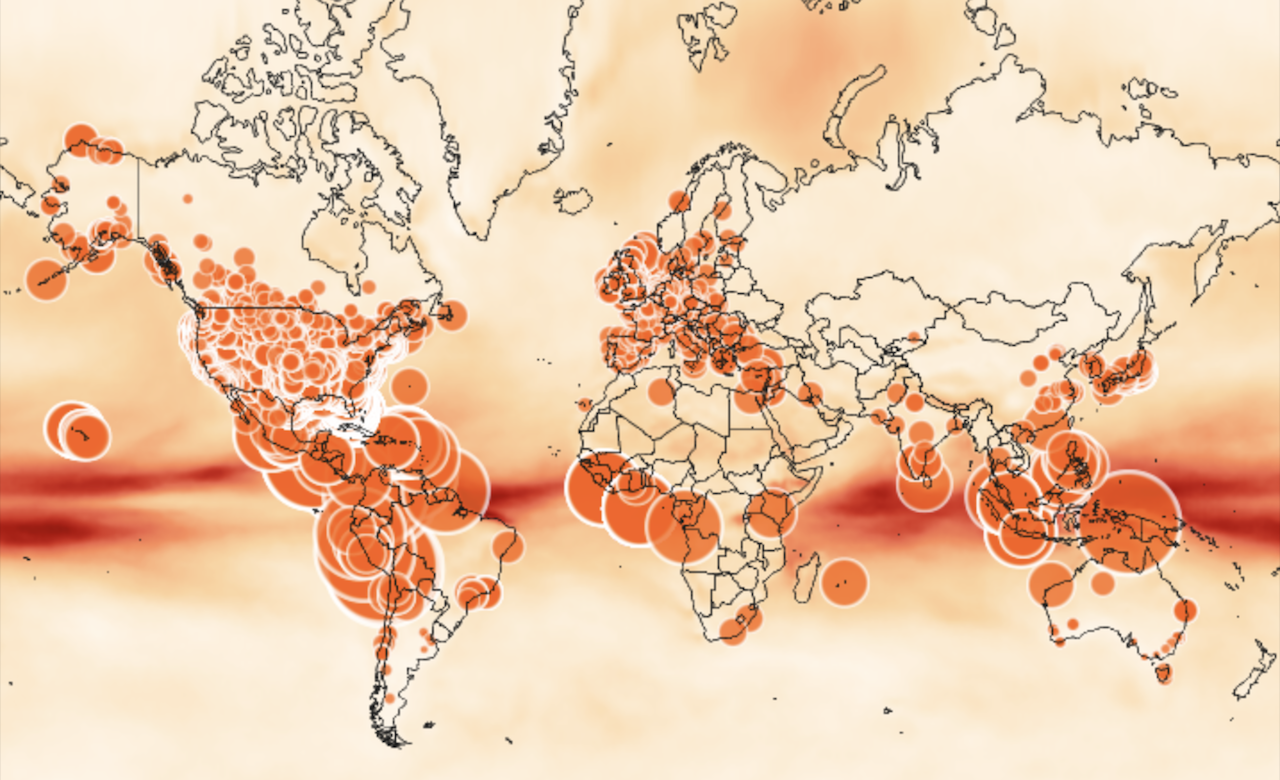 "Our data shows that heatwaves, wildfires, water stress, and hurricanes linked to rising average global temperatures represent the biggest physical risks for companies in the S&P 500,” said Richard Mattison, CEO of S&P’s Trucost unit. "Furthermore, the location of assets is the key factor in determining the extent of these risks, outweighing the industry or sector in which a company operates."

Meanwhile, a book-length report (PDF) published last week by the Bank for International Settlements in Basel, Switzerland, warned that climate-related risks could "threaten central banks' mandates of price and financial stability, but also our socio-economic systems at large." Climate change, it said, could lead to "green swan" events and be the cause of the next systemic financial crisis. Green swans — or "climate black swans" — are events, including physical and transition risks characterized by deep uncertainty and nonlinearity, that cannot be predicted from past data.

The notion that climate change could crash the global economy was not exactly top of mind for the Davos elite who, climate concerns notwithstanding, seemed pretty smug amid the booming global economy. And, to be sure, there were lots of other topics for these VIPs to explore, from digital currencies to LGBT inclusion to the future of work.

And notice that I haven’t even mentioned two of the more outsized personalities appearing in Davos last week, Greta Thunberg and Donald Trump. A story for another day. Political theater, galore.

Which may beg the question: Is it even necessary to travel all those distances to such a pristine setting to get these issues front and center on the global agenda?

It’s an open question, to which I have no astute answer. As we at GreenBiz have learned, when you attract influential people and create the conditions for them to share, learn and collaborate, there can be widespread benefits — and, with luck, the environmental impact will pencil out. For all the jet fuel and other emissions, there’s value — for both individuals and the world — in coming together to advance progress in sustainability.

Hypocritical? You decide. It just may be something we have to live with.