Is This the Death Knell for U.S. Climate Efforts?

The recording was obtained and aired by Al Jazeera; in the article, bin Laden is quoted as saying: "'all the industrial states' are to blame for climate change, 'yet the majority of those states have signed the Kyoto Protocol and agreed to curb the emission of harmful gases.'"

This is a worrisome development: Now that the World's Most Hated Man has aligned himself against climate change, is it going to be political suicide in the U.S. to try and pass climate legislation? In short, will passing a climate bill be hailed as caving in to terrorist demands? 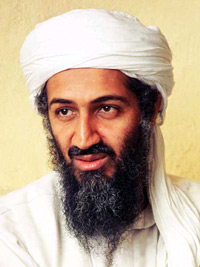 Bin Laden's statement continues to say: "However, George Bush junior, preceded by [the US] congress, dismissed the agreement to placate giant corporations. And they are themselves standing behind speculation, monopoly and soaring living costs."

I suppose that's some relief, since it appears that bin Laden is actually (still) criticizing George W. Bush, who he may or may not believe is still the president, in which case he probably also hasn't heard about the Copenhagen debacle, in which case expect an update sometime soon -- or following another 18 month delay.

In related news, we expect sales of Noam Chomsky's books to take a hit as well; in the recording, bin Laden calls for a boycott of U.S. currency, citing the linguist and political theorist's work: "Noam Chomsky was correct when he compared the US policies to those of the Mafia. They are the true terrorists and therefore we should refrain from dealing in the US dollar and should try to get rid of this currency as early as possible."