<p>Plastic bags are being banned or taxed in cities and counties across America. But I&rsquo;m not persuaded that plastic bag bans or taxes makes sense. Here&rsquo;s why.</p> <div> &nbsp;</div> <p>&nbsp;</p>

Plastic bags are being banned or taxed in cities and counties across America–just this week in Seattle, before that in San Francisco, Portland and Washington, D.C. Beginning in January, Montgomery County, MD, where I live, will impose a five-cent charge for carryout bags at all retail stores. Like most of my neighbors (median household income in the county tops $92,000) I can afford the extra nickel.

But I’m not persuaded that plastic bag bans or taxes makes sense. Here’s why.

They’re not based on science. Independent studies show that plastic bags are environmentally preferable to paper. Others suggest that, when they are reused, they are preferable to the reusable plastic or cloth sacks that many of us tote around.

Some of the arguments put forth for the bans don’t hold up. That plastic waste waste in the oceans you’ve probably read about? No, it’s not the size of Texas. Nor is it made of plastic bags.

Getting rid of carryout bags won’t lead to a long-term solution to the problem of plastic waste. Maybe instead of banning or taxing bags, we should be recycling them. That’s the argument being put forth by a company called Hilex Poly, which will recycle tens of millions of pounds of plastic bags, sacks and wraps this year, and would like to do more.

You may disagree but after digging into this subject for a while, I’m certain about only one thing: It’s complicated.

The arguments for plastic bag bans or taxes are, by now, familiar. The Montgomery County carryout bag law “is designed to improve our environment by cutting down plastic bags—a significant source of litter—which pollute our streets, streams, and playgrounds, and harm property values.” Econ 101 tells you that charging 5 cents for plastic bags creates an incentive for people to use fewer of them, and carry reusable bags instead. Proceeds go to “programs that fight litter and provide stormwater pollution control.”

Bill Hickman, who leads the Rise Above Plastics campaign at the Surfrider Foundation, an advocacy group, told me by phone: “We’re trying to stop the plastic impact on the marine environment. Plastic doesn’t biodegrade in our lifetime…Anything, single use, at the end of the day has negative effects on our environment.”

Studies say that plastic bags have a lighter environmental footprint than paper, and in some cases are preferable to reusable bags. A thorough life cycle analysis done in the UK by the government’s environment agency in 2006 (download PDF here) found that HDPE (high-density polyethylene, the typical lightweight plastic bags) are superior to paper because they require less energy and far less water to make and take up less space in landfill. Comparing them to reusable non woven polypropylene (PP) bags–the typical reusable bag, made in China, and sold by grocers–the study found that their impacts depend upon the number of times that plastic bags are reused. Data on this is scarce and controversial–critics of plastic say the bags are typically used just once, but the industry says they are frequently used, often as garbage bags, or to carry kids’ lunches to school, or pick up dog poop. (Banning plastic carryout bags means that people may have to buy bags for those purposes.) Focusing on the climate issue, the 120-page-long UK study says:

The paper, LDPE, non-woven PP and cotton bags should be reused at least 3, 4, 11 and 131 times respectively to ensure that they have lower global warming potential than conventional HDPE carrier bags that are not reused.

If I understand that correctly, it means that one reusable bag has the carbon footprint of 13 disposable bags that are used just once. If you use the disposable bag twice, you’ll need to deploy the reusable bag 26 times before you are ahead in terms of global warming. By the way, this doesn’t include the impact of washing the reusable bag in hot water, which is highly recommended because bacteria like E. coli and fecal coliform can thrive in reusable bags, according to this study, which, it must be said, was financed by the plastics industry.

A study from the University of California, Chico, funded by Keep California Beautiful, analyzed the U.K. studies, as well as research from Scotland, Australia and a U.S. consulting firm and found that “reusable plastic bags can have lower environmental impacts than single-use polyethylene plastic grocery bags.” But it also found traces of cadmium and lead in the reusable bags. The professor who did the study has consulted for both plastic bag and reusable bag makers. Like I said, it’s complicated.

Plastic pollution of the oceans probably isn’t as bad as you think. You can find dire stories of plastic pollution, as well as birds being strangled by plastic bags, on the websites of Surfrider and Save the Bay. Oprah Winfrey devoted a television program to the problem, saying:

The Great Pacific Garbage Patch stretches from the coast of California to Japan, and it’s estimated to be twice the size of Texas. “This is the most shocking thing I have seen,” Oprah says.

Whether Oprah has actually seen the garbage patch is anyone’s guess. But Angelicque “Angel” White, an assistant professor of oceanography at Oregon State, participated in one of the few expeditions solely aimed at understanding the abundance of plastic debris in the Pacific. He says the claim that the “Great Garbage Patch” between California and Japan is twice the size of Texas is flat wrong. OSU reports:

“There is no doubt that the amount of plastic in the world’s oceans is troubling, but this kind of exaggeration undermines the credibility of scientists,” White said. “We have data that allow us to make reasonable estimates; we don’t need the hyperbole.

According to NOAA and others, plastic debris in the oceans comes from many sources, including fishing lines, PET bottles, polyester clothing, detergent bottles, plumbing pipes, drinking straws and toothbrushes. The photo below comes from the website of a group called Heal the Bay, which crusades against plastic bags. Do you see a lot of plastic bags in the picture? Should we tax or ban all plastics because some end up as litter? 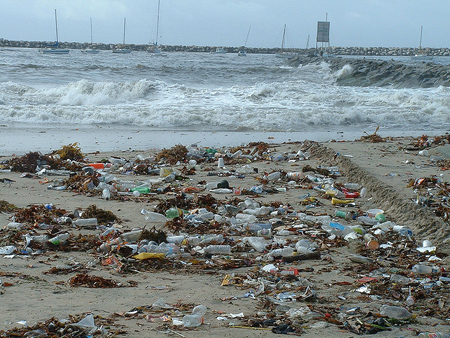 Why not recycle? Since we’re never going to ban all plastic bags and containers–plastics used to carry fruits and vegetables, plastic newspaper wrappers, styrofoam containers used for carryout food, etc–maybe the answer is to support and develop robust recycling streams for plastic. Like PET bottles, plastic bags are 100% recyclable. The plastic isn’t the problem; litter is the problem.

Unfortunately, recycling rates are low, but the good news is that they are climbing. EPA recently reported (PDF, download) that in 2010 recycling was up from 12% to 15% for polyethylene bags, sacks and wraps. The more plastic bags are recycled and reused, the less their environmental impact, of course.

This argument was put to me by Mark Daniels, who is vice president of sustainability for Hilex, a leading manufacturer and recycler of plastic bags. Hilex pays about $300 to $400 a ton to supermarkets and others for used plastic bags, stretch wrap, the plastic wrap that goes around bottles, etc. They company says it will recycled between 35 and 38 millions pounds of post-consumer plastic bags this year–a tiny fraction of all bags, but still–and it wishes it had more. Hilex does its recycling at a plant in Indiana that it opened in 2005, and doubled in size in 2010.

“It is less expensive for us to collect, purchase, transport and reprocess and redistribute that materials to all of our other plants than it is to purchase virgin material,” Mark told me. That’s true even though plastic bags are made from natural gas, which is cheap right now.

Hilex does its recycling at a plant in Indiana that it opened in 2005, and doubled in size in 2010. But a robust supply of post-consumer plastic is needed to keep the plant busy. “We can triple our capacity to nearly 100 million pounds,” Mark said. “But it’s difficult for our company and our board of directors to commit those tens of millions of dollars,” without the support of cities, towns, retailers and environmentalists for more recycling. “We should be 100% aligned with environmentalists,” Mark said.

The truth is, we don’t really have a clear answer to the age-old question of “paper or plastic,” now amended to say “paper, plastic or reusable?” Too many variables are at play.

My own answer? I carry several reusable bags in the trunk of my (hybrid) car and bring them into the grocery store when I remember. When I don’t, I take plastic and bring it back to be recycled. I don’t feel bad about that. Neither should you.