A successor to the practice of old school “reduce, reuse, recycle” mantras, these examples of unconventional material re-purposing help illustrate the much-hyped circular economy — a more ambitious, and more marketing-friendly, rethinking of how product materials and packaging can be cycled back into supply chains.

On a fundamental level, the circular economy is “a model that decouples economic growth from resource constraints” by reducing reliance on virgin materials. Instead, the goal is to keep materials functioning at their highest utility at all time, preventing would-be waste from reaching landfills, said Ella Jasmin, research manager of the U.K.'s Ellen MacArthur Foundation.

While the idea of wringing more value out of materials for both economic and environmental reasons is by no means new, the circular economy craze among corporate social responsibility departments is fueled by more urgent recognition of commodity risks in supply chains, an increase in zero-waste regulations and a pursuit of the financial opportunities that come with more efficient reuse strategies.

“We’re at an important turning point in history with rising commodity prices, increasing populations and greater uncertainty with our interconnected global supply chains,” said Jamie Evans, a consultant at Accenture who created a Circular Economy Toolkit for businesses while pursuing a master's degree at the University of Cambridge. “Companies have been stung by material shortages, pushing material prices skyward and threatening continuity of operations and margins.”

Despite these macroeconomic pressures, concrete examples of the circular economy in action remain niche in the grand scheme of the global economy. Still, the dual allure of cutting material costs and shrinking waste streams has fueled financial projections of up to $1 trillion a year — if circular logic can go mainstream.

With this challenge in mind, it's well worth asking what makes the circular economy different from old school blue bins or take-back programs. And what about trendier endeavors, such as cradle-to-cradle design strategies focused on cutting waste out of product life cycles, or employing biomimicry to emulate minimal-waste biological processes?

According to Jasmin, the circular economy is an umbrella term that encompasses all of these approaches and more.

“The circular economy is a whole system approach,” she explained. “How it links to a number of models is by building on top.”

Perhaps it comes as little surprise, then, that analysts monitoring the growth of the circular economy say the model also lends itself to a deeper reconsideration of how and why products are designed and sold. In the case of the auto industry, for example, that could mean cutting back on manufacturing physical goods (private cars) and replacing that revenue with new types of transportation services.

“The circular economy is trying to clear up the big confusion we have around how to use products in the first place,” said Martin Stuchtey, director of McKinsey's sustainability and resource productivity division.

Like many lofty philosophies, it isn't always clear how the theory surrounding the circular economy can be translated into action.

One priority for Stuchtey and his team at McKinsey is getting beyond ideas that are “too generic to be useful or be monetized,” he said.

So the consultancy has set out to crystallize specific business models that incorporate the idea. They have identified six approaches that translate across industries — regenerate, share, optimize, loop, virtualize and exchange — along with examples of both startups and bigger companies jumping on the bandwagon. 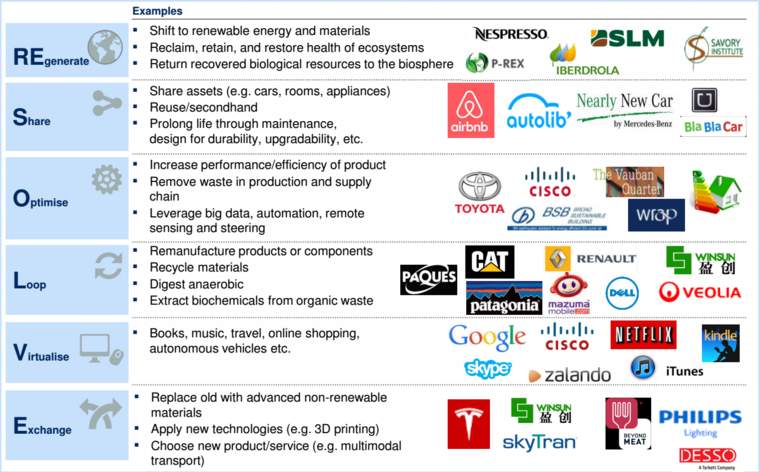 Aside from confusion among corporate executives about how exactly to harness the circular economy, a lack of clarity also persists among policymakers, said Carl Smith, president and CEO of the nonprofit Call2Recycle, which has helped companies such as Best Buy and Grainger establish product take-back programs.

“It appears, when you look particularly at the EU literature, that any kind of recycling constitutes a circular economy,” Smith said. “I don’t think there’s been enough rigor applied to what the circular economy means.”

Part of that confusion can be linked to semantics, as some have latched onto the related concept of “closed loop” systems also built upon the re-circulation of materials through the value chain.

“I view closed loop and circular economy as synonymous,” said Ron Gonen, director of the Closed Loop Fund, a $100 million effort financed by companies including Walmart, PepsiCo, Coca-Cola, Goldman Sachs and Unilever to build out recycling infrastructure and improve material reuse. “We want to make sure any consumer good can be recycled back into another product continually.”

And, far from an exclusively altruistic proposition, he said that the financial case for such a dramatic rethinking of material use is already clear.

“Part of business is constantly focused on efficiency — how do we make the same product better, in a less expensive way?” Gonen said. “That’s very much in line with the circular economy. If I can get material I can use from somebody who is just going to discard it, that’s probably much cheaper.”

That also means that the underlying idea can transfer across industries — no matter what you call it.

“This is a system where the economy grows and natural systems thrive. That’s the idea that’s driving us,” Stuchtey said. “You could also call it whatever — natural capitalism.”

In many ways, the future of the circular economy comes down to matchmaking. That is, how feasible it is for companies to match existing material waste streams with new applications, either in their own supply chains or within other companies' supply chains.

This recognition that businesses can act both independently and collaboratively to advance the circular economy has spurred a number of organizations to wade into the space as educators, conveners and funders.

The Closed Loop Fund, for instance, plans to release initial data on its public and private sector investments to date this fall. The group is also incubating two startups focused on textile waste, e-waste and commercial property.

In the meantime, groups including the U.S. Business Council for Sustainable Development are setting up online business-to-business material marketplaces for companies looking to buy and sell everything from cardboard and wood to brewery byproducts.

The Ellen MacArthur Foundation's Circular Economy 100 membership group also conducts its own research and compiles case studies with tangible examples from companies such as Apple, Cisco, Unilever, Renault and Ikea. The organization has documented a number of companies experimenting with pay-per-service models or strategies focused on improving repair processes and minimizing downtime, according to Jasmin.

“It’s a model that can largely be driven by business, because there is an economic opportunity,” she said.

Finally, stewardship programs already have been operating in the realm of waste management for years, such as Call2Recycle. For those organizations, many of them nonprofits, the circular economy is a more pronounced market opening.

And while familiar materials such as paper, glass and hundreds of variations of industry-specific plastics are daunting enough to find new homes for, organic materials and toxics are animals of their own. Take the nuanced process of recycling different types of batteries as one example: 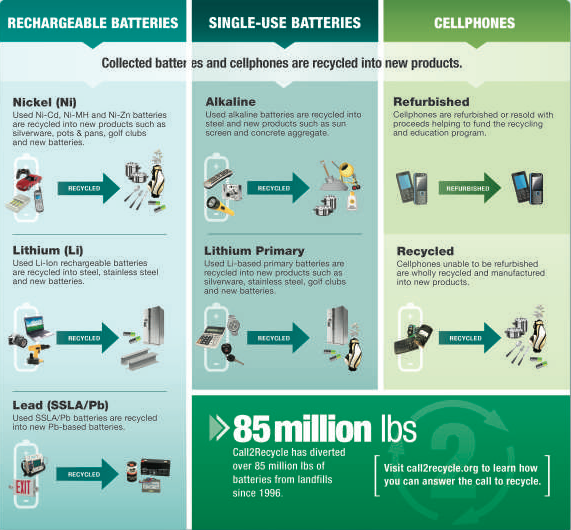 “Fundamentally what’s changed in the last five years … is you are coming up with different ways to manage waste, whether or not it is hazardous,” Smith said. “What I’m really seeking are processes that can take things diverted from the regular waste stream and cycle them back into a similar product.”

When it comes to encouraging signs, Smith points to entrenched industries, such as mining companies, that see growing financial openings in the realm of hard-to-handle waste streams.

“Most of the traditional battery recycling folks are mining companies that have decided, instead of digging deeper holes in the ground, to mine the stream of waste,” he said.

One potential sticking point, however, is a looming shortage of processors functioning as middle men that can sort and repurpose materials collected by take-back programs.

“The loop is closed by the processor,” Smith said. “We don’t want to get involved in the decision about where it goes.”

In the broader economic landscape, Stuchtey of McKinsey sees a divide between slow-to-adopt corporations and companies already seeking to maximize the business opportunities embedded in the circular economy.

Best Buy, Grainger and the secrets to take-back success

Reinventing plastic for the circular economy

What the circular economy means for battery recycling

Q&A: Is your company getting it right on recycling?