Deforestation: When should I panic?

There is plenty to panic about working in sustainability, and nothing is more fear-inducing than seeing cleared land where there once were trees. We know that forest loss comes hand-in-hand with the production of consumer products. We also know consumer products bring countless benefits to society, and although we are making progress on more sustainable consumer goods, there is still a cost to that production.

Along with industrial water pollution, forced and child labor and greenhouse gas emissions from energy use, deforestation continues to be one of the biggest costs of producing consumer goods. In fact, it is even bigger than we thought.

The Sustainability Consortium, along with the World Resources Institute and the University of Maryland, recently published a paper in Science, one of the world’s top academic journals. "Classifying Drivers of Global Forest Loss" shows that a quarter of global forest loss is permanent, and that deforestation is not slowing down. Despite the efforts of the entire sustainability community, governments and conservation organizations, the overall rate of commodity-driven deforestation has not declined since 2001.

A sobering statistic to be sure, especially considering the focus this topic has had in recent years.

When we drill down into the data, we get a more nuanced picture, one that shows the changing locations where deforestation occurs.

When we drill down into the data, we get a more nuanced picture, one that shows the changing locations where deforestation occurs. While deforestation in Brazil has slowed, our research showed an uptick in Southeast Asia. We also found that 27 percent of all deforestation was due to the large-scale production of food, including the production of soy, beef, palm oil and other crops. Unlike wildfire or the certified forestry industry, these forests never will grow back.

At the end of August, I hosted a meeting of the TSC Idea Forum on an island in the Pacific Northwest. We brought together many companies, NGOs and sustainability experts from across the retail, food and consumer goods industries. When we flew in, instead of lush greenery and the blue waters of Puget Sound, we were met with gray smoke from the wildfires burning nearby. 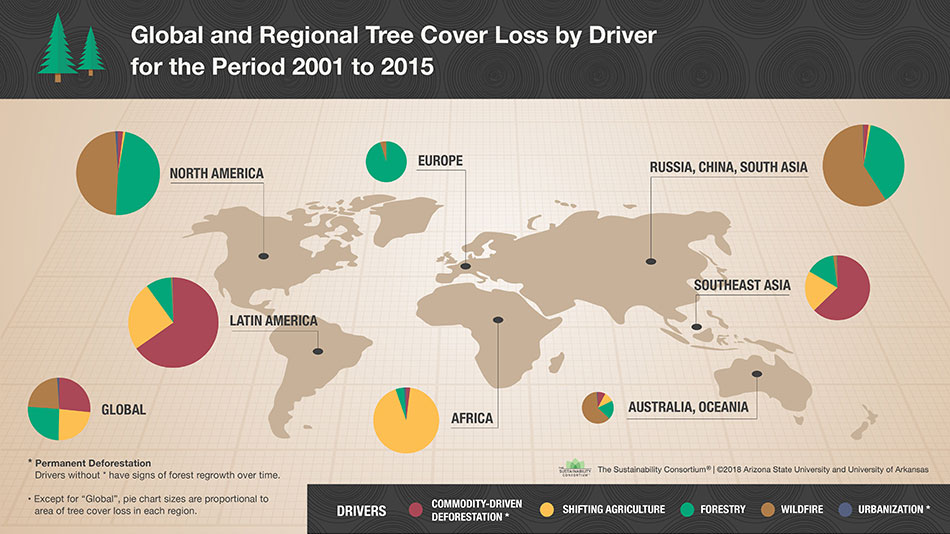 Although wildfires make up 23 percent of forest loss globally and are predicted to become more intense because of climate change, they can be a natural part of forest growth. But the smoke and poor air quality were pretty scary to witness, and a reminder of why we need to stop deforestation for food production, support sustainable forestry practices and reduce greenhouse gas emissions that increase climate-related wildfires: These issues can be associated with nearly every product supply chain.

Because of this new report, we can see that companies, governments and NGOs still have a lot of work to do, even to deliver their existing deforestation commitments. The good news is that all the data from the report is hosted in the Global Forest Watch tool, so it is easy to understand what’s going on and to set credible, meaningful targets to solve this issue once and for all. As always, The Sustainability Consortium is committed to both using and contributing to scientific knowledge to support better decision making for the future of our planet.

When sustainability needs a two-way conversation

Does sustainability lead to better companies?

Do sustainability professionals strategize in the woods?

See all by Euan Murray