Cree Inc. has become the preferred manufacturer of energy efficient LED lighting used in new and remodeled Denny's restaurants in the U.S., the lighting company and the dining chain said.

In the announcement, the lighting maker based in Durham, N.C., cited the experiences of two Denny's franchisees who between them have seven restaurants and use Cree LR6 6-inch downlights. 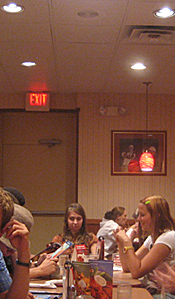 Typically, downlights are fixtures that sit in recessed openings in the ceiling, like in the picture to the right.

Peter LaBarre of Colorado Springs installed more than 400 Cree downlights in his five restaurants and is saving about $15,500 a year in energy costs, according to the lighting company. He also replaced 500 fluorescent bulbs and tubes with 200 Cree LR6 fixtures as perimeter lighting at the restaurants.

Illinois franchisee Joey Terrell's two restaurants include one in Joliet that's built to LEED-Gold standards and opened in 2009. The newer restaurant relies on natural lighting and Cree LEDs to illuminate the dining area. The lighting design helped cut utility costs by 83 percent and shave the electricity bill at the Joliet restaurant to about $1,000  month, according to Cree Inc. Without the lighting design, the restaurant could have faced a $2,100 monthly tab for electricity based on expenses at Terrell's other restaurant, which is Mokena, the company said.