In Denver, it took a village to build a microgrid

Fifteen contracts were involved in getting the grid-tied Pena Station off the ground.

The plan for Peña Station NEXT, a 400-acre "transit-oriented" smart city development on the train route connecting Denver to its international airport, emerged several years ago after a key division of technology champion Panasonic picked up and relocated its headquarters there.

Officially opened in April 2016 (well, at least a portion), the much-hyped project is, among other things, a showcase for the possibilities of microgrids that combine solar panels and energy storage. The ambitious blueprint includes smart LED street lights with video analytics features for safety and parking applications, community wireless services, electric vehicle charging stations and self-driving shuttles.

Given how many smart city prototypes are under way around the world, the idea behind Peña Station isn't extraordinarily unusual. But the business model behind this "living laboratory" is one that's worth careful consideration. It took 15 individual contracts to get the operation off the ground, said George Karayannis, vice president of CityNOW, Panasonic's North American smart city initiative, spearheaded by the company's Enterprise Solutions division.

"That is black-belt project management, and it could only happen when we had everyone committed," Karayannis added. 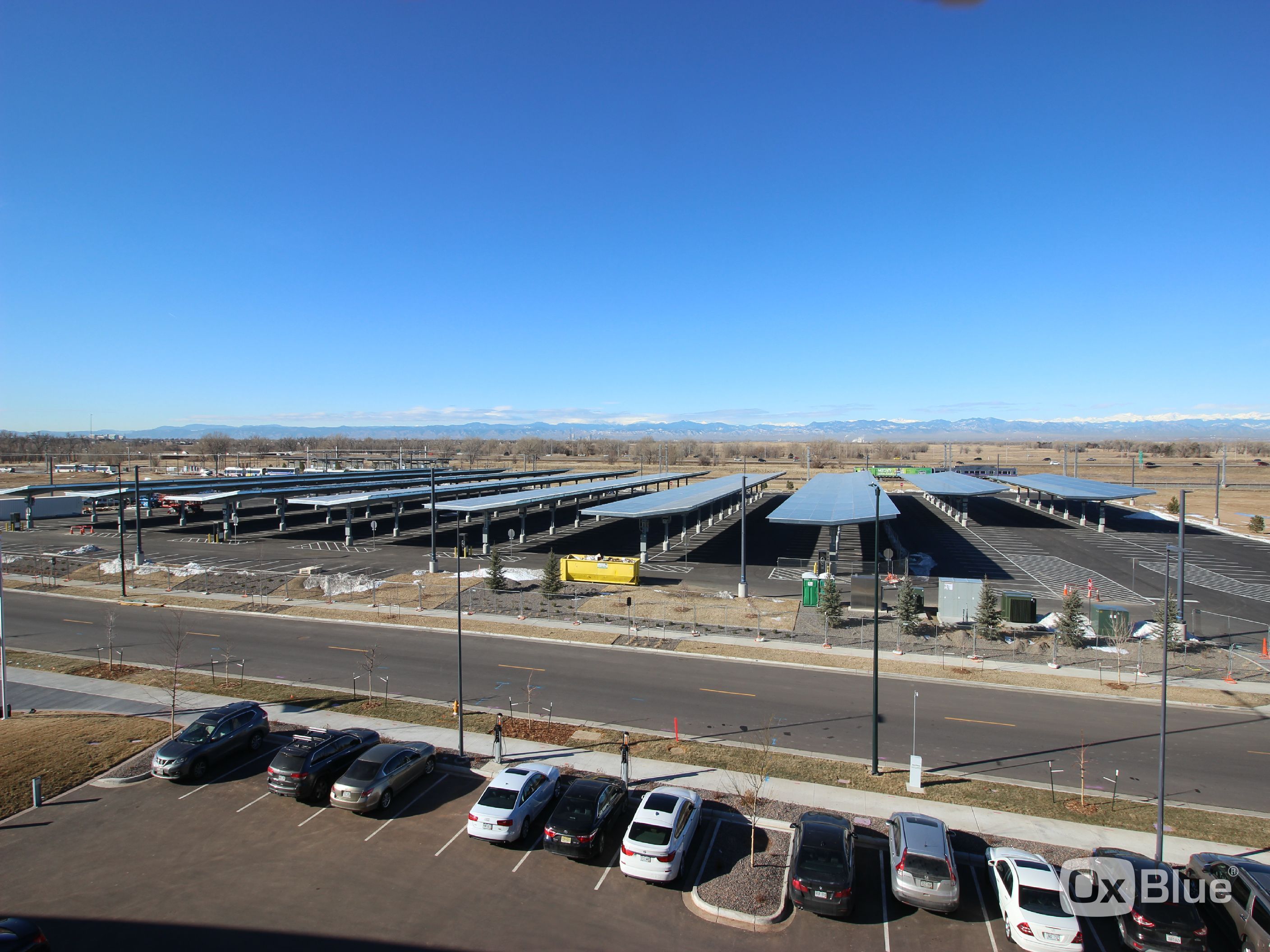 The five core project partners in the "portfolio" microgrid that is central to Peña Station included Panasonic, of course, which is investing in storage as a resiliency option for the operations hub it has created with the Peña Station development and is serving as project manager; investor-owned utility Xcel Energy, which owns the solar panels and the electricity they're generating; the Denver International Airport, which owns the land and the steel of the canopy holding the solar panels; energy storage technology vendor Younicos; and real-estate developer LC Fulenwider.

The shared assets include the 1.6-megawatt solar array on top of the airport's carport, 259 kilowatts of rooftop solar capacity on Panasonic's facility, and a 1-megawatt-capacity lithium-ion battery storage systems along with the intelligent software and control systems necessary to manage the technology.

"If all the stakeholders had not aligned, the deal would not be done," Karayannis said. Once the partners came together it took about 16 months for the public utility commission to approve the installation at "lightning" speed, he noted.

[Learn more about community microgrids and energy projects during several sessions at VERGE 17.]

Over the next two years, the partners will test a handful of applications that could be central to wider-spread adoption of microgrid technologies, including how well the installations performs as a facility backup power source for demanding businesses such as Panasonic and the impact on Xcel's distribution system.

"We have a regular cadence with all the stakeholders," Karayannis said.

Good for business and the community

That also includes the city and county of Denver, which views many technologies coming online at Peña Station as central to its 2020 goal of reducing energy consumed by city-operated buildings and vehicles at least 20 percent while doubling the clean energy produced by local facilities. An ulterior, yet related motive: the city's ability to attract corporate citizens such as Panasonic, which relocated there in large part because of Denver's long-term sustainability agency.

"What it shows is that companies are making decisions about business locations based on the sustainability track record of cities," said Jerry Tinianow, chief sustainability officer for the city and county of Denver. "But I think what won the day is the collaborative approach we take to everything here."

For example, the microgrid could become an alternate power backup resource for other businesses that relocate near the Panasonic facility — an alternative to the diesel generators often used today. The Alliance for Sustainable Colorado is one example of an organization pushing the envelope with emerging energy efficiency and power distribution approaches; its headquarters building was the state's first to earn LEED Platinum status (PDF).

Denver viewed the microgrid at the center of the Peña Station as an ideal opportunity to begin testing smart grid technologies in partnership with Xcel. "As a city, it's in our best interest that our investor-owned utility succeed," Tinianow said. "That it make the transition successfully and that it continues to be a strong player."

About 15 percent of the city's current electricity mix comes from renewable energy sources on an average basis, and there have been days when that contribution has been much higher.

Peña Station also will become central to the city and county of Denver's next-generation regional transportation system. The strategic plan (PDF) includes better connections between multiple modes of transit, including walking, biking and public rail, shuttle and train routes — including "true" driverless options with no steering wheel, gas pedals or brakes — with a view to limiting the region's roadway footprint.

"The mobility project has many different aspects to it, but one of them is the electrification of transportation," Tinianow said. "Even today, an electric vehicle is going to put out less pollution and less greenhouse gas emissions than a petroleum-fueled vehicle. … As the mix of energy generation becomes more renewable, it makes more and more sense for our vehicles to be electric."

Clearly, much of that future is still a vision. The key to making it a reality will be the model of close collaboration that is helping get the linchpin, a functioning microgrid, get off the ground. "What's holding back microgrids isn't technology, it's the business model," Karayannis said.