Clean-energy programs find themselves squarely in the cross hairs of the GOP this election season. After pillorying the White House over Solyndra’s collapse, the House has been griping about everything from military spending on renewables to Obama’s failure to lower gasoline prices. So it may not be the best of times to crow about green energy success.

Or maybe it is. After all, while the past year may be remembered for cleantech’s struggles, green-energy companies turned in another banner year in the humdrum businesses of generating renewable electric power and biofuels.

All together, solar PV, wind and biofuel markets expanded by 31 percent last year to $246 billion globally, according to Clean Edge’s 11th annual edition of Clean Energy Trends 2011, a wrapup of key green-energy indicators. The expansion caps a five-year run during which these markets have grown by roughly a third each year. 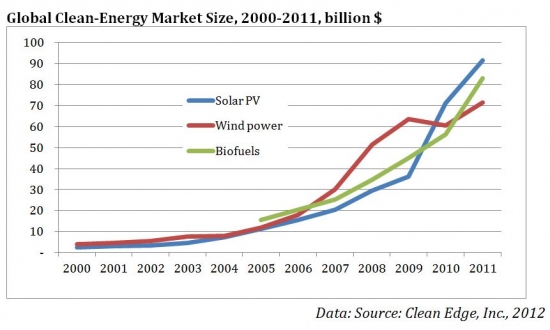 To be sure, the market issues facing solar PV manufacturers, wind turbine makers and biofuel producers are very different, so I want to be cautious about generalizing. But the three share similarities. All are gaining sales in established markets dominated by fossil fuels. All have matured beyond startup stages and are, accordingly, seeing the emergence of sophisticated, large-scale players.

And, of course, all three have faced souring public support in the past year. Solar subsidies retreated in Europe. And in the U.S., tax benefits were eliminated for corn ethanol, while the wind industry is once again fighting for the renewal of its production tax credits.

Last year, “the industry became a modern-day whipping boy,” Ron Pernick, Clean Edge co-founder and managing director, said in a press statement. “The attacks… overlooked the fact that many clean-energy technologies are becoming increasingly cost-competitive, central to the expansion of energy markets in places like China, Japan and Germany, and a critical hedge against more volatile forms of traditional energy.”

Despite these headwinds, Clean Edge expects the markets to grow steadily -- albeit more slowly -- in the decade to come. It projects the clean-energy market will expand by 4.6% per year (compounded) to $385 billion by 2021. In all three technologies, falling prices will spur further growth.

Solar photovoltaic: Sales of PV panels globally surged to $91.6 billion in 2011 from $71.2 billion in 2010. The surge is all the more remarkable because it comes amid fast falling unit prices for solar panels. Put another way, dollar sales rose by 29 percent, while the volume of watts installed soared by 69 percent to more than 26 gigawatts worldwide last year from 15.6 gigawatts in 2010. Clean Edge projects that the cost to install solar PV systems will fall from an average of $3.47 per watt globally last year to $1.28 per watt in the next decade. The falling price will make solar PV cheaper than the grid average price in about a dozen U.S. states in that period.

Wind power: The volume of new turbines coming on line also hit a record last year, with 41.6 GW of wind capacity installed. Assuming, as a rule of thumb, that windmills produce about a third of their rated capacity, that’s the equivalent of more than a dozen nuclear reactors. The total spent to build that new capacity hit a record: $71.5 billion, up 18 percent from $60.5 billion in 2010.

Biofuels markets also established a new high in 2011, with $83 billion in global sales, up from $56.4 billion the prior year. Unlike the markets for solar and wind technology -- where falling prices were the rule – per-gallon prices for ethanol and biodiesel rose through the year, reflecting the higher costs of feedstocks such as corn and plant oils, as well as higher fossil-fuel prices. 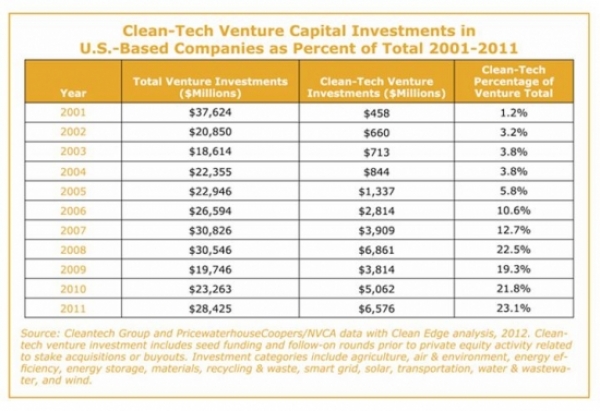 Just in time for GreenBiz’s VERGE meeting in Washington, Clean Edge’s report also focuses on several key trends highlighting the way that energy technologies, efficiency and infotech are converging to transform business and government practices. These include the potential for “deep” retrofits in commercial buildings; the growth of waste-to-resource business plays; the promise of energy storage on the grid; the U.S. military’s growing emphasis on clean technology and efficiency; and Japan moving into its post-nuclear future.

Check out the Clean Edge’s full report at http://cleanedge.com/reports/charts-and-tables-from-clean-energy-trends-2012 (click on "Download full report" on the left).