For companies in the business of getting things from Point A to Point B, fleet initiatives aimed at cutting fuel consumption rank among the most effective ways to reduce carbon dioxide emissions.

Just ask one poster child for this — PepsiCo, which owns one of the largest private fleets in the country at about 35,000 vehicles. Since 2010, it has reduced the amount of gasoline it uses by 24 percent, by switching to alternative fuels and technologies.

Delivery and logistics company Deutsche Post DHL Group also has made investments in alternative technologies a huge rallying cry. It has about 11,200 vehicles on the road running on electric, hybrid and other fuel options. That’s about 12 percent of the overall total, and DHL’s senior sustainability executive is pushing for more. “We have the opportunity to renew this constantly,” said Christof Ehrhart, DHL’s executive vice president of corporate responsibility.

That includes an aggressive expansion into electrified “delivery cars” in Bonn, Germany. Designed for short-distance traffic of about 50 miles, the exterior resembles a small Ford Transit parcel van.

DHL's experiment there began two years ago. There are now 100 of these vehicles, with 50 more planned by the end of 2016. In fact, DHL has been so pleased that it bought the supplier, StreetScooter, in December.

That move will enable DHL to further influence the design, for greater efficiency without risking reliability. The company eventually will use these vehicles to updates its fleet in inner cities. “This doesn’t have to be a Tesla; it just has to work,” Ehrhart said.

In New York City, DHL is using both electric and hybrid vehicles. Its main concern, so far, has been slightly shorter battery lives during extremely hot weather. One reason for that might be the need for drivers to run air-conditioning. Elsewhere, DHL is using liquid propane and “clean” diesel.

DHL’s goal is to cut its carbon footprint by 30 percent by 2020, compared with 2007 levels. So far, it has managed a reduction of 23 percent “in line with expected progress,” Ehrhart said.

From Clydesdales to natural gas

The American division of Anheuser-Busch is also retrofitting its beer delivery trucks to meet the company’s global goal to cut “logistics-related” carbon emissions by 15 percent through 2017.

Its latest move came in late August, when the company began replacing close to 100 diesel-powered tractor trailers in St. Louis with alternatives that run on compressed natural gas (CNG). These particular trucks probably will handle deliveries for about 31 million cases of beer this fall. They’ll produce about 23 percent less greenhouse gas emissions than their predecessors. 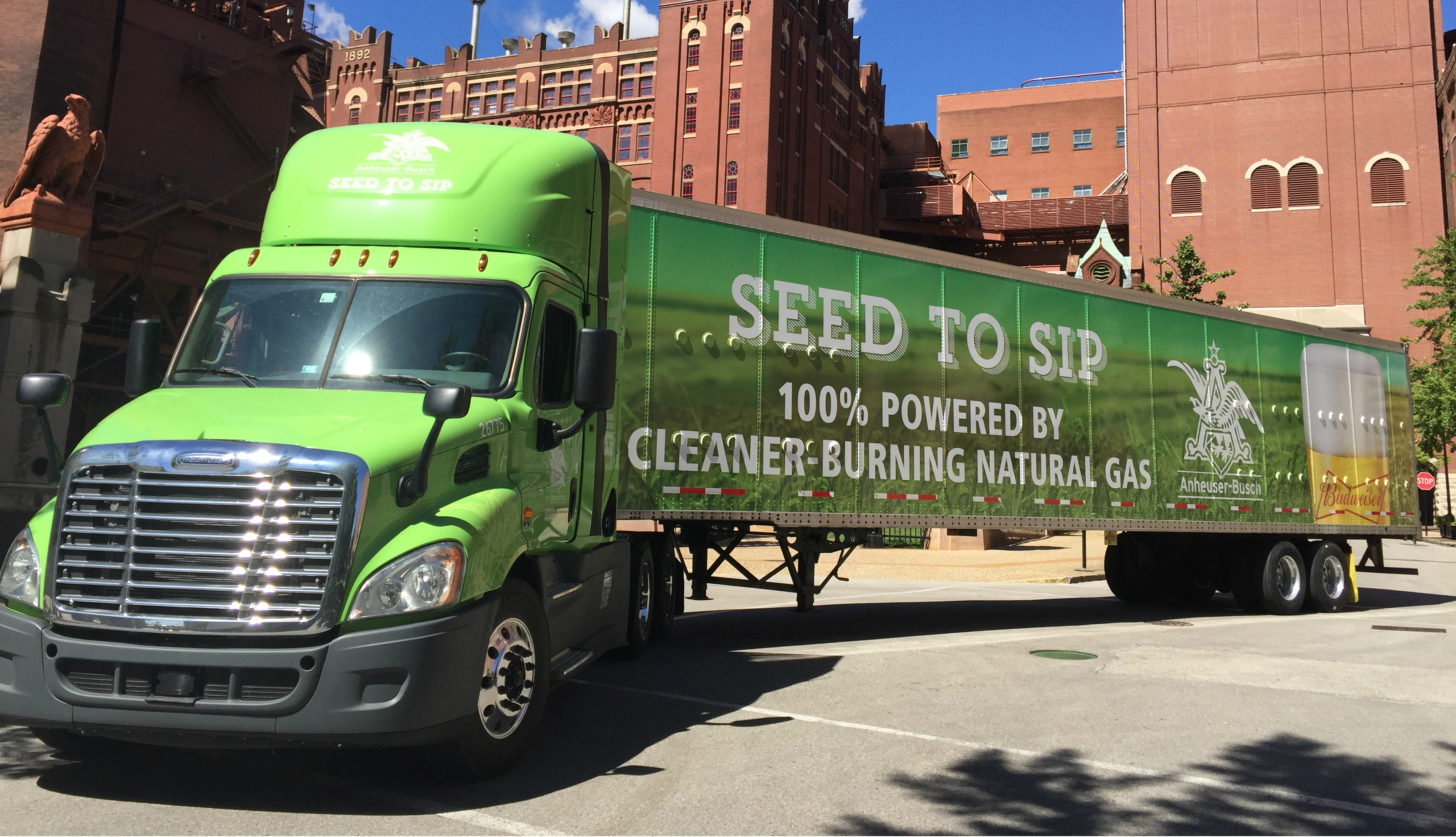 “A conversion of this scale is indicative of the commitment we’ve made to deploying more sustainable technologies and processes at each state of the brewing process — from Seed to Sip,” said James Sebrot, senior director of transportation for Anheuser-Busch, in a statement.

The investment follows an upgrade project at its Houston brewery last year. Overall, slightly less than one-third of the Anheuser-Busch domestic fleet runs on cleaner fuels. Similar programs are under way in China, Europe and Brazil.

One factor that was instrumental in making this happen was the company’s negotiation of a contract for a CNG fueling facility.