When the state of Hawaii and the U.S. Department of Energy launched the Hawaii Clean Energy Initiative in 2008 — an effort for which RMI provided detailed and comprehensive policy recommendations to the state — their goal was simple: transition the island state off the imported oil that supplies 90 percent of its energy at an annual cost of $5 billion to $7 billion. An associated roadmap plans to achieve 70 percent clean energy by 2030 — 30 percent through energy efficiency measures, the remaining 40 percent through renewables.

But how to get there from here? The National Renewable Energy Laboratory's June Hawaii Solar Integration Study found that renewables — especially wind and solar, with an emphasis on solar — could provide 20 percent or more of Hawaii's electricity needs without requiring major system changes. But that'd be only halfway to the stated 40-percent-renewables goal.

Amazingly, National Renewable Energy Laboratory's 20-percent-penetration day already may be here. As of Q3 2013, Hawaii again ranked among the top 10 states for both new and cumulative installed PV capacity, according to the Solar Energy Industries Association. The Hawaiian Electric Company supplies power to 95 percent of the state's population. Hawaiian Electric Company's system maps show that many of the grid's circuits on islands such as Oahu and Maui already have so much distributed generation, primarily rooftop solar, that their output exceeds 100 percent of daytime minimum load. In fact, the most distributed generation-congested circuits are now even reaching 15 percent peak load (some circuits hit an astounding 50 to 75 percent or more), approaching or surpassing the levels at which the National Renewable Energy Laboratory study suggests grid operators need to start thinking harder about how to add more solar without compromising system performance.

The result — for now — is potential frustration for customers rushing to put solar on their roofs, in part to escape (or at least take a bite out of) residential electricity prices averaging 36 cents per kWh — the most of any U.S. state and triple the national average.

Some customers are being told they can't put solar on their roofs and connect to the grid — at least not yet. Hawaiian Electric Company says it must first conduct feasibility studies to figure out how to accommodate more solar on the grid safely, without destabilizing the system. Such studies could take two years or more, raising the ire of some solar advocates.

Even so, some new solar PV customers are being told to wait — and many don't want to.

A December Bloomberg story, for example, highlighted an Oahu homeowner who spent $35,000 on a 5.9-kW PV system, only to be told he couldn't connect it to the grid. He's not alone. Some observers estimate hundreds, if not thousands, of customers find themselves in similar situations. 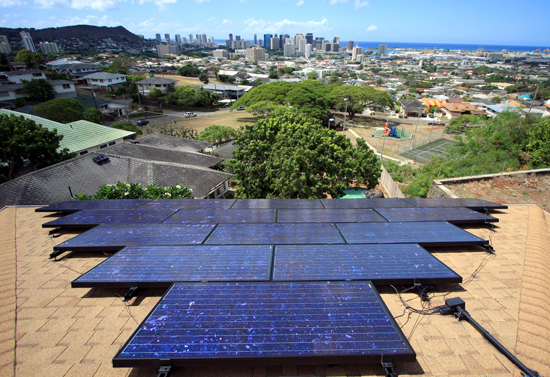 Rise of the distributed defectors

Customers impatient to wait for Hawaiian Electric Company to complete its study are left with a difficult decision: abandon their solar PV plans and continue paying expensive retail prices for grid electricity, or defect from the grid entirely.

The latter is exactly what happened in the case of a Maui Builders and Maui Solar Energy Systems residential client. "We were going to install a grid backup system, this way we could size the battery bank in a more optimistic fashion," Maui Builders and Maui Solar president John Bews explained, "but the local utility balked." So Bews and his crew took the entire house off the grid.

Such a customer grid defection increasingly could become a possibility, and not just in Hawaii where conditions are ripe, but in other geographies throughout the United States, from Los Angeles, Calif., to Westchester County, N.Y., as the levelized cost of energy for solar-plus-battery systems reaches or undercuts economic parity with grid-sourced electricity at comparable reliability.

Utilities have known this day is coming. A January 2013 Edison Electric Institute report, "Disruptive Challenges," put the issue front and center. Other reports and studies from the likes of National Renewable Energy Laboratory and Lawrence Berkeley National Laboratory have looked at the issue as well. But no one has more specifically analyzed where and when grid parity could happen — until now.

"For a long time, the mentality in the energy industry has been that battery storage will become economic right around the same time we figure out cold fusion," said Leia Guccione, senior associate in RMI's electricity practice. In other words, parity won't happen anytime soon. But that antiquated outlook is proving wrong.

According to Solar Energy Industries Association, in the past two years (Q3 2011 to Q3 2013) the average installed cost of a completed U.S. solar PV system has fallen 33 percent, from $4.50 to $3 per watt. And further cost drops are clearly in the cards, in part because of RMI's solar balance-of-systems work. The result is solar installations "at rates we've never seen before," said Guccione. Indeed, 2013 proved the first year in which solar PV beat wind for new capacity additions globally, according to Bloomberg New Energy Finance projections late last year.

The rest of the story is in continuing sharp falls in battery storage prices, coupled with rapidly expanding market size, largely via growth in electric vehicles. "This has been the year of awakening on storage broadly," said RMI managing director Jon Creyts. Guccione added: "The inevitability of combining these two — solar plus storage — is now starting to reach a critical threshold."

The influence of motivation and geography

That inevitability is already becoming a reality among some early adopters. Their motives vary, from islands where an economic case is already evident, to interests in resiliency and backup power, to desire for self-sufficiency and energy independence, to climate concerns and a desire for a low- or zero-carbon energy footprint.

Recent fights over the evolution of net metering are also driving the issue, with customers looking at storage behind the meter as a viable option to take the grid and the utility out of the equation. RMI electricity principal Dan Seif explained: "If you can't sell (surplus power) back to the grid or if the payback is very poor — as in some revised net metering scenarios — then you have more reason to go toward storage."

Such motivation is also there for commercial customers with steep demand charges. Say a customer normally draws 50 kW of power, but has spikes to 100 kW. The customer pays (heftily) for the size of that spike, which solar-plus-battery systems can knock down. "You get a lot of bang for your battery buck that way," said Seif.

But beyond early adopters, the day is coming — and sooner rather than later — when solar-plus-storage systems could become cheaper than the macro-grid. That's the real step-change.

The resounding conclusion is that grid parity for solar-plus-storage systems is coming in the foreseeable future. It's already in Hawaii for commercial customers, and it'll be here in the next 5 to 20 years, including some residential market segments, across many other scenarios, including in New York and California.

This is, in short, a big deal. Although industry estimates have solar PV alone reaching grid parity even sooner across a much broader swath of the market, PV-only systems fundamentally remain grid dependent, because for the vast majority of customers solar produces a surplus of energy during the day and a total deficit at night. (This dependency is at the heart of debates about revising net-metering policies and value-of-solar tariffs.) Solar-plus-battery systems, on the other hand, allow customers to completely sever ties with their utility, if they choose.

Staying with the grid for max benefit at least cost

Defecting from the grid entirely actually doesn't yield an optimal energy solution in many situations.

"You don't want to defect because the greatest value comes from staying connected," explained RMI's Guccione. "When you're off the grid, you need to invest in redundancy and into oversizing the system, so you end up taking a 'penalty' that ranges from 10 to 50 percent of the cost of the system, just for being off grid. You can reduce your annual operating cost by staying grid connected, where you can more optimally size your system and participate in markets, accessing new value streams."

The current electricity system has similar issues with overbuild too, where the system has more capacity than it needs at any one point in time. Having smaller, modular resources as part of the supply base can help maintain a better balance between supply and demand as customers' needs shift, so solar-plus-storage offers potential benefits to the grid as much as the grid offers benefits to solar-plus-storage systems.

"The death spiral is not in anyone's interests, really. It's bad for society as a whole," added Peter Lilienthall, CEO of Homer Energy. "We've got this infrastructure in place. Even if it's used in a different way than we have in the past, or it's used less to some extent, it's still valuable."

But while it may not be in everyone's best interests to defect, it's still a very real possibility. "For customers, this is going to become a real option," said Guccione. "Once you invent something, you can't un-invent it. This technology will be adopted, and utilities need to prepare for a future where it does happen."

"Currently, these systems are not being deployed as 'cut-the-cord' technologies (in our region) and are functioning as connected aspects of the grid," said SDG&E's Eisenman. "However, this may change as this technology becomes more available for customers in the near future, and it does represent an evolution of customer-sited options."

The yin and yang of risk and opportunity

The grid defection risk and utility death spiral notwithstanding, should utilities see solar-plus-battery systems as an existential threat? Maybe.

Utilities such as SDG&E agree. "[We] believe these systems have the potential to deliver multiple benefits when integrated with the grid, including enhancing reliability, supporting self-sustaining microgrids, integrating electric vehicles, and smoothing the supply from intermittent renewable generation sources," said Eisenman. In fact, SDG&E has already installed more than a dozen lithium-ion battery systems of its own on the grid, ranging in size from a few kilowatts to half a megawatt of power capacity, and plans to add even more to the grid in keeping with California's recent energy storage mandate.

Solar-plus-battery systems offer other opportunities, too, including reserve capacity, peak shaving, demand charge reductions, and ancillary services such as voltage control and frequency regulation. And having such microgrids transact with the grid — either under current regulations or under a reformed regulatory scenario that allows fairer, more equitable and widespread participation in electricity markets by all stakeholders — can allow everyone (utilities, customers, third-party developers) to derive the most benefit at least cost from the system.

RMI's been working on such utility business-model issues for years, even decades, through projects in its collaborative Electricity Innovation Lab, in papers such as "New Business Models for the Distribution Edge," via DOE-supported work on innovative solar business models, through direct work with utilities and state regulatory commissions, and more, including a forthcoming report on alternative business models that would better leverage the value solar-plus-battery systems can provide.

"At RMI we talk about how we don't want energy per se; rather, we want the things energy provides: hot showers and cold beers," concluded Guccione. "Consumers value having their lights on, having reliable electric power for their electronic devices; commercial customers want to run their businesses. If there's a better way to do that with less energy and at lower cost — such as by integrating distributed solar-plus-storage systems onto the greater grid — that's what customers really value." Amory Lovins added: "And if this comes with islandable microgrid architecture that lets the customers get their vital services even when the big grid fails, that value greatly increases."

"The answer, in my mind," said Maui Solar's Bews, "is battery storage on grid-interactive homes." Time will tell if that comes to pass.