Drilling down into the environmental impacts of the mining industry — and in particular, how those impacts might pencil out financially — isn't as easy as it might seem.

Take the steel supply chain, which starts with a unit of iron ore mined in China, Australia, Brazil or any number of other countries. That raw material, explained Tarek Soliman of climate data and advocacy group CDP, is then sold to a steelmaker and processed in an energy-intensive process.

It sounds like a simple transaction, but it's one with significant implications for the supply chain's climate footprint.

While digging deeper into supply chains is an increasingly central focus for corporate sustainability departments in industries such as consumer goods, a new report (PDF) from Soliman and his colleagues at CDP finds that mining remains a hard-to-wrangle sector. Using a relatively conservative $7-per-ton price on carbon, the organization calculates that mining supply chains contain up to $16 billion in emissions costs when you factor in how raw materials are processed.

There’s this big balloon of emissions that happen elsewhere in the economy that mining companies are supplying the raw materials for.

In the example of steel production, the process of making 1 ton of steel generates almost 2 tons of carbon dioxide (CO2) emissions, according to an MIT analysis of industry data, contributing up to 5 percent of global greenhouse gas emissions.

To better understand how major mining companies are (or aren't) accounting for potential exposure to climate risks in the event of extreme environmental turmoil or regulatory shifts, such as more stringent carbon pricing systems in China and beyond, CDP ranked 12 of the largest publicly listed diversified mining companies "on business readiness for a low-carbon economy transition."

Here's a snapshot of the 12 companies analyzed, ranked by CDP for overall performance on climate issue and assigned letter grades for specific efforts (right click to enlarge):

How companies — particularly those heavily invested in fossil fuel assets such as coal — disclose and manage risks related to climate change is an issue that in recent years has attracted the attention of more investors. In one example that has the attention of several large institutional investors, un-burnable "stranded assets" could cause multi-million-dollar or multi-billion-dollar writedowns, analysts including those at the G20 have warned.

"The stranded assets argument is more focused on certain types of commodities," Soliman said, noting thermal coal as one standout. Still, he added, "Since 2010, the 12 companies that we covered are now producing twice as much oil and gas."

While the mining industry's ties to raw materials are particulary obvious, the issue of climate-related financial disclosure isn't limited to any one business. Just last month, a task force formed by the G20's Financial Stability Board, led by former New York City Mayor Michael Bloomberg, released new guidance on climate disclosure shaped by companies such as Daimler, Dow, BlackRock and JP Morgan Chase.

Although some companies have doubled down on fossil fuel assets in recent years despite longer-term warnings about financial risk, the new CDP report notes that other commodities also offer growth opportunities.

"It’s not necessarily a bleak future for miners," Soliman said. "Companies should really be evaluating where they’re putting their capital."

In particular, metals and other materials needed for clean energy infrastructure, such as solar panels and electric car charging systems, are one area some mining companies are already pursuing.

"They do have an important role to play in a low-carbon transition if they’re supplying things like copper, nickle, cobalt," Soliman said. "I wouldn’t call them green metals, but metals that are going to be needed in a greener world." 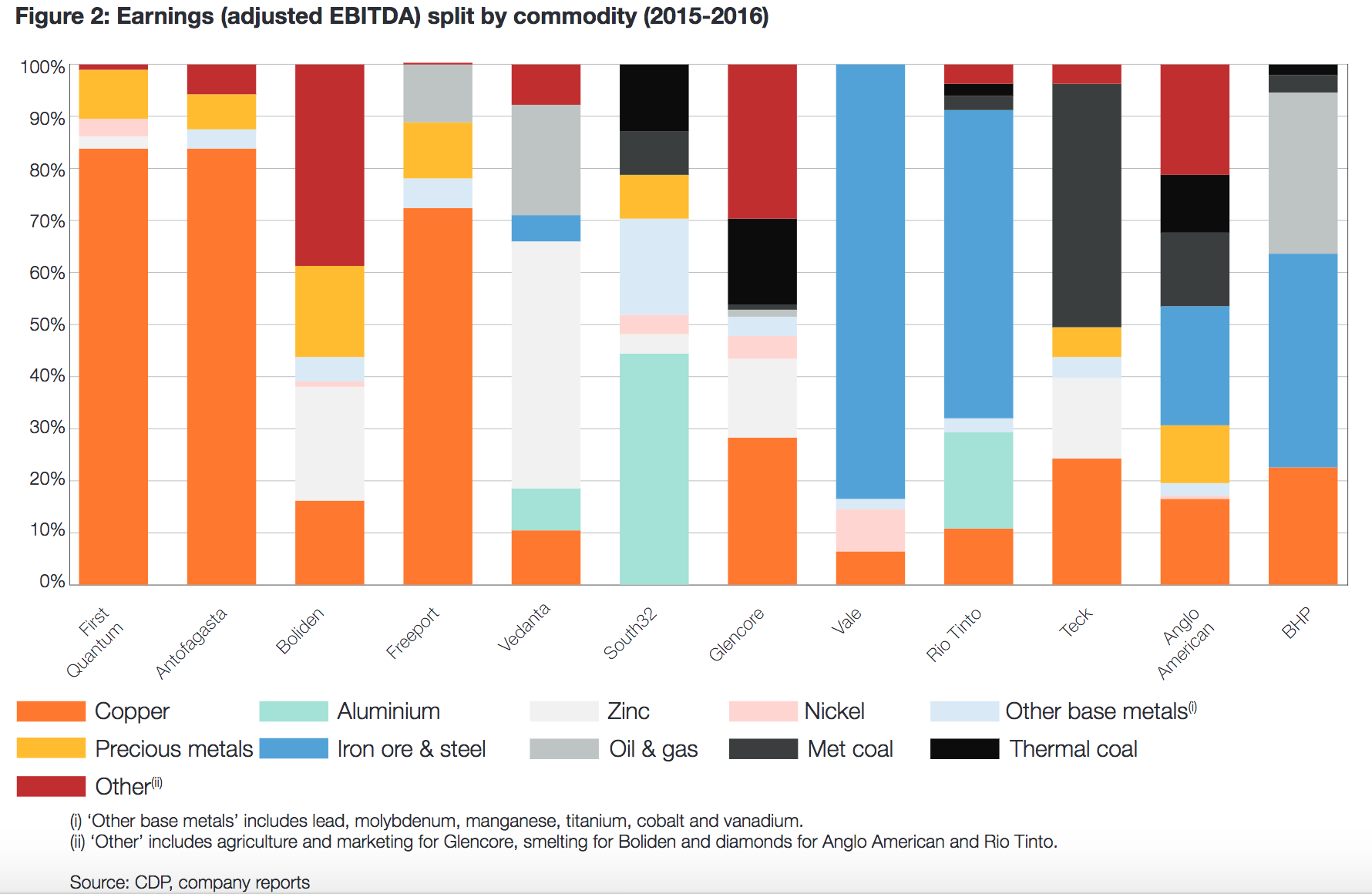 Soliman said the goal of CDP's new report is to provide industry-specific climate data to the marketplace. The question of how that data is interpreted and used, however, is another matter.

Along with carbon emissions intensity throughout the supply chain, the report identified water availability as another operational vulnerability for mining companies.

"Mining companies have struggled for years in terms of finding a reliable supply of water," Soliman said. "Companies have lost production because of water shortages."

Scenario-modeling for specific average temperature increases or water shortages, and what that might mean for individual mining companies, is one concrete action that Soliman expects to see more of.

"I think they all do it internally, but they've started communicating externally," he said of incumbents such as BHP.

Under the moniker of "portfolio resilience," mining companies such as Rio Tinto and Anglo American also have started disclosing more detailed climate data in response to shareholder filings.