In the 40 years between passage of the Toxic Substance Control Act in 1976 and the Frank R. Lautenberg Chemical Safety for the 21st Century Act last year, a generation and a half grew up drinking from baby bottles and cups laden with Bisphenol A, playing with toys manufactured with phthalates and wearing pajamas and T-shirts treated with flame retardants.

During that time, the incidence of testicular cancer in young men doubled in the United States and the average age of the beginning of puberty in girls crept two years earlier, leaving girls significantly more susceptible to breast cancer later in life.

Epidemiologists attribute these alarming trends in reproductive health to several causes, but one factor that's on all their lists is the prevalence of endocrine-disrupting chemicals in our everyday environments — principally BPA, phthalates and perfluorinated substances.

Under the TSCA, chemicals could be introduced into the commercial marketplace without regulatory review of their safety — and 84,000 synthetic chemicals were. Only if a substance's safety was challenged were chemicals reviewed. Only six chemicals flunked the TSCA review. (The Food & Drug Administration finally banned the use of BPAs in infant feeding products in 2012.)

The ink on the new more stringent Chemical Safety Act for the 21st Century is barely dry, but a much more powerful force is already inspiring chemical and materials manufacturers to create safer chemicals — the rule of the consumer marketplace.

Consumer concern has created a huge and fast-growing market opportunity for companies innovating environmentally safe chemicals — estimated to grow to $100 billion by 2020.

Many buyers shun plastic beverage and food containers that might contain BPAs and phthalates, clothing that might contain flame retardants or perfluorinated chemicals, and household cleaning products with any of these ingredients. That has created a huge and fast-growing market opportunity for companies creating environmentally safe chemicals, estimated by Trucost to be $11 billion in 2015 and projected to grow ninefold to nearly $100 billion by 2020.

Dow Chemical, BASF and Eastman Chemical are prioritizing this opportunity with research and development that's driving the introduction of new, more naturally derived additives and materials that they can sell to product makers. Consumer goods companies such as Johnson & Johnson, Levi Strauss & Co., Unilever and Proctor & Gamble have reengineered their supply chains to avoid environmental toxins. And retailers and consumers are rewarding both groups.

So what are the innovations?

Dow Chemical established an entire business line of new elastomers — polyolefin elastomers and olefin block polymers — that bring characteristics such as flexibility to plastics but do not contain chemicals suspected to be endocrine disruptors and carcinogens.

Dow has branded them under the names Infuse and Intune and sold them to consumer product makers and industrial users. One of its customers is Munchkin Baby Products, which eliminated BPAs and phthalates containing materials from its supply chains and now uses Dow’s Infuse to make children’s supplies.

Last year, Dow’s lab developed a new polyolefin technology as a replacement for one of the remaining widespread uses of BPA additives — the linings of canned food and beverages.

Dow’s Canvera can replace epoxy coating systems with an aquenous polyolefin dispersion that manufacturers can apply to metal surfaces using the same equipment they used with the epoxy coatings. The product has won two innovation awards: one from Business Intelligence Group and inclusion in the R&D 100, a select group of innovators that include Lawrence Berkeley National Lab and MIT, along with a few companies.

Dow isn't the only company being recognized for its advances. BASF’s approach has won it the gold standard as far as consumer scrutiny of safe products: it received a Safer Choice Innovator Award last year from the U.S. Environmental Protection Agency. Safer Choice criteria offer a strict set of guidelines; only companies that pass them can use the label on their products — which many consumers look for.

One of BASF’s innovative breakthroughs is Ecovio, a bio-based, biodegradable and compostable polymer. Its first commercial uses are in coffee capsules and packaging, but BASF sees applications in a range of consumer and industrial products as it continues development. As a bio-based polymer derived from renewable sources based on sugars, Ecovio does not contain synthetic compounds that interrupt natural human biology. Yet, BASF said, it has the same properties as conventional non-biodegradable standard plastics.

As of last year, 74 percent of BASF's sales are from products that meet a basic definition of sustainable while 23 percent make a clear contribution to sustainability.

The EPA's Safer Choice program recognized BASF for its overall systematic approach to creating environmentally healthy products. BASF scrutinizes all of its products and product development through the lens of a Sustainable Solutions Steering methodology.

As of last year, 74 percent of BASF's sales are from products that meet a basic definition of sustainable under that program while 23 percent make a clear contribution to the cause of sustainability. Additionally, Safer Choice recognized BASF for the fact that it is "continually adding new products to the CleanGredients list," the Safer Choice list of approved products.

The first chemical company to introduce a plasticizer that met the EPA’s Safer Choice chemical standards was Eastman. Its 168 SG non-phthalate plasticizer is a non-sexy name for a breakthrough product, but it was the first plastics additive providing flexibility and bendability to materials without adding toxicity. The substance is used to make toys, medical devices, flooring and other products that require flexible vinyl.

Product makers that have innovated their way out of potential carginogenic and endocrine-disrupting toxins include Levi Strauss & Co. Levi also was among the most recent winners of the Safer Choice Innovator awards, with the EPA commending it for using the strict criteria of the Safer Choice program to develop its own procurement criteria.

Levi's Restricted Substances List (PDF) is shared with all its suppliers worldwide, naming chemicals it will not permit in its products or production process because of their potential impact on consumers, workers and the environment. The list includes substances ranging from Azo Colorants to flame retardants, biocides, phthalates, PVCs, dioxins and perfluorinated chemicals. 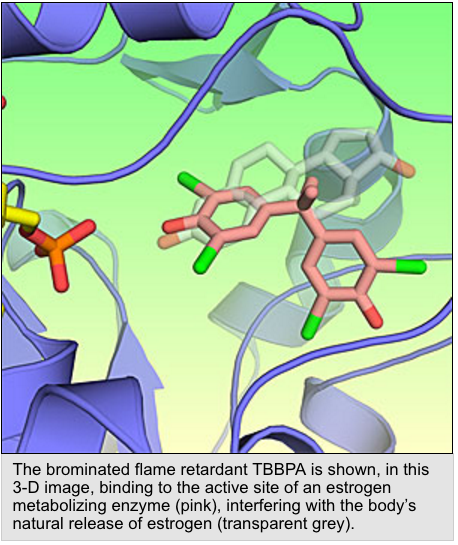 This list makes Levi Strauss novel among clothing manufacturers because perfluorochemicals are what is added for stain resistance; azo dyes are a common colorant and flame retardants were for a long time nearly ubiquitous in clothing.

But the company has shown that eliminating some 24 chemicals from products and production is not only possible but profitable."Levi Strauss demonstrated that its factories can make clothing for the global market using safer chemicals," noted the Safer Choice program.

Similarly, Johnson & Johnson employs an Earthwards process by which all of its product development and business development is judged. It includes safety assessments on any chemical or material before its use in a product by a team of toxicologists and medical doctors unless the material is already "generally recognized as safe" by major regulatory authorities around the world.

And J&J has its doctrine of principles that must be followed in evaluating new product materials: Understand and communicate product chemistry; thoroughly assess and act on risks; employ safety standards that are science-based: commit to continuous improvement; support public policies and industry standards; and educate stakeholders about J&J’s position.

Being environmentally and socially responsible goes hand in hand with running a profitable business.

BASF, Dow, Levi Strauss and other companies that have eschewed suspected toxins and environmental hazards are finding it is good business.

These days, "being environmentally and socially responsible goes hand in hand with running a profitable business," Charlene Wall-Warren, director of sustainability for BASF’s North America operations, wrote in an email. "Creating sustainable products and services is driven by several business factors," among them consumer expectations, new laws, uncertainty about the cost and availability of raw materials and resources.

BASF financial reporting describes its innovation in sustainability products as "a growth driver" for the company. By comparison, BASF’s oil and gas businesses saw steep declines in sales and profitability, hurting its overall year-end results.

How collaboration can lead to better decisions on safer chemical alternatives

When it comes to food packaging, what we don't know could hurt us

How leaders from Apple to ZDHC are opening up on chemicals