They are attacking a problem that has been explored very little up to now. Goal: A 65-percent pollution cut in 10 years.

We’ve all seen the images: the albatross carcass stuffed with colorful trinkets, the sea turtle's head caught in a six-pack ring, and the swirling, Texas-size gyres of debris.

Given the estimated 8 million metric tons of plastic "leaking" into the oceans annually and its non-biodegradable nature, the problem of marine plastic pollution appears insurmountable.

Yet the Ocean Conservancy is making a first attempt at a large-scale, long-term solution. It is releasing an ambitious plastic-reduction strategy along with the Trash Free Seas Alliance it spearheads, which includes seemingly unlikely bedfellows as Dow Chemical and Coca-Cola.

The nonprofit's report this week serves as a call-to-arms to national governments, multinational organizations, industry and technology providers alike. "Stemming the Tide: Land-based Strategies for a Plastic-Free Ocean" lays out solutions to eliminate ocean trash by preventing it from getting into the oceans in the first place.

Its focus is sharp on the five countries identified as producers of more than half of land-based plastic-waste that winds up in waterways: China; Indonesia; the Philippines; Thailand; and Vietnam. China alone is responsible for 25 percent.

These five nations have all succeeded at achieving significant development and industrialization in recent years, and their economic growth has lead to waste production that far surpasses local waste-management systems.

The report proposes to reduce plastic pollution from these five sources by 65 percent over 10 years.

The strategy laid out in this solutions-oriented report is clear: Eliminate ocean trash by preventing it from getting into the oceans in the first place.

It's important to debunk common myths about plastic, he added, such as "that it comes from everywhere equally," that "you can recycle your way out of it," or that it's "all about redesign." (Yes, we want redesign, but if you wait for such options to be effective at a large scale, "the ocean will be swamped," Merkl said.) Plus, only 3 percent of marine plastic pollution is circulating in those gyres that have come to symbolize the problem. 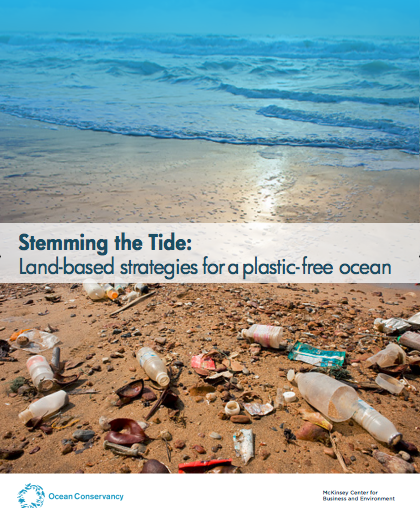 Only after we debunk these myths can we effectively do what needs to be done in parallel with the larger circular economy efforts, to prevent 250 million tons of plastic from entering the ocean, "to stop the avalanche now," he said.

The report details pollution-reduction solutions and evaluates each by measuring the estimated cost against the estimated metric ton of plastic leakage avoided. The solutions largely focus on mitigation, treatment and collection.

The first order of business is to keep trash that already has been collected from escaping. Twenty-five percent of the plastic that winds up in the oceans in the top five countries originates after it has been collected, due to flaws within waste-management systems, such as improper dumping. So the report calls for a concerted effort to improve the waste transport systems, increase the use of formal dumps and relocate or secure the dumps near waterways. 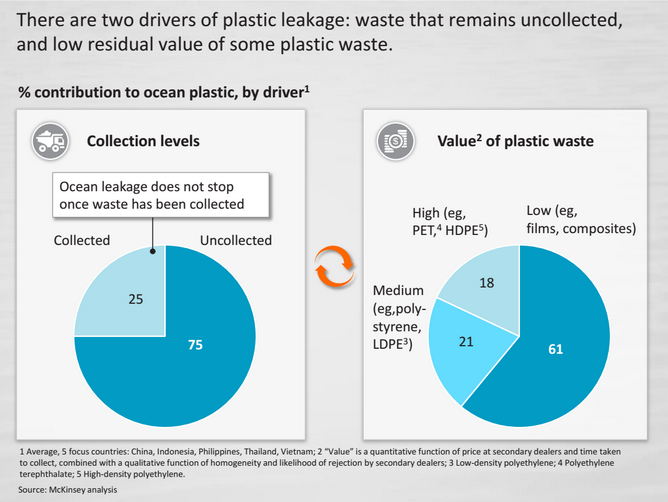 The second task would be to crank up collection to 80 percent. With just these two strategies in the five countries, 50 percent of global plastic leakage would be mitigated.

Currently, though, only 20 percent of the waste plastic in these countries has enough value to be collected and recycled. The report foresees capturing as much of this recyclable material as possible by expanding formal systems of recycling, as well as empowering the informal systems of recycling by subsistence waste-pickers to become safer and a bit more formalized.

What about attempts to recycle plastic debris into products, such as flip-flops or 3D-printed iPhone cases? These are "a drop in the ocean" and do not address the larger problem of the types of soft plastics so common in the waste streams in developing nations, Merkl said.

"There is no silver bullet. The closest we get to a silver bullet is the process of pyrolysis. ... When the price comes down, the profits go back through the value chain."

25 percent of the plastic that is leaked into the oceans originates post-collection.

The report lays out plans to effectively increase the value of the 80 percent of plastic waste considered low-quality, and thereby increase the likelihood of it being collected. This is where Merkl views elements of the circular economy come into play. For example, there is a call to encourage technologies that convert plastic into fuel through gasification and pyrolysis, or into electricity through incineration with energy recovery.

"This story has been written before on renewables to a very large degree," Merkl said. "We need to copy it for energy."

A pioneer region is likely to be in the Philippines, which has progressive mayors and other local leadership. "A lot of people are already constructively engaged," Merkl said. "China is not going to be easy but it’s certainly something we’re going to tackle."

What is in it for the Coca-Cola Company, with its ubiquitous red-label plastic bottles, and the Dow Chemical Company, which makes plastic resins?

“Companies don’t make plastic with the intent of it ending up in the ocean, and we acknowledge the strong role industry must play in order to help eliminate ocean plastic waste by 2035," said Jeff Wooster, global sustainability director of Dow Packaging and Specialty Plastic, in a statement.

"They want to make lots of plastic but don’t want it to end up in the ocean, either," Merkl said. "We should have all the arguments with them about ... the circular economy elements. Yet saying ‘Stop making plastic' is a nonstarter." Instead, "We decide to work with them, accept that is a nonstarter and get their help. We’d love for broad range of folks to join the alliance. There is quite a bit of discussion in environmental community around things like the role of incineration. We need a good robust discussion."

And as solving marine debris is one of the new U.N Sustainable Development Goals, Merkl hopes the discussion to play out on a larger scale than ever.