The past 10 years have seen a boom in new stadium and arena construction in North America and beyond. The sports facilities industry has done a strong job in making sustainability a priority, from construction (LEED certification) to operations (zero-waste games) and much more. But what about the effects of stadium and arena construction and operations, as well as the conduct of mega-events such as the Olympics, on the biodiversity of animal and plant life? That is a topic we have not touched on — until today.

Giulia Carbone is deputy director of the Global Business and Biodiversity Programme at the International Union for Conservation of Nature or IUCN. Here, Giulia delves into what is being done to limit the sports industry's impacts on biodiversity loss.

Lew Blaustein: We need to give more oxygen to the effects of sports on biodiversity so, Giulia, I am so glad we are talking with you. How did you get into the intersection of sports and biodiversity?

Giulia Carbone: Well Lew, from the time I was a girl in Torino…

Blaustein: Are you a Juventus or Torino F.C. fan?

Carbone: Oh, Torino absolutely! Anyway, during my youth, I always loved nature and the also felt that it was only fair that people, no matter their circumstances, needed to have access to it and co-exist with it. Then I went to the University of California at Santa Barbara… 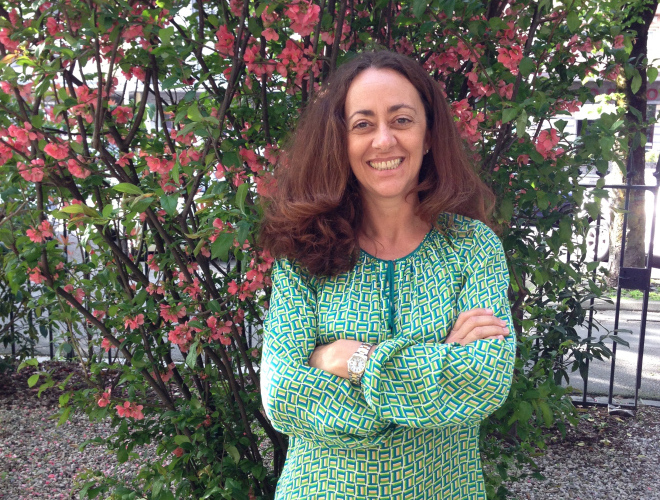 Giulia Carbone, deputy director of the Global Business and Biodiversity Programme at the International Union for Conservation of Nature. (Photo credit: IUCN)

Blaustein: What did you work on for UNEP? When was this?

Carbone: I started at UNEP in 1999, and focused on environmental initiatives for tour operators. Our approach was to bring together like-minded operators and give them the tools and the vision to integrate effective supply chain management, eco-friendly destinations and other protocols.

Our approach was to bring together like-minded operators and give them the tools and the vision to integrate effective supply chain management, eco-friendly destinations and other protocols.

Blaustein: What tour operators took the lead back then on the environment?

Carbone: Tui, a German tourism company now headquartered in the U.K., was really aggressive. They wanted to set the agenda for the tourism sector on supply chain and other sustainability elements and were successful, at least to an extent.

Blaustein: What did you do next?

Carbone: I moved to Switzerland, near Geneva, in 2003 and started working for the International Union for Conservation of Nature or IUCN.

Blaustein: What is the IUCN? It seems like something I should've heard about.

Carbone: You should have. It's been around for 70 years, since 1948. It's a membership organization that includes governments, NGOs large and small and, unlike the U.N., groups of indigenous peoples. Today, it is the world's largest and most diverse environmental network.

We have a congress every four years, and just like for the Olympic Games, there are bids and organizing committees. The host of our June 2020 Congress is going to be Marseilles, France; in 2016, we met in Hawaii, and in 2012, we convened in South Korea.

Blaustein: What does IUCN do?

Carbone: Programmatically, we work in a number of critical conservation issues related to water, forests and oceans, drylands and more. Where possible, we also engage with corporations to show them that leading on the environment, and taking biodiversity conservation into account in their planning and operation, is actually good business. At the beginning of my time at IUCN, my work focused solely on tourism. But then I branched out to the extractive and energy sectors…

Blaustein: Energy? Mining?… That sounds like a big conservation challenge.

Carbone: Yes, but to our way of thinking, it is crucial for mining and energy companies to figure out how they can operate successfully in ways that limit biodiversity loss. As part of this work, we have also focused on the role that biodiversity offsets can play in conservation.

Blaustein: I imagine IUCN has taken some criticisms from others in the environmental movement for working with companies seen as bad actors — or worse.

Carbone: There is some of that for sure, but we believe that collaborating with companies like Rio Tinto in the mining world and Shell in the energy world is important and necessary. They know that their operations have environmental impacts and they are interested in working with us to improve things.

We believe that collaborating with companies like Rio Tinto in the mining world and Shell in the energy world is important and necessary.

Another example was with LafargeHolcim, one of the largest cement companies in the world, who owned hundreds of quarries at the time. In just four years of working with IUCN, biodiversity indicators were put in place, employees were trained to respect and account for biodiversity, standards were adopted — and biodiversity became recognized as an important risk factor, something that had value in being managed.

Blaustein: That’s hard to believe and yet I believe it. … So now sports? Why did IUCN decide to get involved with sports in the first place?

Carbone: The impacts of sport on biodiversity are also significant, but the opportunities to address them are equally huge. The sports industry has enormous influence and reach, so just being able to talk about the value of biodiversity and the role that species play with this audience is incredible.

Blaustein: Absolutely. How did IUCN get started in sports?

Carbone: The IOC approached us about four years ago about one of its bid cities. They were concerned about the bid damaging a UNESCO World Heritage Site. That led to conversations about how the IOC could influence sports federations on biodiversity loss. We were engaged to help bid committees and teams on how to limit biodiversity and species loss during venue construction, allocate funds for conservation and protection, and even to educate them on the value of purchasing climate-related offsets.

Blaustein: Did IUCN work with the summer and winter Olympics bids?

Carbone: Yes, we were involved with the bids for the Olympic Games 2024 and reviewed all the bids from a biodiversity perspective. We are also providing maps of the areas considered to be of high biodiversity value to the potential candidates for the 2026 Winter Olympics. For each of the cities, we have created maps that highlight the location of protected areas, World Heritage sites, Ramsar (intergovernmental treaty that provides the framework for the conservation and wise use of wetlands and their resources) sites and Key Biodiversity Areas. Additionally, we have provided reports that list all the species of animals and plants that have been classified as threatened or close to extinction, in proximity of these sites. These maps are an amazing tool to help the cities plan better on where to place the venues and new infrastructures, and thus reduce the risk of having an impact on important plants and animals as well as key ecosystems.

Blaustein: As of now, it looks like seven cities are considering bids to host the 2026 Winter Olympics, a marked increase as compared to recent cycles. These include Graz, Austria; Calgary, Canada; a joint Italian bid amongst Cortina d’Ampezzo, Milan and Torino; Sapporo, Japan; Sion, Switzerland; Stockholm, Sweden; and Erzurum, Turkey. How does IUCN get the word out about its work in the sports sector?

Sion, Switzerland is one of seven cities looking into bidding on the 2026 Winter Olympics.

Carbone: We just issued the first of a series of reports on Sport and Biodiversity. It's an overview for all of the industry's key constituents… What is the intersection of sports and biodiversity? What are the risks and opportunities? The next report will be more technical than the first one, and it is almost complete. It focuses on how to mitigate biodiversity loss from venue construction. Then, the third one will focus on how to manage impacts on biodiversity in the organization of sporting events, including recommendations for athletes, venue managers and the fans.

What is the intersection of sports and biodiversity? What are the risks and opportunities?

In the future, we hope to focus on things like Natural Capital Accounting and sports; how to manage invasive species; and how to engage fans on biodiversity and involve the media more in these issues.  We have quite a challenge ahead of us.

Blaustein: Who are your audiences for these reports? Sports fans?

Carbone: No, our prime targets are senior level, C-suite executives throughout the sports world, who are not yet convinced biodiversity is an issue they need to be concerned about. We are also targeting those people involved in venue development and planning as well as those organizing sport events.

Blaustein: Do you have a sense as to what percentage of sports executives fit that "unconvinced" label?

Carbone: Actually, I just attended a very cool meeting on sport and the environment, the Sustainable Innovation in Sport Summit 2018 May 2-3 in Amsterdam, and I was very impressed by the level of commitment and involvement of the participants, mostly all representing sport federations, venues and teams. So I think this is a sector that it is already doing a lot of great work and is ready to do more.