Yes, I know, that’s BP’s slogan. But if you are looking for a company that is trying to replace oil with renewable products, consider DuPont.

Brands like Izod (below), Timberland and Calvin Klein Gold all sell clothes made with DuPont’s Sorona, a renewable feedstock made from corn rather than petrochemicals. You’ll also find Sorona in some carpets sold by Mohawk Industries and in the interior fabrics of Toyota hybrids.

DuPont’s Hytrel, a thermoplastic elastomer (basically a rubbery plastic) made from plants, is used instead of oil-based materials in some Salomon ski boots and in automobile components. Zemea, a 100 percent renewably-sourced glycol from DuPont, which is made out of corn, shows up in skincare and cosmetics sold under the Philosophy brand and in Biotone spa products. Susterra, a bio-based propanediol made from corn sugar in Tennessee by a joint venture of DuPont and Tate & Lyle, finds its way into engine coolants and deicing materials. 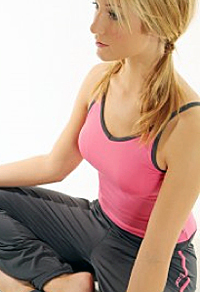 {related_content}DuPont’s efforts to get beyond petroleum are significant, and not just to people who don’t want to smear oil-based product on their face. Replacing petroleum-based products -- from gasoline to plastic bags to lipstick -- with renewably-sourced products makes consumption, and the economy more sustainable.

That’s partly why DuPont is doing it, but the primary reason that the company is developing alternatives to oil is that it believes oil will become scarcer and prices will rise, opening the door for renewable alternatives.

Whether the focus is on energy security, climate change, population growth or the new reality of the global economy where demand for natural resources is increasing while availability is decreasing, the world needs to use energy smarter and generate it from more renewable sources.

As result, the company is developing a portfolio of biofuels including cellulosic ethanol; films, resins and substrates for the solar photovoltaic industry; new materials that insulate and encapsulate the components of wind turbines; membranes for fuel cells, and so on. Because DuPont is a business-to-business science company, its efforts are typically not seen by consumers. (The company’s best-known consumer brand is Corian, which is used in counter tops.) But as a Fortune 500 company with $27-billion in annual revenues, DuPont’s activities help shape countless other businesses and their products.

Recently, I spoke with Linda Fisher, who is DuPont’s chief sustainability officer. Because we’re approaching the 40th anniversary of Earth Day, we talked a bit about how DuPont’s environmental practices have evolved.

As a chemical company, whose 19th century roots are in the gunpowder business, DuPont used to be one of the U.S.’s leading polluters. “In the 1970s,” Fisher said,  “DuPont, like every other company, got hit with new environmental laws and regulations. That drove the agenda.”

Compliance was the focus, and it remains important, she said. (As recently as 2002, a University of Massachusetts study ranked DuPont as America’s top corporate air polluter.)

During the 1980s and 1990s, the focus shifted to energy use and energy efficiency. DuPont now uses less energy than it did in 1990, even though the company is 40 percent bigger today. (To his credit, Chad Holliday, DuPont’s former CEO, was a key driver of what is now the U.S. Climate Action Partnership, the alliance of big business and big NGOs that has lobbied for greenhouse gas regulation, so far to no avail.)

The attention to energy efficiency and climate change was a step forward from pollution prevention, and the company generated huge cost savings, Fisher told me, but the focus remained internal, on the company’s plants and operations.

More recently, DuPont has turned outward. “We’ve been focused more on what are the growth opportunities for the business that are driven by sustainability,” Fisher said. Instead of environmental issues being seen only as costs, they are now potential contributors to top line growth. As it happens, Fisher’s own career trajectory mirrors these changes. A lawyer, she worked for years enforcing pollution laws, most recently as deputy administrator of U.S. EPA, before joining DuPont in 2004. 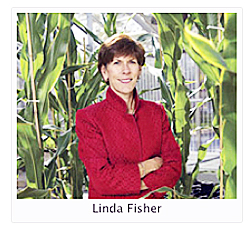 Arguably, DuPont has ahead of its time in promoting the idea of sustainable growth. Holliday co-authored a 2002 book called Walking the Talk: The Business Case for Sustainable Development. (It wasn’t a page-turner, as I recall.) In 2003, I wrote a story for FORTUNE on corporate responsibility, headlined Tree Huggers, Soy Lovers and Profits, that featured DuPont. The idea, it must be said, does not appear to have produced much tangible value for  shareholders. As this chart shows, DuPont shares have underperformed the S&P500 during the last five years.

Being early isn’t necessarily the same as being wrong, though. Fisher told me that more of DuPont’s customers are asking for products that are energy efficient and sustainable. Automakers, for example, are among DuPont’s biggest customers and “they’re very committed to having renewably sourced materials in their cars,” she said.

Consumers and investors are paying more attention to potentially toxic chemicals in the cosmetics and personal care industries, according to the Investor Environmental Health Network. “Bio-based materials in the personal care area have a lot of appeal because of the concern about chemicals,” Fisher said.

For DuPont, much will depend on the supply and price of oil and other natural resources.

“The strategy is to take our science and innovation, in the markets where we are strong, and figure out how to meet society’s needs in ways that we are using less of our natural resources and so preserving more resources for the future,” Fisher said.

You can’t argue with that strategy, but you can’t blame shareholders for wondering when it will pay off.