The dying pig in the aisle: How McDonald’s came to transform animal welfare

Excerpted from "The Battle to Do Good: Inside McDonald’s Sustainability Journey," by Bob Langert, published by Emerald Publishing.

I visited my ﬁrst animal slaughterhouse in the fall of 1997: a pig facility. I was there to assess how to start an animal welfare program with an unusual partner, Temple Grandin, who was renowned in her ﬁeld of animal science — and autistic. I was anxious as I entered, not knowing what to expect.

The plant manager directed us into what he called the barn, which was actually a steel and concrete facility the size of a football ﬁeld, with thousands of pigs in multiple pens. I had never liked the term “factory farm,” a derogatory term used by modern agriculture critics to paint a dark picture of such large facilities, but the reality was I felt like I was in an animal factory, not a barn. 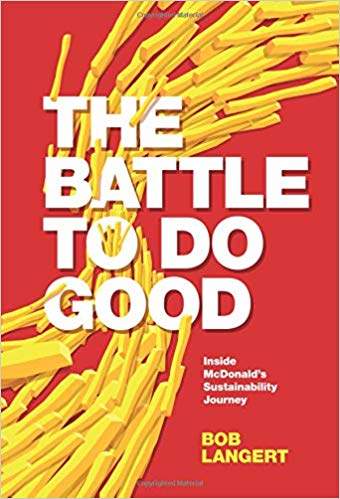 About an hour into the tour, I saw a forklift operator ignore a half-dead pig lying in the aisle, running over its legs. I squirmed. The sight brought me back to a book I had read in high school: "The Jungle," by Upton Sinclair. Though what I observed around me was not the same squalid conditions Sinclair described, I still seethed. How could that person be so callous? Didn’t he see the pig as a living creature? Or did he see the pig as a widget, a production piece?

Seeing the dying animal, Grandin’s eyes jutted out in disgust. She pumped her arms and legs as she leaped to a position kneeling beside the pig as if it were part of her family. She emphatically called for the foreman to take care of the pig.

This was the beginning of my admiration for the most inspiring leader of change I have ever encountered. After seeing Temple Grandin on the ground, becoming one with the animals, experiencing her overt passion and love of animals, I knew something special was unfolding.

I was with Grandin because my boss at McDonald’s, Shelby Yastrow, had handed me another big, bold and bafﬂing assignment late that summer: Figure out how to develop an animal welfare program for our meat suppliers.

My only knowledge of livestock came from watching "Bonanza" on television on Sunday nights as a kid growing up in the 1960s. I grew up on the South Side of Chicago, disconnected from animal agriculture, even though my home was only a few miles from the setting of "The Jungle," the Union Stockyards, Chicago’s center for meatpacking, where Chicago became known as the "hog butcher for the world." This meatpacking district started to disappear just after World War II, and the stockyards ﬁnally closed for good in 1971.

I grew up on the South Side, disconnected from animal agriculture, even though I was only a few miles from the Union Stockyards, where Chicago became known as the 'hog butcher for the world.'

At the time Yastrow tapped me for this new assignment, I was serving as McDonald’s director of environmental affairs, and my work focused mostly on packaging, recycling and energy management — not on farm animals. Yastrow was general counsel and had become the architect of McDonald’s transformation from environmental villain to hero. He had championed a major turnaround of McDonald’s environmental program and reputation, and he had the conﬁdence of the senior leadership team.

Now, the 1990s were presenting another societal issue: animal welfare. The triggering event was a long, complicated, high-proﬁle trial in the United Kingdom, dubbed "McLibel."

In 1990, McDonald’s sued two London Greenpeace (not associated with Greenpeace International) campaigners who were passing out leaﬂets accusing McDonald’s of a long list of wrongs related to nutrition, litter, human rights, rainforests, recycling, waste and animal welfare. McDonald’s head of United Kingdom wanted to stop London Greenpeace from continuing to slander the company. I don’t think he anticipated the ramiﬁcations of giving these two people such a public platform.

The McLibel trial in England started in 1995. It was like the very worst of today’s reality shows. McLibel exposed every wart of McDonald’s, including many animal welfare issues with suppliers, such as hens and hogs crammed into sterile, steel cages.

I was one of the ﬁrst to provide testimony in the Royal Courts of Justice, mostly to answer questions related to McDonald’s environmental practices. Yastrow had advised me to be short and crisp in my answers and to answer only what was asked and nothing more.

However, as I observed the ﬁrst few days of the trial and the interchange between the defendants (who were representing themselves) and the witnesses, I realized that the American Perry Mason approach that Yastrow had suggested wouldn’t work. In England, the courtroom atmosphere was more like a discussion, a dialogue. I would come off as an ugly American if I answered too succinctly.

In England, the courtroom atmosphere was more like a discussion, a dialogue. I would come off as an ugly American if I answered too succinctly.

So, I carefully responded to questions about environmental packaging efforts, which was much easier than discussing what were at the time McDonald’s nonsubstantative policies and programs about animal welfare.

Although the trial was based in the United Kingdom, the power of the emerging digital age created the ﬁrst international internet-based public campaign. The two individuals who created the millions of leaﬂets distributed throughout the United Kingdom, Helen Steel and Dave Morris, were savvy in leveraging the Internet and created a website called McSpotlight to spread the word far and wide about their thoughts regarding "What’s Wrong with McDonald’s." Its introductory paragraph started its sharp anti-McDonald’s rhetoric:

McDonald’s spends more than $2 billion every year worldwide on advertising and promotions, trying to cultivate an image of being a caring and green company that is also a fun place to eat. Children are lured in, often dragging their parents behind them, with the promise of toys and other gimmicks. But behind the smiling face of Ronald McDonald lies the reality: McDonald’s only interest is money, making proﬁts from whomever and whatever they can, just like all multinationals. The company’s sales are now $40 billion a year. The continued worldwide expansion of fast food means more uniformity, less choice and the undermining of local communities.

Today, transparency and sharing of daily minute-by-minute information is the norm. Back in the 1990s, such was not the case. McSpotlight was among the very ﬁrst transparency efforts that traveled the globe through the new channels of the burgeoning internet.

Although it’s difﬁcult to think of it today, imagine the unconnected world transforming to a connected one. Just a few decades ago, there was no Internet, no Google, no Facebook, no Twitter, no smartphones. As the Internet grew and became ubiquitous, we at McDonald’s were not ready, neither nimble enough nor culturally prepared to deal with the ways in which the Internet was changing the dissemination and consumption of information.

Looking back, even with a more concerted, sophisticated effort in place to communicate via the internet, I don’t know how McDonald’s could have communicated its way out of what became a monumental PR disaster.

Technically, McDonald’s won the legal battle, but lost the PR war. With the ﬁnding of 'culpably responsible,' Yastrow believed it was time to do something tangible about animal welfare.

Many labeled the McDonald’s decision to sue the two unknown, ragtag London Greenpeace leaﬂet campaigners as the "world’s biggest corporate PR disaster." Indeed, the trial was an embarrassment for us at McDonald’s. In her book "No Logo," Naomi Klein summarized the agony well:

Over the course of the trial, Steel and Morris meticulously elaborated every one of the pamphlet’s claims, with the assistance of nutritional and environment experts and scientiﬁc studies. With 180 witnesses called to the stand, the company faced dozens of humiliating moments as the court heard stories of food poisoning, failure to pay legal overtime, bogus recycling claims and corporate spies sent to inﬁltrate the ranks of London Greenpeace.

In one particularly telling incident, McDonald’s executives were challenged on the company’s claim that it serves "nutritious food": David Green, senior vice president of marketing, expressed his opinion that Coca-Cola is nutritious because it is "providing water, and I think that is part of a balanced diet." In another embarrassing exchange, McDonald’s executive Ed Oakley explained to Steel that the McDonald’s garbage stuffed into landﬁlls is "a beneﬁt, otherwise you will end up with lots of vast empty gravel pits all over the country."

The longest and most expensive civil case in U.K. history ﬁnally ended in mid-1997. Although the ﬁndings overall favored McDonald’s, the court determined that McDonald’s was "culpably responsible" for cruel practices with broiler chickens, layer hens and sows (mother pigs).

Technically, McDonald’s won the legal battle, but the company lost the PR war. With the ﬁnding of "culpably responsible," Yastrow believed it was time to do something tangible about animal welfare. His long-time back-and-forth interplay with a rumpled but shrewd animal activist was about to create a solution.

5 revelations from a talk with Temple Grandin

The chicken or the egg — or neither