A new effort to grade computer, television, printer and game console companies on their efforts to take back and recycle their old products finds most firms struggling to succeed -- news that comes to no surprise for anyone following progress on e-waste in the United States.

In the rankings, created by the Electronics Takeback Coalition, Dell and Asus score the highest, with B and B- grades, respectively. Samsung also earned a B grade, but was simultaneously dinged with a "dishonorable mention" by the group. According to its report card:

Samsung has made tremendous strides with its takeback program over the last two years and has earned a B on this year's report card. However, this report must also include a Dishonorable Mention because of serious concerns about Samsung's occupational health record at manufacturing plants in Korea, where many young workers have been diagnosed with blood cancers and several have already died.

"If you don't offer physical collection sites or events, you are not serious about your takeback program," Barbara Kyle, National Coordinator of the Electronics TakeBack Coalition, said in a statement. "With so many cheap consumer printers being practically disposable these days, the printer companies should be doing a lot more to make sure they get their old equipment back. Most of the printer companies simply offer mailback recycling programs, but statistics show that people won't mail back larger products like printers."

Dell of course has been leading on e-waste for some time. In May 2009, the company announced a new policy of no e-waste exports, the first large IT manufacturer to do so. Dell earned 57 out of 100 points for its B grade, so the report card is graded on a pretty steep curve.

The key criteria the Electronics Takeback Coalition used in developing the grades are:

"Announcing that you have a takeback program really isn't enough," Robin Schneider, Executive Director of the Texas Campaign for the Environment and Vice Chair of the Electronics TakeBack Coalition, said in a statement. "Most electronics companies have some kind of takeback program -- but what we are looking at is whether these programs are actually effective in collecting their old products, and are making sure they are not just being exported to developing nations."

The list of grades is below; a summary of the entire listing, as well as points received by each company, is available for download from GreenBiz.com. 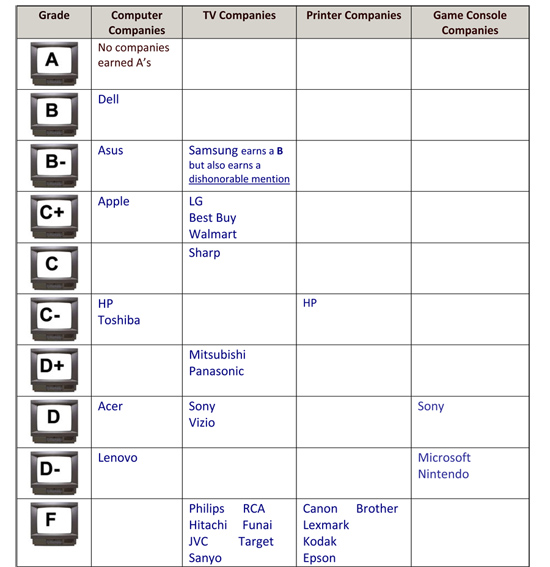