Last year, we had a bit of fun with some of the more out-there Earth Day pitches -- see "You're Doing it Wrong: Five Earth Day Pitches that Failed." It was all in good-natured fun, and was a nice way to blow off some of the Earth Day related overload, so we thought we'd do it again this year.

We had no idea what we were getting into.

No doubt due in large part to Earth Day's 40th anniversary, as well as the steady -- if painfully, terrifyingly slow -- march toward greener companies and greener individuals, what was last year a steady stream of announcements tied (reasonably or not) to Earth Day, this year became a deluge.

In 2010, not only did the message barrage begin in February ("Christmas creep" comes to Earth Day), but I currently have 287 emails about Earth Day in my inbox.

{related_content}As a result, I'm afraid we're not going to be able to do a pithy Top 5 (or Bottom 5, as the case may be) for Earth Day Fails this year -- there is just far too much material to work with.

That said, below are some of the notable notes that landed at GreenBiz.com world headquarters during Earth Season 2010. Enjoy, and if you have any other egregious examples, please link to them in the comments or send us an email.

Shopping Our Way to Sustainability

Let's just get this out of the way up front: Shopping promotions for Earth Day are ubiquitous but unacceptable. Surely, the argument can be made that getting people to buy greener products is better than buying the alternative, but using April 22 to drive sales not only misses the point, but defeats the purpose.

Perhaps the Buy Nothing Day organizers would earn a more receptive audience by shifting from its current post-Thanksgiving Black Friday to Earth Day....

That said, here are some of the most egregious shopping and product-promo pitches for Earth Day 2010:

• Buy a non-efficient lightbulb, get an efficient lightbulb that you don't want and won't use, for free! Rejuvenation, a company that makes lighting and fixtures for older, hard-to-find lighting systems, had the befuddling idea to send out free (unsolicited) CFLs to customers with every purchase of another, potentially non-energy efficient, lightbulb. The truly befuddling part is that the company is pitching this promotion as an "offset" for their own emissions -- as if 1 + 1 = 0.

• The 10 green schwag items you'll be getting for the next year. The Advertising Specialty Institute has developed a list of the 10 products that are best suited for "eco-friendly giveaways" for this year. They include:
1. Elephant-Poo Notebook ("The ultimate recycled item")
5. Recycled Tires Jar Opener
6. Pine Tree Seedling (These really took off -- see below)
7. Organic T-shirt (Ditto)
8. Compostable Pens (What?)

• Sublime to Connect with Celebrities for Earth Day's 40th Anniversary. Apparently, they will connect by handing out unsolicited "Imprint Comfort Mats" to Justin Timberlake, Penelope Cruz and Leonardo DiCaprio. No details are given, either about the mats, their "eco" properties, or how the celebrities will receive said mats.

• Make your office slightly greener. Office Depot launched a new site to promote greener office products. And while most offices could use all the help in the world reducing their impacts, this promotion only highlights how far we have to come: One of the highlighted products is an 18-pad pack of post-it notes that contain a whopping 30 percent post-consumer recycled content.


One of the most widespread pitches among all these Earth Day emails is tree-planting. Whether it's tied to Arbor Day (lots of companies did double-duty with their eco-holiday promotions), or a stand-alone Earth Day pitch, if half of these companies are half as successful as they hope to be, we'll be overrun with trees in no time.

Most of the products tied to tree-planting pitches are completely unrelated to trees in any conceivable way. For example, VeeV spirits, a company that makes alcohol using the açai berry, is planting a tree for every "VeeVtini" ordered nationwide in April.

Georgia Natural Gas, a company that captures gas from landfills, is giving away 200 seedlings to visitors at its Earth Day Fair booth in Atlanta's Atlantic Station. And Massachusetts-based homebuilder Woodmeister Master Builders is offering to preserve one foot of forest for each square foot of construction it finishes.

What is it about underwear and trees? Or t-shirts and trees, for that matter? No fewer than three manufacturers of unmentionables, PACT (whom we've previously covered), Hanes (also covered a-plenty on GreenBiz), and Threadless are donating money to plant trees for sales of underwear, undershirts and overshirts in honor of the big day. Threadless is also putting its Nature Themed Tees on sale for Earth Day. Here's how PACT is pitching its tree-planting project: 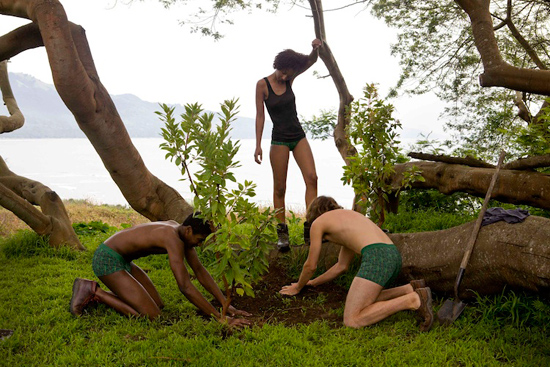 Out of the hundreds of pitches we got this year, a few had to be re-read, sometimes repeatedly, before it made any sense. Among the most puzzling pitches for Earth Day 40:

• Postal Service Expands Prescription Mail Back. The quote that came with the pitch says it all -- or doesn't. "The 40th anniversary of Earth Day is a perfect opportunity to tell Americans the good news about the expanded prescription mail-back program," said Sam Pulcrano, vice president, Sustainability. "It is another way the Postal Service demonstrates its commitment to the environment."

• The Honest Kitchen Reveals Wishes Fish Treat for Earth Day. Are fish-treats the Earth Day equivalent of the birthday cake? Lord, I hope not.

• Taking the "eco-hippie" stereotype too far. Apparently, if you have bad body odor, you should use a stainless steel bar from DeOdorWorks rather than landfill-filling deodorant. Please, visit their website to see what "internationally renowned Dr. Dave E. David and others have to say" about this. And then let us know what you learn. 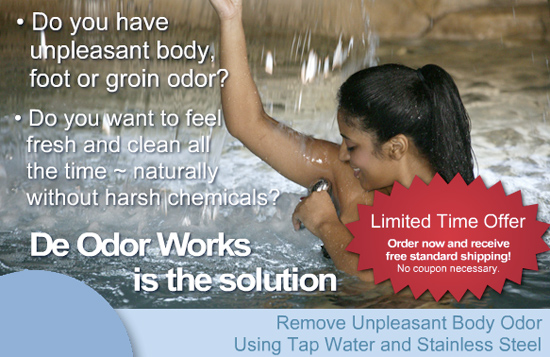 • Timberland's Eco-Love Survey. Apparently aims to tell us what men are looking for in Earth-friendly partners:

• Must Love the Earth. Fifty-four percent of men would question whether to start a relationship with someone who litters.
• Guys Dig Green. One-quarter of men think "green" women make better life partners or friends than those who aren't so environmentally responsible.
• Plan an Eco-date. More than 40 percent of men would be more interested in an "adventure" date like hiking or rock climbing or a charity or service-focused date like tree planting [Again with the trees! -- Ed.], rather than the traditional "dinner and a movie" date.

And truly, no roundup of weird pitches would be complete without an entry from the Competitive Enterprise Institute -- the folks who brought you Human Achievement Hour. For Earth Day, CEI has created a new activist group, "Freedom Action," that has released a report finally outing those environmental "fat cats" with their "lavish salaries." Thanks to CEI, we now know that "Earth Day = Pay Day."

• In case you can't decide what cause you support. Verizon Wireless has linked two never-before-linked causes with its announcement that "Floridians Can Honor 40th Anniversary of Earth Day, Help Domestic Violence Victims by Recycling Wireless Phones."

And that, at long last, wraps up Earth Day 2010 -- now all that's left is to clean up the mess from all those Earth Day parties. Happy 40th, Earth Day!

If you've got other great examples of off-the-wall Earth Day pitches, send us an email at [email protected] or post a link in the comments below, and we'll update this post with the best finds.