It’s 10 o'clock on a sunny Wednesday morning, and several dozen people representing Oakland businesses, nonprofits, government agencies and community groups have convened to tackle a daunting task: figure out how to brace a city already going through massive amounts of change for looming environmental, social and economic shocks.

"Today really begins a multi-year process," said Victoria Salinas, who was hired last fall as Oakland's first chief resilience officer after serving with disaster relief agencies in Sierra Leone, Haiti and post-Hurricane Katrina New Orleans. "What should our priorities be? How can we come together?"

The day-long workshop, held last week in a community center nestled on the north side of downtown’s Lake Merritt, marks the city’s participation in both the Rockefeller Foundation’s global 100 Resilient Cities initiative and the hyper-local 2015 Community Resilience Challenge.

“There’s a tension. On the one hand, resilience is broad-based,” said 100 Resilient Cities CEO Michael Berzowitz. “On the other hand, in order to get to anything that’s doable, that can be implemented, we've got to get more specific.”

That challenge crystalizes with the broad cross-section of issues that quickly emerge as chief concerns for the city's future well-being: environmental disasters such as earthquakes; ill-effects of climate change like sea-level rise; or simmering social and economic stresses including urban food insecurity, skyrocketing housing costs, failing schools and entrenched community violence.

The melding of interconnected environmental risks with commercial prosperity and social stability reflects the growing (if not somewhat overwhelming) conversation around local resilience.

As Volans founder John Elkington recently described, cities increasingly relied upon to take concrete action on climate face a challenge in balancing proactive and reactive forces: “Resilience addresses how we best prepare our economies, cities and companies for the downsides of the world we are creating. Sustainability, by contrast, seeks to address the root causes of the Great Acceleration — and to ensure that future growth happens within Planetary Boundaries.”

For Oakland — “the new Brooklyn,” as a few East Coast writers have deemed the other city by the Bay — the difficulty of juggling long-term risks and already apparent conflict is especially pronounced. The 78-square-mile city home to some 400,000 people is quickly becoming a poster child for turmoil linked to gentrification, a workforce adjusting to rapid tech gains and recent protests over racial discrimination.

“This whole initiative is about adversity, diversity and inclusion," said Margaret Gordon, co-director of the West Oakland Environmental Indicators Project — a grassroots environmental group started by local residents in one of Oakland's most polluted, and poorest, neighborhoods. "If you don’t have a stomach for those things, you shouldn’t be here.”

A city in transition

When it's not in the news for debates over neighborhood redevelopment and new condo proposals, Oakland has been making headlines for a resurgence in business activity catalyzed by the Bay Area’s current tech boom. 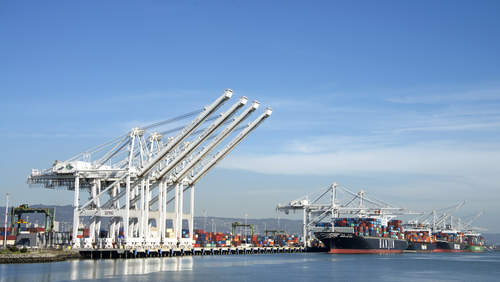 Shutterstock Sheila Fitzgerald
Oakland's most recognizable business hub: the Port of Oakland, which sees some 2.2 million cargo containers per year.
For these companies and other would-be tenants, the issue of resilience is largely one of stability; social and political unrest are bad for business, as are threats such as flooding linked to climate change.

For the City of Oakland, planning and service delivery centered on adaptability present a way to rebuild after huge budget shortfalls and some 1,000 job cuts in recent years. For residents, resilience is about protecting existing neighborhoods while also planning for future growth.

“The innovation economy should not just be something where most people are getting the wrong end of the stick and being pushed out of Oakland," said freshly-elected Mayor Libby Schaaf during a brief appearance at the resilience event last week. "An inclusive economy is a resilient economy."

Unemployment throughout the Bay Area has dipped with a surge in both high-paying tech jobs and low-paying service jobs as the region enjoys an economic upcycle. But the path forward in Oakland is clouded by a need for new mechanisms to make sure large swaths of the city's residents and infrastructure aren’t left behind.

Oakland’s $52,583 median income as of 2013 remains 16 percent lower than California’s $61,094 household median, and pencils out to slightly more than half of nearby Silicon Valley’s $93,500 median income. The U.S. Census Bureau reported that 20.5 percent of the city's population was living below the federal poverty line in 2013.

Much of the Resilient Oakland workshop centered on identifying and prioritizing the city’s most pressing challenges — a process that, in practice, is not dissimilar to the materiality push among corporate sustainability departments to identify their greatest environmental impacts and risk factors, as well as areas of opportunity.

Like many urban areas struggling with how to accommodate a surge in population and commercial activity after decades of disinvestment, the challenge for Oakland is balancing concerns about displacement and gentrification with the need for revenue to offset crumbling infrastructure, decreased city resources and accomodate future growth.

“The average score for all of our infrastructure is a D, and I know what all of you are thinking: ‘How did we get up to a D?’” said Daniel Hamilton, the City of Oakland’s sustainability program manager. Large-scale improvements, he added, are, “going to take citizen-led solutions."

Hamilton spoke as part of a series of presentations by subject matter experts on earthquakes, infrastructure, economic development, food, housing and technology, followed by breakout sessions for eight working groups of five to 10 people.

In my breakout group — which represented public agencies, community organizers, and the real estate, public health and environmental sectors — affordable housing and the capacity to re-house people in all income brackets after a disaster emerged as the No. 1 concern. 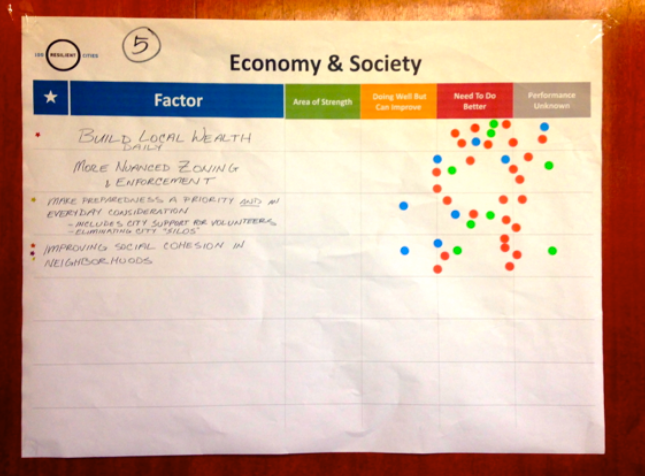 Although public funding sources are limited, Berkowitz said local funders in other cities have been drawn to 100 Resilient Cities projects "because of the consensus" engedered by the process — although Gordon and others expressed concern about the availability of funding for community groups and how much public input will be sought, particularly since the Oakland Climate Action Coalition is also already working in related fields.

At the macro level, data-driven smart cities technology, green building planning or retrofits and new funding models for renewable energy are all on the table.

“Ultimately, the things that make a city able to withstand shocks and stresses happen within the private sector,” Berkowitz said.

At the local level, one flash point in the discussion about how to physically build for a more resilient city is the Coliseum-area specific plan for redeveloping the city’s professional sports hub. The area is currently home to both the Oakland Athletics and the Golden State Warriors.

A final draft 20-year plan released in January calls for 4.7 million square feet of new office space, industrial facilities and science or technology uses, along with 4,000 (mostly market-rate) new housing units. While planners mention sea-level rise in a few paragraphs of the 211-page document, the most tangible plans for how to address the threat in the massive waterfront development area are to “design for livable, floodable areas along the shoreline” — not exactly comforting for potential property owners in the area.

Environmental risks also take on a unique dynamic in the Bay Area, where San Francisco, Berkeley and Oakland are all participating in 100 Resilient Cities, and all three have recently hired their first chief resilience officers.

Such coordination will have to overcome ingrained obstacles, because the cities involved repeatedly have failed to meet state housing mandates and struggled to provide shared public transit, such as the Bay Area Rapid Transit (BART) system.

“We are one of the only places on the planet to have three cities near each other included,” Salinas said, adding that “regional resilience” will be key to ensure access to shared “lifelines” like roads and other infrastructure.

Salinas said at the event that the process of prioritizing resilience imperatives alone is likely to take “several months." The goal from there is to foster "neighborhood-level" solutions that build on existing efforts.

"We’re not reinventing wheels,” she said.