Amidst all the chatter about safer, "greener" chemicals, what roll-up-the-sleeves steps must a company take to develop and bring these types of chemicals to market?

Undertaking an innovation project like this was an expensive, risky proposition.

It required a commitment to completing safety tests, clearing regulatory hurdles, pursuing third-party certifications and bringing production to commercial scale. In addition, Eastman dedicated itself to marketing the new solvent and providing hands-on technical support as customers learned how to use it in their formulations. Through the process, Eastman learned a great deal about how to navigate the challenges of bringing a new solvent to market for the cleaning industry.

Finding a novel molecule in a haystack

In the beginning, the Eastman team decided to focus its efforts in the cleaning products market. They chose this segment because formulators face constraints from regulatory changes, cost pressure and safety concerns.

Insights from the market revealed a need for a solvent that was both high-performing and safer for users and the environment. It was time for a cross-functional team at Eastman to get to work.

Suppliers need to know that everyone will give these products a fair evaluation with the understanding they will be different — but they will be better for people and the planet.

The team set selection criteria based on the solvent’s intended use. Any molecule that met the broad criteria was included in the universe of potential candidates.

Next, the team established performance and safety specifications, which ruled out a number of compounds. Still, the team had a daunting list of 2,400 "candidate solvents." Included on the list were all possible compounds of carbon, hydrogen and oxygen that, based on deduction, met the team’s criteria.

Narrowing the field through cutting edge screening tools and standards

To eliminate some of the 2,400 molecules from consideration, Eastman scientists used mathematical models to assess the suitability of the compounds.

For example, Eastman staff used an EPA tool that screens chemicals for their environmental release potential to narrow the list to 596 compounds.

The analysis considers whether a solvent has attributes that are of concern, in which case the solvent is not eligible for further screening. For molecules that are either insufficiently characterized or are of low concern, the EPA considers screening them. As the Eastman team evaluated which of the nearly 600 molecules were eligible for screening, the team shortened the list of candidates to about 70.

Among the 70, the team identified 20 molecules that Eastman could manufacture in a cost-efficient way. With that determination, it was time to synthesize and conduct full testing on the finalists.

The toxicology program’s goal was to identify a safer solvent for cleaning applications. In addition, the program needed to enable commercialization by generating the safety data that the team would need to secure regulatory approvals and third party certifications.

The team’s toxicologist set up a tiered testing strategy that involved evaluating physical and chemical properties, computer modeling (in silico) screening and "test tube" (in vitro) and living organism (in vivo) testing. The entire program relied on tools that sustainability advocates hold in high regard: the 12 Principles of Green Chemistry, Safer Choice Solvent Screen and various modeling programs.

The Tier 1 computer modeling assessed biodegradabililty and such concerns as mutagenicity, acute oral toxicity and reproductive toxicity. Molecules that cleared Tier I moved to Tier II where they underwent in vitro testing, including assessments of possible endocrine disruption Tier III in vivo tests assessed additional health and environmental endpoints.

After all the testing, a final candidate with an exceptional safety profile emerged.

The molecule showed no evidence of skin irritation, reproductive toxicity or genotoxicity (destruction of cells’ genetic material). In addition, testing revealed this molecule produced no evidence of acute toxicity for oral, skin or inhalation routes. It was also biodegradable and showed no potential to harm aquatic life.

The bottom line? Multi-tiered toxicology tests revealed the final candidate solvent was exceptionally safe. Even at doses up to practical limits, this solvent showed no toxicity. The lone finding of concern was eye irritation, which pertains only to 100 percent solvent. At typical formulation concentrations of 1 to 5 percent, the solvent was non-irritating.

The Eastman team knew they had a solvent that met the company's internal safety targets and was environmentally friendly. Next, they had to evaluate its cleaning power.

To isolate the chemical cleaning power of solvents, Eastman scientists modified a machine typically used in coatings labs, dubbed "the Scrubinator." The evidence was clear: the new solvent effectively removed organics at formulation levels of 0.5 percent and higher with fewer scrubs compared to common solvents. Because of the unique properties of the solvent, Eastman scientists discovered it’s most effective in neutral pH formulations. 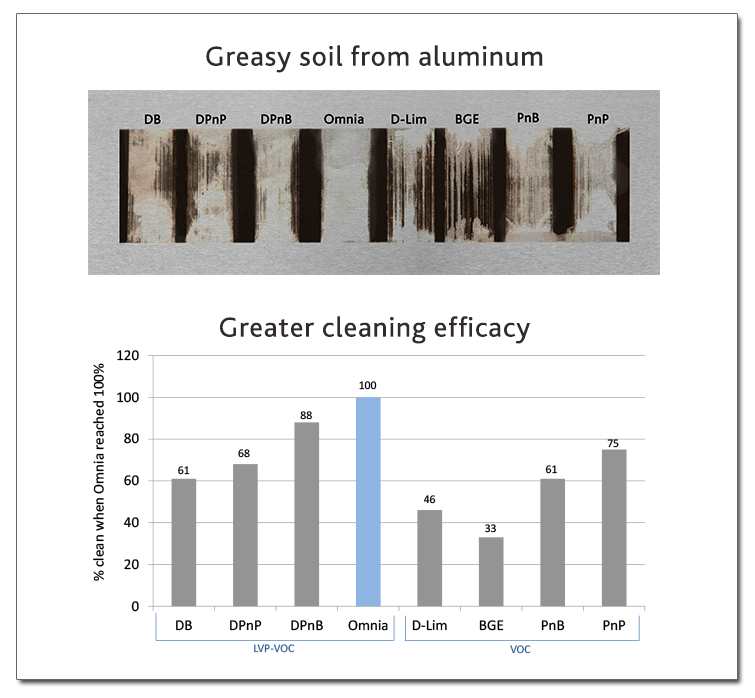 For the performance tests, the team checked how effectively the solvent removed various soils such as soap scum on a painted wall and greasy soil on an aluminum panel. The new solvent removed the soils completely with fewer scrubs compared to common solvents.

With proof that Eastman Omnia high-performance solvent offered a unique combination of performance, safety and value, the team embarked on market validation.

Nyco Products Company was Eastman’s first formulation partner, agreeing to use Omnia in new cleaning products. Thanks to Nyco, Eastman achieved validation of Omnia before the commercial launch. Through its collaboration with Eastman, Nyco introduced the OM1 Series of products consisting of a degreaser, multi-surface cleaner and bath and restroom cleaner, all powered by Omnia.

The challenges of marketing a new solvent

Even though Eastman had market validation from its work with Nyco, cleaning formulators were slow to adopt Omnia. Because they saw their existing formulations as "safe enough," they weren’t motivated to change for safety reasons.

There was also the matter of the industry’s lack of standard performance testing for cleaning products. As long as customers think existing products clean adequately, formulators have little incentive to reformulate for better performance. Without pull from distributors, end users and retailers, the cleaning market appeared reluctant to try a new ingredient.

Adding to the challenge was the fact that Omnia wasn’t a drop-in replacement. Many formulators were used to developing cleaners with high or low pH to ensure high performance. In contrast, Omnia required pH neutral formulations, which are much safer for the user, surfaces and the environment.

To showcase the value of a solvent that’s both high performing and safe, Eastman embarked on a journey with the industry to help educate and improve. The team leveraged media interviews, trade shows, value chain discussions and industry presentations to address concerns and make the case for using Omnia in cleaners.

When raw material suppliers make the commitment to develop safer chemicals, it’s extremely important for everyone in the value chain to support their efforts in order for this type of investment to continue. Given the high cost, time and risk associated with bringing safer ingredients to market, suppliers need to know that everyone will, at a minimum, give these products a fair evaluation with the understanding they will be different — but they will be better for people and the planet. We should not have to wait for governments to force change — we can be the change.

"Green chemistry" is struggling to get a foothold within the market. The primary takeaway is that all parts of the value chain must support and embrace safer ingredients for real change to occur. 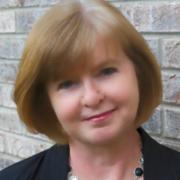 See all by Carol Perkins