One of the looming challenges of the shift to a sustainable economy, especially in the U.S., is how to simultaneously shift consumption patterns -- we are, of course, profoundly addicted to stuff, and especially new stuff.

In one of the many attempts to prove that sustainable consumption isn't an oxymoron, eBay has put its dedicated Green Team to work on a range of environmental initiatives, and has been trying to educate the world that buying used stuff is greener than buying new stuff.

Last month, the company rolled out a plan to get 100,000 reusable shipping boxes into the hands of its sellers, and to spread them far and wide. Before that, the company cut the ribbon on a shiny new highly efficient data center in Utah, and the company has also taken on an EDF Climate Corps fellow to help it find savings from green projects beyond the low-hanging fruit.

The newest project in the company's green evolution is being unveiled this morning, and it aims to make a dent in the mountain of unwanted, obsolete or broken electronics that get thrown away every year.

eBay's "Instant Sale" lets gadgeteers get an instant bid and near-instant sale on a number of electronics items, ranging from cell phones to tablet computers (if you've got an old iPad, here's where to sell it), and from GPS systems to camcorders.

By going to www.eBay.com/InstantSale, you can see what your old gear will fetch. You'll get a take-it-or-leave-it offer, and if you accept, then you will be able to print out a free shipping label to send the item in to eBay HQ, and about a week later you'll get paid.

I did two quick searches for gear that I'd love to get rid of: My shamefully affordable LG flip phone will get me $30 from eBay, and the nearly four-year-old MacBook laptop I'm writing this post on will fetch me a much more handsome $217. 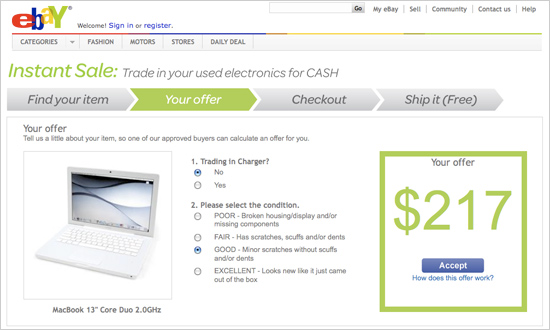 But those are certainly not representative examples of the kinds of gadgets that end up in landfills or shipped overseas to be melted down by hand to harvest metals. But if you've got a decade-old Nokia phone or that old GPS that was made obsolete by your iPhone, eBay will still take your gadgets back. Were my LG ENV2 phone to have broken from all the times I've wanted to drop-kick it in frustration, eBay will still pay me $3 for it.

eBay will work to find a home for functioning and only slightly out-of-date gadgets, and in other parts of the world resale and reuse of things like mobile phones are booming cottage industries: At the GreenBiz Innovation Forum on Tuesday, Indian entrepreneur Pawan Mehra said that handsets are reused seven times on average.

In a blog post from eBay's Green Team announcing the initiative, eBay cites "resellers like Tech For Less, Quick Ship Electronics, and Green Cells, [that] are finding ways to build successful businesses by reselling used and refurbished electronics."

Six months ago, at the same Innovation Expo that debuted the idea for the eBay Box, a team of employees beta tested a program that they called Resell, Re-use, Recycle; a program intended to help eBay users get rid of their old stuff in an environmentally responsible manner…and make money in the process.

Fast forward to this month, and those same employees -- and a few of their friends and colleagues here at eBay -- have created a smart collaboration with the eBay selling community called eBay Instant Sale: an evolved and ready-for-pilot version of that very same idea.

While eBay Instant Sale is certainly not the first of its kind to hit the internet, we are optimistic that eBay's marketplace -- which includes more than 90 million active users -- will bring the program to unprecedented scale. Our hope is for the program to not only bring electronics recycling to the mainstream, but put cash in the pockets of eBay buyers and sellers, and streamline the selling experience.

To be sure, some questions remain: Although eBay promises to "responsibly recycle" any gadgets that aren't resold, what are they doing to back up that claim? And what plans does the company have to expand its takeback efforts to some of the tougher types of e-waste to part with, like televisions and monitors?

But for the moment, eBay's Instant Sale seems like another big step forward for reducing e-waste. We're not yet to a point where we'll buy less stuff, but at least the company is making it easier to buy it used.