In the last few weeks, California passed a standard that will transition airport shuttle buses to zero-emission battery and fuel cell electric vehicles.

The shuttle bus standard covers an estimated 950 vehicles operating at 13 airports. Transitioning these buses to zero-emission technologies by 2035 will reduce (PDF) global warming emissions by an estimated 35,000 metric tonnes CO2e per year, the equivalent of taking 7,400 of today’s cars off the road each year. 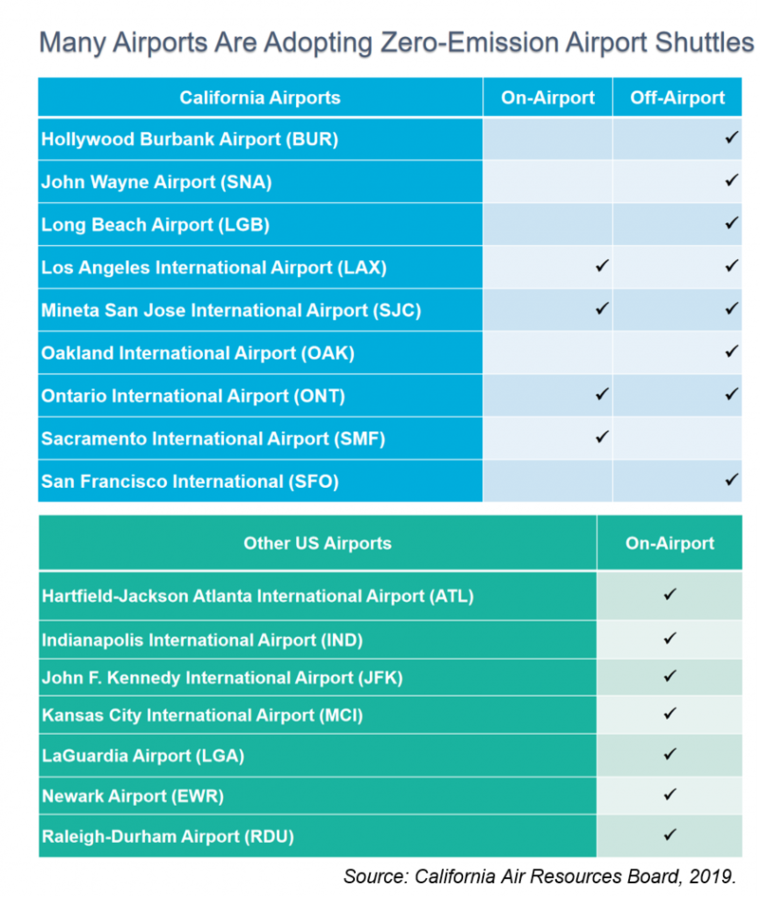 It may look like a small step in the right direction, but there are several reasons this policy — and others like it — can be big leaps.

First, if we’re to reduce carbon emissions and inequitable exposure to air pollution by electrifying as many or all of the vehicles on the road, we have to start somewhere and airport shuttles are well-suited to be an early adopter of electric technologies. In fact, the policy for airport shuttle buses is even stronger than the one in effect for transit buses, requiring every bus purchased beginning in 2023 to be zero-emission for airports. Compare that to 2029 for transit agencies.

Second, we usually don’t get big policy shifts without passing small policies first. The good news is that bigger policies — covering all categories of heavy-duty vehicles — are in the works. Even when bigger policies are in place, it often takes smaller policies to further strengthen them. 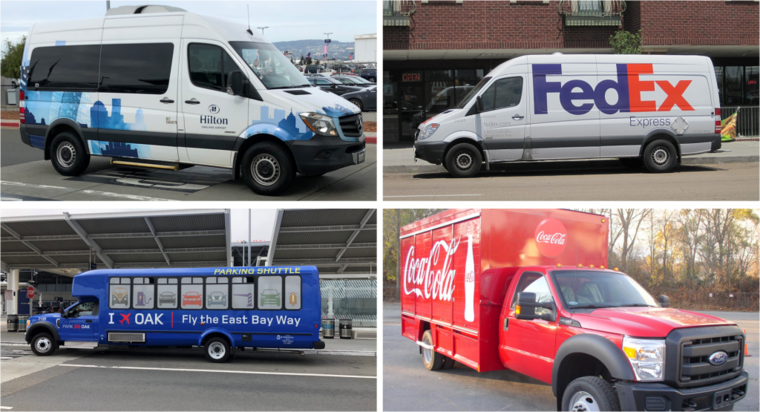 Third, shuttle buses have a lot in common with trucks. Just look at the two vehicles on the top. One carries passengers and the other carries packages, but otherwise they are the same vehicle.

The same goes for the shuttle bus and box truck on the bottom. They have the same business in the front, just different parties in the back.

What this means is that electrifying shuttle buses will increase the availability and market for all electric trucks.

Replacing just one diesel or natural gas bus with an electric vehicle has the same effect as eliminating the emissions from several cars. As mentioned above, this policy’s transition of 950 buses to electric technologies will have the same effect (from a global warming perspective) as taking 7,400 of today’s cars off the road each year.

The standard applies to both public and private airport shuttle buses, but only those with fixed routes less than 30 miles long. Types of vehicles falling under the standard include buses operating between airport terminals, rental car sites, off-site parking lots, or airport hotels. Door-to-door charter services, taxis and ridehails (Uber and Lyft) are not included in this policy.

Fleets must achieve the following percentages of zero-emission vehicles on the road by these dates:

With fuel and maintenance savings expected from electric vehicles compared to diesel, natural gas and gasoline, as well as decreases in vehicle purchase costs, the standard is estimated to save $30 million (PDF) across the state from 2020 to 2040.

Significant state funding is available to incentivize early action before 2023, providing savings above and beyond the estimated $30 million. California’s HVIP voucher program, for example, provides $25,000 to $160,000 in funding for the purchase of battery electric shuttle buses (depending on the vehicle size) to offset higher purchase costs.

This is just the beginning

No single policy will solve all of our air quality and climate problems, but progress is the sum of all things, airport shuttle buses included.

This story first appeared on:
Union of Concerned Scientists
Topics:

How can we get more electric trucks on the road?

Will California say bye to diesel-burning trucks and hello to zero-emissions ones?