Electric scooters on collision course with pedestrians and lawmakers

Electric scooters are appearing in many major cities across the country, bringing fun to riders, profits to scooter makers — and lots of potential risks to walkers and riders.

San Diego, where I live, is at the forefront of the proliferation of electric rideables, and as a physical activity researcher I am an interested observer. Recently, I was enjoying a stroll on the boardwalk when a couple of electric scooters zoomed past. As I saw a young girl start walking across the boardwalk, another scooter zipped by, and I could tell it would not be able to stop in time. The young woman riding the scooter was able to act quickly. Instead of crashing into the girl at full speed, she fell down with the scooter and slid to a stop. There was a crash and minor injuries to the rider, but a tragedy was avoided.

I consider this event a warning about the dangers posed by the electric vehicles that rapidly have become commonplace on local boardwalks and sidewalks. An online search will reveal many reports of injuries. A Dallas woman went to the emergency room for head injuries last month, and officials in Nashville are considering legislation there that would require registration for scooters.

Several issues emerge from this new mode of transportation, including whether riders should be required to wear helmets and whether the vehicles should be allowed on sidewalks. And should drivers be permitted to use them while under the influence? I want to warn local government leaders, electric-rideable companies and users of sidewalks about the three ways that electric scooters can harm health.

How electric rideables can harm health 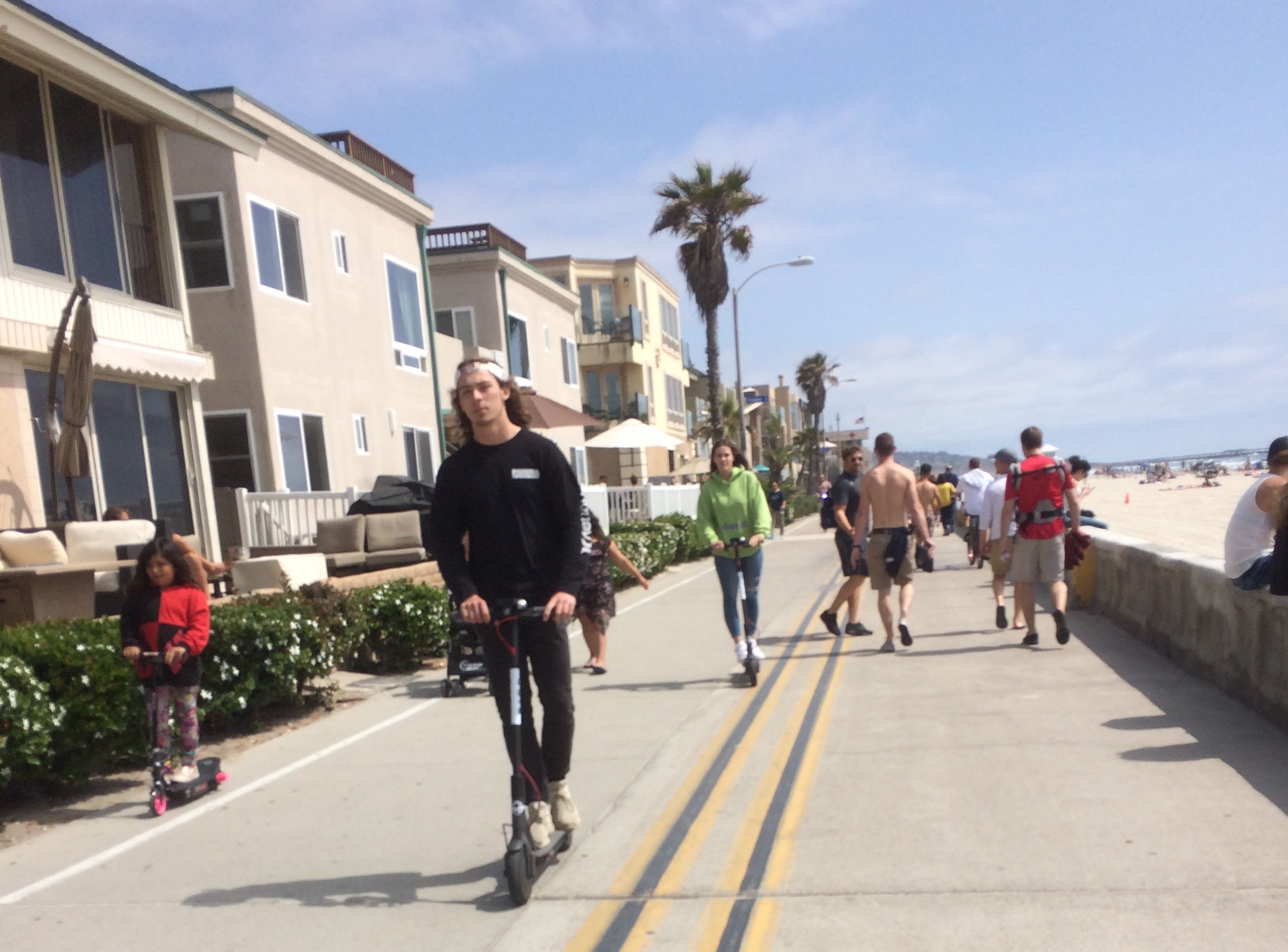 Have the rideables come to your neighborhood yet? They will. A market research company predicted electric scooters alone will grow from a $14 billion global market in 2014 to $37 billion in 2024. Bird and Lime, the two biggest scooter makers and both based in California, have placed scooters in nearly 30 U.S. cities in recent months, leasing them to riders seeking a thrill — or an alternative to ride-sharing.

A market research company predicted electric scooters alone will grow from a $14 billion global market in 2014 to $37 billion in 2024.

There are many variations of one-, two-, three- and four-wheeled vehicles that all share one major flaw: They all go too fast. Scooters go 15 mph, and electric skateboards, mini-motorcycles and one-wheeled devices can go faster.

The problem is that pedestrians walk 3-4 miles per hour, or slower. This means scooters are traveling four times as fast. If there is a clear path, the riders are going at full speed, because that is where the fun and thrills are. But considering the speed, weight of the devices and weight of the rider (sometimes two riders), the result is a dangerous force.

In a collision, the pedestrian will always be the loser. Putting these speeding motorized vehicles alongside pedestrians is a disaster waiting to happen. I could not find much data on injuries from electric rideables, but a study using the U.S. National Electronic Injury Surveillance System reported 26,854 injuries to children from hoverboards alone in 2015 and 2016.

A second way that electric rideables can harm health is by reducing walking. Ads for the devices claim they reduce car trips and carry public transit riders the first and last mile of trips.

But do they? I challenge the companies to provide evidence about this. Based on my observations, the devices mainly replace walking with riding. And it is well-documented that low physical activity is one of the biggest health threats worldwide, being a major contributor to epidemics of obesity, diabetes, heart disease, cancers, dementia, etc.

The third way electric rideables can harm health is by making sidewalks hostile territory for pedestrians. Although scooters and other rideables are not technically allowed on the sidewalks, almost all the rides I see are occurring on sidewalks. If speeding electric vehicles become common on sidewalks, then I predict pedestrians will stay away. Our research group based at University of California, San Diego has shown that the better sidewalks and street crossings are designed for pedestrian safety and comfort, the more people of all ages walk for transportation.

Thus, I am concerned that competing with electric vehicles will make sidewalks less safe and comfortable for pedestrians. The U.S. already has among the lowest rates of walking and bicycling for transportation in the world. Will we now turn over the sidewalks to electric vehicles and further reduce our activity levels?

Walking is already too dangerous. About 6,000 pedestrians were killed in 2017. The Governors Highway Safety Association reported that the number of pedestrian fatalities increased 27 percent (PDF) from 2007 to 2016, while at the same time, all other traffic deaths decreased by 14 percent. Clearly, the roads are not safe for pedestrians. Shouldn’t we protect sidewalks as a safe place for walking?

A quick fix: Slow things down 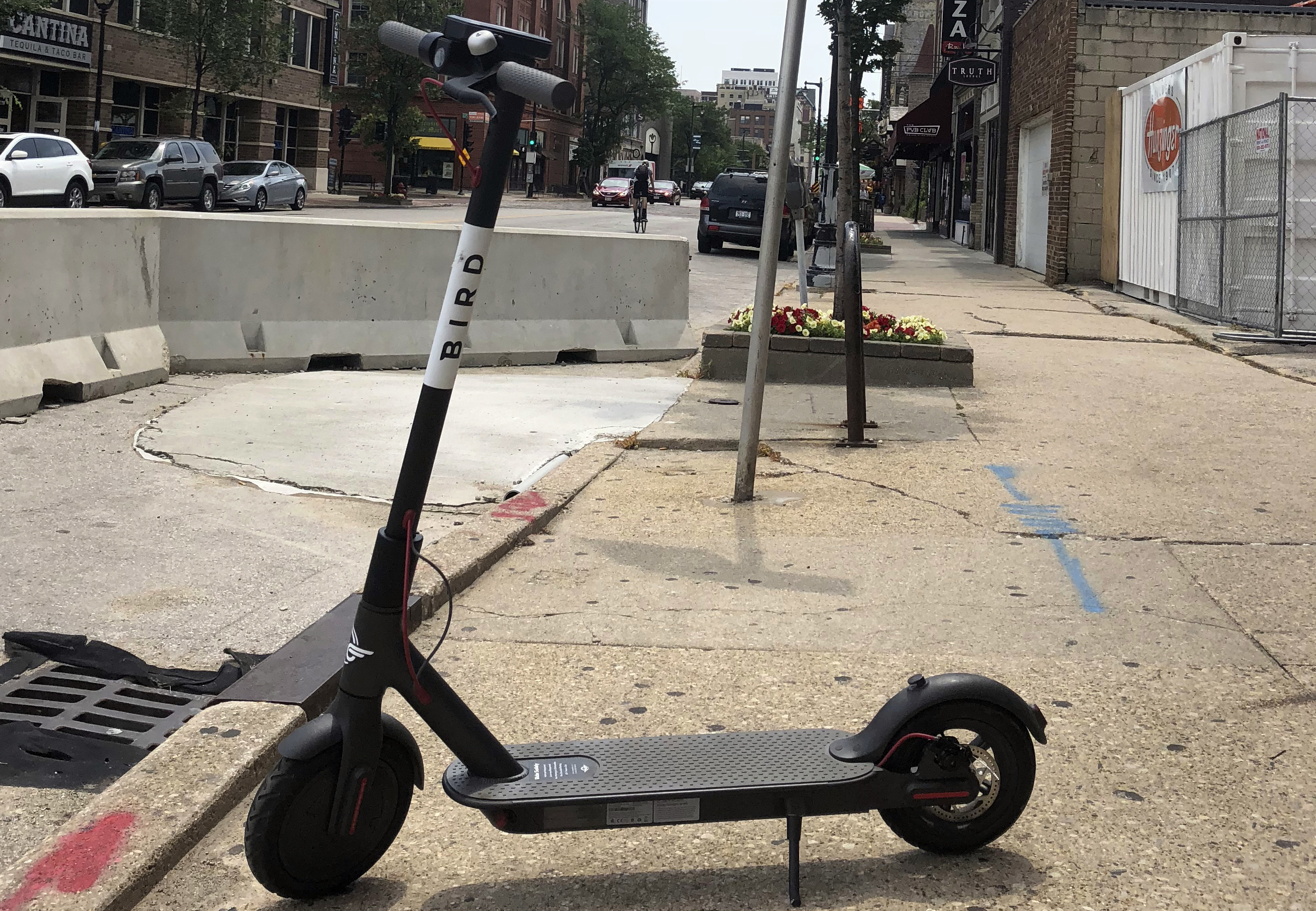 If it seems like scooters are everywhere, it’s because they are springing up in cities, such as seen here July 12 in Milwaukee, across the country. Carrie Antifinger/AP Photo

Local governments are actively working on responses to this obvious new danger. The first step in San Diego has been to enforce requirements for helmets, speed and single riders on the boardwalk. I have seen no such enforcement on sidewalks just a couple of blocks away. This infographic with safety instructions for electric rideable use is a good start to education for riders.

I have some further recommendations that will support safe use of electric rideables while improving conditions for walking and bicycling.

Electric rideables should be allowed wherever bicycles are legal, which are bike facilities, lanes, protected bike paths and on the streets, but not on sidewalks. But there’s a problem with bikes and rideables on the streets — riding on the streets is not as safe as it could be on bicycles or rideables.

I envision a win-win scenario in which electric vehicle companies and bicycle advocates join together to advocate for rapidly building networks of protected bicycle facilities that also can be used by rideables. Most U.S. cities are market values of more than $1 billion, so they have the capacity to lobby cities for infrastructure that will safely accommodate their products.

I expect bicycle, pedestrian, health and environmental advocates would be happy to work with electric rideable companies to achieve long-sought goals for safe bicycling that are likely to produce more bicycling, less traffic congestion, fewer carbon emissions and healthier people.

The limits of data-driven approaches to planning

Cities must repave the 'last mile' of public transit

What it will take for micromobility to have real, sustained impact