Elements – and minerals – of power in our Internet economy

This is an excerpt from The Elements of Power: Gadgets, Guns and the Struggle for a Sustainable Future in the Rare Metal Age by David S. Abraham.

In 1970, yellow legal pads, typewriters, double-stacked in- and out-boxes covered desktops, not icons. Although computers had yet to make their appearance on the average desk, a resource change was coming. Centronics introduced the dot matrix printer, Intel began selling microchips, and programmers had just sent the first e-mail message on ARPANET, the roots of today’s Internet.

A few years later, George Pake, who headed Xerox Corporation’s Research Center, predicted that by 1995, TVs attached to keyboards on office desks would strike the death knell for paper. "I’ll be able to call up documents from my files on the screen, or by pressing a button," he said. "I can get my mail or any messages. I don’t know how much hard copy [printed paper] I’ll want." As it turns out, he’d want much more.

Despite all the high-tech gadgets that appear to negate the need for paper, paper use in America has nearly doubled since Pake’s days. We now consume more paper than ever: 400 million tons globally and growing. That’s roughly two pounds of paper per office worker every day. Technological advances often come with the promise of using fewer materials, but the reality is that they have historically driven more materials use and made us reliant on more natural resources.

The world now consumes far more "stuff" than it ever has. We use 34 times more construction minerals such as stone and cement and 27 times more ore and industrial minerals, such as gold, copper and rare metals, than we did just over a century ago. We also each individually use more resources. A person today consumes more than 10 times the amount of minerals than one did at the turn of the 20th century.

Lost in the increased volume of resource use is a hidden, but profound shift in the content of resource use. The products of today are fundamentally different from those of just 15 years ago. They rely on an entire new set of specialty metals in nearly all of our high tech and green wizardry.

These metals create brilliant colors on our smartphone screens, powerful batteries in our hybrids and more energy-efficient air-conditioners.

These metals create brilliant colors on our smartphone screens, powerful batteries in our hybrids and more energy-efficient air-conditioners. They each perform a very specific role, so much so that the smartphone itself contains half the elements known to man, from the indium that serves as a transparent conductor to let the phone respond to your finger to the neodymium that helps create crystal clear sounds.

This change in resource demand is not just because of new products but a change in the make-up of the products we use daily. The standard lightbulb just 15 years back relied on a single metal filament. Today’s LEDs have resource demands more akin to a computer than its predecessor and rely on a slew of specialty metals that fill critical roles in providing the right hue of light.

Some perspective is in order. In the 1980s, Americans huddled around a TV, maybe an Atari game system. Today entertainment flat-panel systems are hooked up to DVRs, speakers and game systems replete with cameras and motion sensors. And at the same time, many of our products from the toothbrush to our cars became electronified, demanding specialty metals to power them. And with those advances, our use of these new metals took off. Since 1980, mining companies have produced four times the amount of many, if not all, rare metals compared to the amount they produced from the beginning of time until 1980. We are now in a new resource era, the Rare Metal Age.

The challenge to seeing this revolution in our resource use is that these metals buried beneath the plastic shell of most electronics. What’s more the recent fall in commodity prices and in demand for headline metals, such as copper and zinc, due to a fall in infrastructure development, has masked an emerging trend for specialty metals.

Many analysts argue that the commodities supercycle, a period where demand for commodities rose to fill the demand for buildings, bridges and railways, has ended because China and many other countries aren’t aggressively building new infrastructure projects. While demand for those resources has currently ebbed, the demand dynamics are such that a new age has arisen. We now are using more rare metals, more quickly because of new demand dynamics that factor faster growth in gadgets over traditional infrastructure.

We are now on a global trajectory to toss out over a billion computers annually. This is not just because we have more of these devices but because we use them so briefly. The average lifecycle of a smartphone is about 21 months. Likewise, laptops, tablets and many of our high-tech gadgets have life spans of less than three years. This is not because the product is useless when we junk it but because its obsolescence, in many cases, is by design.

iFixit, a site dedicated to repairing those irreparable high-tech gadgets, notes, "Apple is making billions by selling us hardware with a built-in death clock," referring to a built-in battery that iFixit believes starts to lose power just as the warranty ends. Because of "advances" such as this, product life cycles are now measured in months, not years, meaning we are churning through resources more quickly. According to a Japanese industry study, in the 1970s the average commodity had a life cycle of five years and about 80 percent of all the materials in them had a life cycle of at least three years.

Just after the turn of the millennium, that dynamic nearly flipped. Twenty percent of all commodities were discarded in one year, and half in less than two years. This is in part because consumers find it far easier to buy many high-tech goods because by comparison they are cheaper. Since the early 1980s, the consumer price of a television and other video equipment fell by more than 90 percent.

New technologies now can proliferate so quickly; look back at the smartphone. In just four years after its introduction, 6 percent of the world population owned one, making such phones, by some metrics, the fastest growing technology ever. A few years later, the tablet accomplished the same feat in half the time and now nearly half of all Americans own one. This rate of technological penetration is the new norm and it drives up rare metal use.

But a new stage in the Rare Metal Age is set to even push demand higher: when the infrastructure that underpins our modern lives becomes high-tech — fleets of electric buses, roads built out of solar panels or elevators that rely on magnets instead of cables. New innovations include not only new products but also existing technologies used in new ways. Imagine the interior walls of a bedroom lined with flat panels that change color to adjust your mood. Or bathroom "mirrors" that display your body’s vital signs gathered from sensors and cameras around the house.

General Electric foresees a kitchen designed around a hub with a cooking surface that uses voice, motion and facial recognition to help you share your culinary creations with others via the Internet.

Cisco, the American network equipment company, reports that in 2010 over 12.5 billion devices were connected to the Internet. That number will quadruple by 2020 to 50 billion. Interconnectivity will drive this new rare metal demand dynamic. At the same time that the wealthy world is using more rare metals, the speed at which developing countries are playing technological catch-up is unprecedented. For example, in 1995, only 7 percent of Chinese city dwellers owned refrigerators; 12 years later, 95 percent of them did.

The U.S. government’s National Intelligence Council predicts that the global middle class may nearly triple over the next two decades, adding roughly 2 billion more people. "Such an explosion will mean a scramble for raw materials and manufactured goods," a 2012 Council report stated. Add to this our global quest to find green energy alternatives, and the demand for rare metals will soar. The Japan Institute of Metals, meanwhile, reports that demand for rare metals such as cobalt, tungsten and lithium will increase by a factor of five by 2050, and will outpace our current reserves for many of them.

The coming resource crunch raises the likelihood that resource-rich countries will use their own increasingly valuable resources to gain strategic and economic advantage.

The coming resource crunch raises the likelihood that resource-rich countries will use their own increasingly valuable resources to gain strategic and economic advantage. This portends tense showdowns between individual companies and countries as these countries continue to tighten their control over the metals, or worse, cut rare metal trade again.

All this resource use scares Roger Agnelli, former president and CEO of the mining giant Vale. As he told me in 2013, "The reality is the planet is very small for the number of inhabitants we will see in 2025. As technology is getting cheaper, resource demands are increasing and we are facing changes in geopolitics. This is real."

And yet, I would argue, the answer to our concerns about rare metals is not to shy away from using them because of our geopolitical supply fears. Rather it is to search for more sources, use them more efficiently and advance our knowledge of geology, metallurgy and material science as well as establish efficient recycling systems.

We need to turn rare metals into commodities — we should strive to make them cheaper, more abundant and produced with the least environmental impact. That means international efforts are critical, including development, understanding and improvement of material development and flows; investing in education regarding the use and conservation of resources; and adjusting regulations to better govern the start-up of new mining operations. 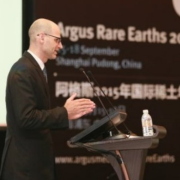 See all by David S. Abraham