Green renovations and retrofits will save the Empire State Building more than $4.4 million annually, reduce energy use by 38 percent, cut carbon emissions by 105,000 metric tons over a 15-year period and provide a payback in slightly more than three years.

The statistics on the greening of the Empire State Building are almost as dizzying as the 102-story New York City landmark. And the lessons that can be learned from the efforts by the project partners -- building owner Anthony Malkin, Johnson Controls Inc., Jones Lang LaSalle, the Rocky Mountain Institute and the Clinton Climate Initiative -- are numerous as well.

Clay Nesler, the vice president of Global Energy and Sustainability for the Building Efficiency business of Johnson Controls Inc., detailed learning points in a "One Great Idea" session at the State of Green Business Forum in San Francisco today.

"The great idea is actually a combination of a bunch of really, really good ideas," Nesler said. They included:

"We're also investing a lot in measurement and verification," he said, adding that all the energy data is being shared publicly. "Tony Malkin made us agree to publish all calculations for 15 years and guarantee performance for 15 years."

The steps taken with the Empire State Building reflect Malkin's business acumen and his interest in sustainability, according to Nesler. "Tony Malkin is a great businessman and he's also a great friend of the planet," Nesler said. 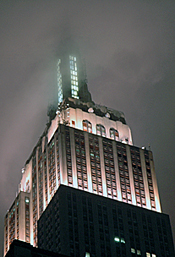 Nesler urged companies that own buildings and those that lease space to take advantage of the lessons learned by the Empire State Building project team.

In an appeal to building owners, Nesler said, "please, please look to doing a deep retrofit ... if you're doing a major renovation or building a new building go for the whole meal." He called upon leasers to "look for a green building, get the kind of lease where you pay your own energy bills and, please, please fit out that space so that you get the payback based on the terms of the lease. Put in meters."

Nesler also urged building owners and leasers to share their energy data with employees and tenants. A white paper, case study, the energy services performance contract and other resources about the retrofit of the Empire State Building are available at: www.esbnyc.com/sustainability_energy_efficiency.asp