Is employee activism on sustainability nearing a tipping point?

A new survey shows that nearly two-thirds of those who work for large U.S. corporations want their employers to actively take on environmental and social issues. Full stop.

The results will be publicly released later next month, but Povaddo shared with me some of the survey’s early findings.

For example, pollsters presented respondents with a list of 23 social and environmental issues (see accompanying table) and asked, "Would you like to see your employer use its influence to take a public stand and/or be more vocal on any of the following issues?" Among the responses, renewable energy (65 percent answering yes) and climate change (52 percent) outpolled immigration, gun control, foreign policy and other issues. "Clean air, water and open spaces" (69 percent) outpolled all of those issues. It even showed up stronger than "improving public education" (67 percent). 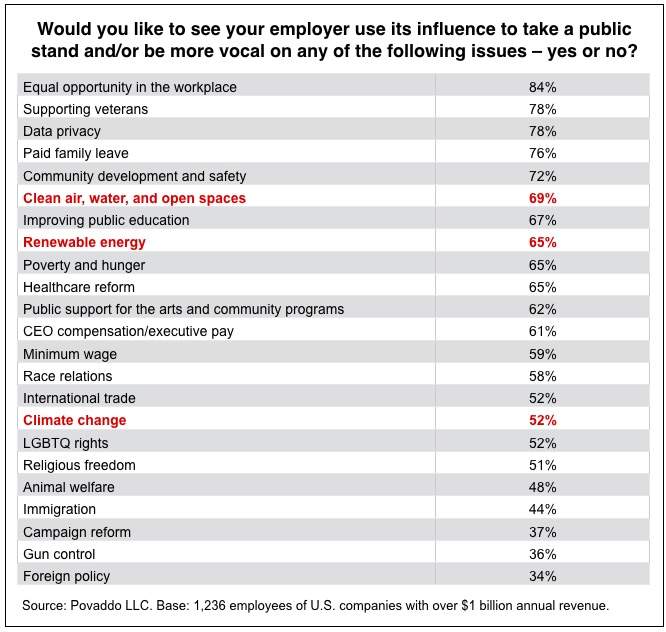 The survey, which focused on employees of U.S. companies with $1 billion or more in annual revenue and has a 2.79 percent margin of error, had its genesis in the wake of the U.S. presidential election. Povaddo set out to explore various aspects of social activism, the degree to which employees expect their CEO to be vocal and the implications for companies and employees.

"We started putting this survey together around the time of the Super Bowl, when the big issue was immigration ads," William Stewart, Povaddo’s founder and president, told me. "And that was really the nexus of this question — thinking about all the different issues that companies were starting to get involved within the new Trump administration."

CEOs have been hit for taking a stand or not taking a stand with a variety of different stakeholder groups, but no one has looked at how employees view this.

"CEOs have been hit for taking a stand or not taking a stand with a variety of different stakeholder groups, but no one has looked at how employees view this," said Tony Calandro, Povaddo’s senior vice president for social impact. "We really wanted to take a look to see where they stand on their CEO, and would they like CEOs to be more socially active and use their influence to impact these issues. The data says they do."

"I don’t believe that a lot of these questions have ever been asked of corporate America’s workforce," added Stewart. 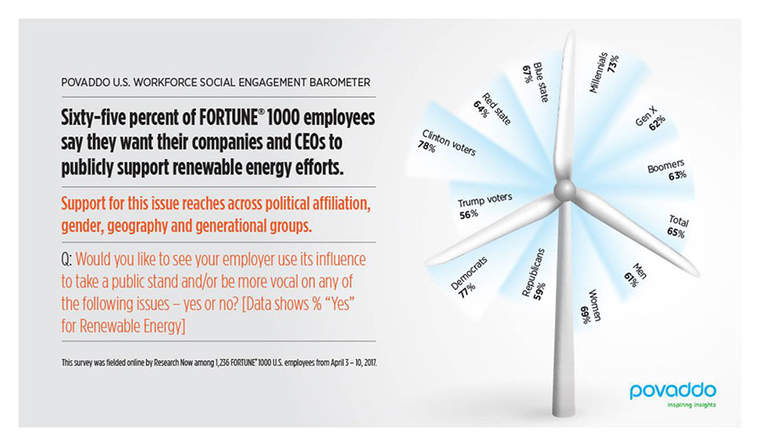 Some responses were surprising — for example, the 21-point gap between renewable energy and immigration. Given the latter topic’s presence in daily headlines and talk shows, one might reasonably assume that immigration would be of keen interest to corporate America’s workforce. Instead, it ranked 20th out of 23 issues.

Says Stewart: "It tells a company, ‘You better understand that the stakes are a lot higher in terms of really understanding your workforce.' You’re going into an issue where you really have majority support, as opposed to immigration, where you have split attitudes."

Stewart was also surprised by the message employees seem to be sending about companies’ overall engagement with social and environmental issues. In one "split-sample" question, where half of those surveyed were asked one question while the other half were asked a different one, employees appear to have more allegiance to companies engaged in these issues.

You better understand that the stakes are a lot higher in terms of really understanding your workforce.

The full study will be released in late May. "The rest of the data is about trying to understand the implications for companies," said Stewart. "What does it mean for employee engagement, retention and other issues? That’s where we’re going through the data in a rigorous way."

For now, Stewart said he wanted to share some early results to seize the moment — Trump’s 100th day in office, this weekend’s People’s Climate March "and the general chatter and fear in the community right now" about the shifting political winds on environment and energy issues.

At work, do women care more than men about sustainability?

The State of Green Business 2009: Green Moves Up, and Down, the Chain of Command