One tell-tale sign for Navy Assistant Secretary Dennis McGinn that renewable energy might have a really big role to play in the future of U.S. national security was a small-scale solar experiment in Afghanistan.

Back in 2011, the India Company from the third battalion of the fifth regiment of the Marine Corps headed to the Sangin District in the Southern portion of the war-torn Middle Eastern country with a range of unconventional supplies, such as solar panels and LED lights.

"The direction from the commodore was, 'Hey, look, if you guys find this useful, great,'" said McGinn, who oversees the Navy's Energy, Installations and Environment division, at the VERGE Hawaii conference in Honolulu on Tuesday. "They did find it useful, to the extent it cut down the diesel generator loads at forward operating base by 60 percent."

Instead, McGinnis explained, safety and resilience in dangerous situations are top of mind. He pointed to one instance when a forward operating base came under rocket-propelled grenade attack, solar panels providing power kept the lights on despite being hit with shrapnel.

If it’s good enough for the United States Marine Corps... what the heck is wrong with the rest of us?

"The solar panels took a licking and kept on ticking," McGinn half-joked before taking a more introspective tack. "If it’s good enough for the United States Marine Corps at a forward operating position, what the heck is wrong with the rest of us?"

Solar in Sangin is one example of the growing number of ways disparate branches of the military are looking to increase the resilience of energy infrastructure — both at home and abroad — in the face of increased risks of physical disruptions, like extreme weather made more likely with increasing average temperatures, as well as cybersecurity or terrorism threats.

In the meantime, states and cities throughout the U.S. are embarking on their own renewable energy efforts, raising the question of how the armed forces might work with civil society to ramp up clean power deployments. Also on Tuesday, McGinn took part in signing a Memorandum of Understanding with Hawaii Governor David Ige, which the pair said will help align the two entities and marshal new resources for energy efficiency and renewable power installations.

In addition to potential funding and pilot opportunities for emerging technologies, states like Hawaii with ambitious clean energy targets say that the backing of the military provides symbolic benefits and could help bolster related markets.

“The fact that the Navy and the Department of Defense shares our goals and is a partner in achieving them truly does amplify our efforts," Ige said. "Putting it in a more formal structure really allows us to amplify and create more synergy between the actives of the Navy and the state of Hawaii."

The ties between Hawaii and the military may be most associated with the infamous history of Pearl Harbor, but economics also bind the two.

For starters, the Army, Navy, Marines and Air Force employed more than 46,700 people in Hawaii as of September 2015, according to the Department of Defense's personnel agency. In addition to being one of state's biggest employers, the military also happens to be the state's single biggest energy user — as is true for the rest of the country.

“The [Department of Defense] in aggregate uses about 2 percent of all U.S. energy," McGinn said. "That makes us the largest single organization interns of energy consumption.” 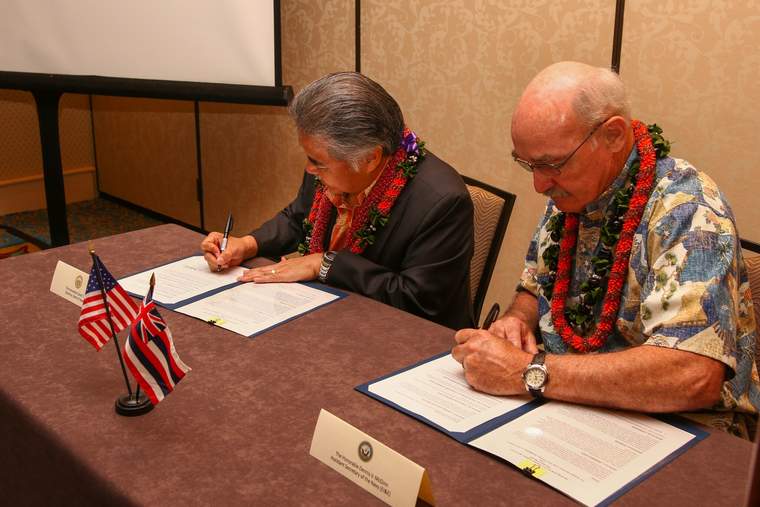 Kathryn Cooper
<p>Hawaii Governor David Ige and Navy Assistant Secretary Dennis McGinn sign a clean energy memorandum of understanding on Tuesday in Honolulu.</p>
What makes Hawaii unique, in addition to an island geography that necessitates reliance on costly oil imports, is the state's plan to transition to a 100 percent renewable portfolio standard by 2045. In other words, the state aims to cut fossil fuel dependence by mandating that power utilities transition to 100 percent net electricity sales within three decades.

The Navy, meanwhile, is aiming to power 50 percent of its operations with "alternative sources" of energy by 2020.

“We recognize that energy security, economic security and environmental security are all inextricably linked," McGinn said. "You have to think about them all at the same time. They are the under-girding, if you will, of our national security.”

While the military focues heavily on resilience and security, the appeal of renewables for Hawaii is part financial, given that the state currently spends more than $5 billion per year on oil. Building to withstand hurricanes and other risks is another imperative that dovetails with the military's resilience objectives.

It's not just the Navy keeping a close eye on Hawaii and the next frontier in clean energy.

U.S. Air Force Assistant Secretary Miranda Ballentine, who previously oversaw global renewable energy for Walmart, said that the airborne wing of the military is looking to drastically reduce the $9 billion-a-year spent on energy — about 80 percent of which directly funds jet fuel.

“The threat environment really has changed quite dramatic in about the last five years," Ballentine said. "No longer are we just talking about outages due to storms or weather events — which are also increasing, by the way."

In addition to military offices focused on energy, like the Air Force Office of Energy Assurance or the Army's Office of Energy Initiatives, there is also support of emerging technologies to consider.

While broad technology R&D efforts like DARPA and ARPA-E are somewhat widely known, branches of the military are also wading into tech investing and market building.

The 10-year-old company that has amassed more than $22 million in venture capital and debt financing straddles the worlds of the Internet of Things and next-gen energy technologies by connecting "energy things" like generation sources, storage and third party analytics or other services.

“We do see Hawaii as being a great place to learn because they have some very unique energy challenges that I think stateside we’ll have in five or 10 years,” Reichel said.

In addition to funding of up to $1 million to aid in tech demonstrations, the Excelerator facilitates potential military or other projects. Blue Pillar is currently negotiating a project in Hawaii that Reichel hopes will come online by mid-2017, he said.

Other technologies that Ballentine and McGinn would like to see entrepreneurs pitching? Off-the-shelf microgrids and storage technology, either battery or geothermal, that could buoy distributed systems such as microgrids.

Gov. Ige of Hawaii underscored the much-discussed sentiment that energy storage breakthroughs could change the game, should costs come down and reliability continue to increase.

“The challenge is about storage, and getting storage to be economical and consistent,” Ige said.

Episode 35: Aloha from the future of clean energy

What the DoD is doing to accelerate energy resilience and security

What the DoD is doing to accelerate energy resilience and security