The energy transition is coming on fast, but not fast enough

This is just one key takeaway from two new reports that forecast a fast and furious energy transition that still falls significantly short of the target agreed upon in Paris nearly four years ago — limit the increase in global average temperature to well below 2 degrees Celsius (3.6 degrees Fahrenheit) over preindustrial levels.

Citing various inflection points expected in years rather than decades, the reports include plenty of good news on the clean energy and transportation front, while at the same time each one offers its particular warning to the politicians, corporate executives and investors converging on New York for the United Nations Climate Action Summit.

In its third annual Energy Transition Outlook, DNV GL Energy forecasts the rapid expansion of solar and wind energy and electronic vehicles, largely driven by cost, but warns that without a massive policy response — on CCS, among other things — the transition will be too slow to avoid dangerous global heating. (To do that, we’d have to hold warming to 1.5 C, which is why the Paris Agreement set 1.5 C as the ultimate target.)

"By the mid-2020s, the cost of producing an electric vehicle will be the same as the cost of producing a combustion engine," Ditlev Engel, CEO of DNV GL Energy, an independent energy consultant headquartered in Norway, told GreenBiz. "So that’s a tipping point, and when that happens, we expect there will be a massive uptake of EVs."

By 2032, DNV predicts, half of the passenger vehicles sold worldwide will be EVs.

We want to tell people who are in the energy business … the world is electrifying at an unprecedented speed. It will be driven by wind and solar, and it will happen because of the cost.

Meanwhile, the Forecast Policy Scenario (FPS), a report commissioned by the U.N.-supported Principals of Responsible Investment (PRI), says a massive policy response actually will happen — by 2025. But because governments have delayed meaningful action for so long, it will be "forceful, abrupt and disorderly," creating considerably greater disruption than many investors and businesses are prepared for.

Produced by London-based economics consultancy Vivid Economics and energy research firm Energy Transition Advisers, the FPS is based on analysis of the energy markets and government policy, while DNV analyzed technological advances and cost.

Because they use different methodologies, their timelines don’t sync up on specifics. For example, the FPS has solar and wind generating roughly half of all electricity in 2030, while DNV’s outlook marks that milestone roughly a decade later.

Unfortunately, although they looked at the energy transition through different lenses, they reach the same big-picture conclusion about meeting the Paris Agreement target, and both cite the limited deployment of carbon capture and storage (CCS) technology as one of the main reasons.

"CCS has been very slow to develop," Jason Eis, executive director of Vivid Economics, told GreenBiz. "While it’s become more and more proven, it’s still very costly to do." Hastening its large-scale use would take significant government intervention and support, which doesn’t seem likely, he said.

DNV views industrial-scale CCS as one of three policy objectives necessary to avoid dangerous warming, along with higher energy efficiency and even faster deployment of renewables, but likewise believes the cost will keep governments from making it a priority.

The Carbon Capture & Storage Association (CCSA) has estimated that CCS projects in the power sector would cost between roughly $70-$100 per ton.

The Trump administration wants to use CCS as a tool to prop up the coal industry, and last week the Department of Energy’s Office of Fossil Energy announced roughly $110 million in funding for a variety of CCS projects.

Carbon capture, use and storage "technologies are vital to ensuring the United States can continue to safely use our vast fossil energy resources, and we are proud to be a global leader in this field," Secretary of Energy Rick Perry said in a statement. 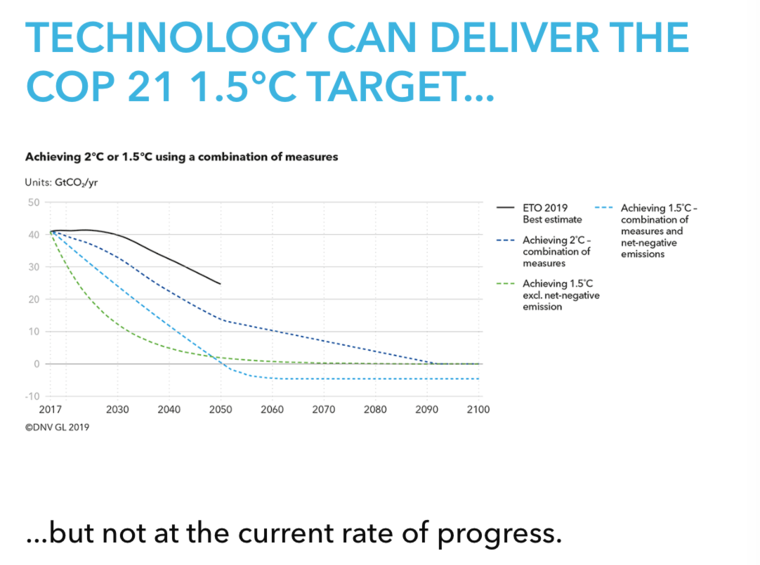 Outside of the fossil fuel industry and Trump administration, few view CCS this way, although its association with extending the use of oil and coal has made some environmentalists wary of the technology. Rather than seeing it as a threat to the transition to clean energy, U.N. Intergovernmental Panel on Climate Change and the scientific community take the same view as the two new reports on its importance.

Moreover, if you add on the price of capturing 90 percent of a coal-fired power plant’s CO2 emissions, the cost would increase by about 30-60 percent or more. And the falling costs of wind and solar already have made these technologies cheaper than coal in most of the country, a trend that’s widely expected to continue, here and around the globe.

"We want to tell people who are in the energy business … the world is electrifying at an unprecedented speed," Engel said. "It will be driven by wind and solar, and it will happen because of the cost."

While a vast WWII-type effort on behalf of CCS seems unlikely, the PRI’s Forecast Policy Scenario does predict government actions such as bans on vehicles powered by internal combustion engines.

Demand for governments to act will grow from all angles, fueled by fears over national security, enabled by cheaper low carbon solutions and thrust on to electoral agendas by public protests.

With the report, the PRI aims to deliver a reality-check to investors who assume governments will take limited action on climate change, it says, and challenge the financial markets’ reliance on outlooks such as the International Energy Agency’s New Policy Scenario. This scenario, the PRI argues, looks only at climate policy that already has been announced, which would result in catastrophic warming, with global average temperatures increasing by 2.7 C to 3.5 C by 2100.

"As the realities of climate change become increasingly visible, the demand for governments to act will grow from all angles, fueled by fears over national security, enabled by cheaper low carbon solutions and thrust on to electoral agendas by public protests," Fiona Reynolds, chief executive of the PRI, said in a statement. "More than at any point, these triggers are aligning actors in a common direction, making some form of policy response inevitable."

FPS forecasts rapid global emissions reductions, with declines of 60 percent from 2020 to 2050, which put the world on a path towards 2 C but not 1.5 C. In addition to limited deployment of CCS, the report cites a lack of meaningful, co-ordinated climate policy much before 2025, and the continued increase in global consumption of greenhouse gas-intensive meats, especially beef, despite a shift in diets towards chicken and plant-based options.

DNV, meanwhile, forecasts that we will exhaust the 1.5-degree carbon budget in 2028, and the 2-degree budget in 2049, with still-significant emissions by mid-century.

"Our model shows us getting to a 2.4-degree-centigrade world from technological improvement or cost improvement, and then the politicians would need to find one centigrade in terms of regulation to keep warming at 1.5," Engel said, adding that the experts who did the modeling had expected to find that the energy transition they forecast would be enough to reach the Paris Agreement objective.

"We were somewhat depressed when we saw that it’s still not enough," he said.

Why We Need CCS -- at Any Cost

How to Jumpstart Carbon Capture and Storage

The Search for Clean Coal