With the Internet of Things projected to become a $19 trillion industry by 2020, the tech trend with big implications for sustainability fields from building efficiency to mobility has quickly become a familiar concept.

Iconic companies such as Cisco, GE, IBM and HP have all made the Internet of Things an integral part of their new business offerings. Startups in the space (think Google-owned smart thermostat maker Nest) have also already made a real impact in the market.

When it comes to how connectivity and new sources of data could impact sustainability, enterprise technology giants like Siemens are already jumping into conncected buildings and energy management systems. Mobility companies from Ford Motor Co. to upstarts like Veniam are experimenting with connected cars and "Internet of Moving Things" devices designed to increase efficiency and curb emissions.

And then there's Silicon Valley startup Enlighted Inc., which is trying to utilize this emerging technology to save businesses serious money on their commercial real estate holdings.

The company both retrofits old fluorescent lights with new LED lights, then installs wireless sensors to gather data behind the lights. It's a promising field for sustainability and budget wonks alike, but it's still difficult to nail down the scope of the market.

“We still don’t know the value of all these high-value applications yet," Enlighted CEO Joe Costello told GreenBiz. "It’s still too far out there for people. It’s not tangible enough. It’s not real enough.”

Costello described the company's products and financing model in a GreenBiz Group webcast held Tuesday (which was also sponsored by Enlighted) on disruptive financing related to the Internet of Things and commercial real estate.

Enlighted so far has received $55 million in funding from five investors including Draper Nexus Ventures, Intel Capital, and Rockport Capital, according to CrunchBase. Most recently, the company received $20 million in Series D funding in 2014.

With immediate and tangible savings on the balance sheet, smart lighting as a whole has seen a sharp rise in sales. According to Navigant Research, sales for smart lighting will nearly double between the years 2013 and 2018 with projections reaching $2.3 billion in 2018.

The sensors involved provide many different functions for the customer by understanding a plethora of data and analytics about how the facility is actually used. The uses range from controlling the HVAC system to determining a desirable temperature for the room.

“The very first thing that we ever did was an HVAC product, which was essentially taking in all that data, which came from customers saying geez none of our HVAC system is driven by use,” said Costello.

Another important function that the sensors provide is collecting data on conference room management.

“A huge problem with conference rooms is that people don’t know when they're open, and people book them and never use them," Costello said. "A huge amount of conference room (lighting) goes wasted.”

“No down payment, no risk and potentially millions in savings” may sound reminiscent of a shady 2006 subprime mortgage lender. However, this is exactly what Enlighted offers its customers.

In November 2014, Enlighted introduced a new way for customers to finance their product through their Global Energy Optimization (GEO) program.

Enlighted’s customers are not required to make a down payment and the company will cover their entire cost of installation. The customer essentially agrees to be a participant in an energy hedging contract with Enlighted.

By changing from fluorescent lights to LED lights, Enlighted automatically saves the customer a significant amount of money. In an example provided during the GreenBiz Group webcast, a consumer that would normally pay $1 million annually in energy costs would see an automatic annual reduction of $200,000.

The customer then pays Enlighted a portion, say two-thirds, of its monthly energy savings as compared to what it would pay to a local utility company. Customers are then able to cash in on the other portion, the one-third left, of their savings, which, according to Costello adds up to a significant value over time.

“The beauty is that there is no capital, there is no financing, there is no lease, no balance sheet," Costello said. "We’ve turned it upside down. We have taken the entire responsibility for the entire project. 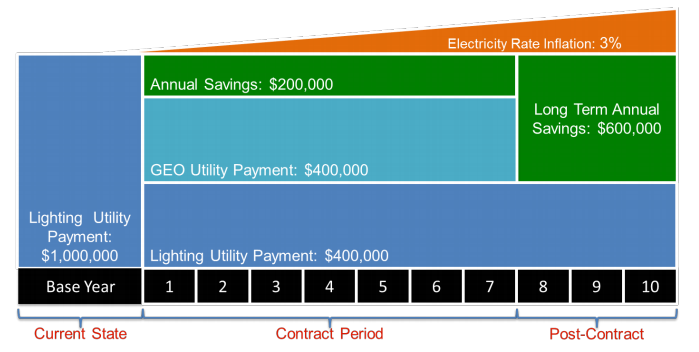 One obvious question is what happens if a customer defaults and cannot pay its utility bills? Since Enlighted is taking all the risk in funding the project, by laws of economics it would take the full brunt of the default.

“If the bank sees any risk like that, it won’t give us the loan," Costello said. "The customers that we are doing this for— we are essentially relying on their credit risk. For a Fortune 500 company, there’s essentially no credit risk."

Besides, the lights are usually the last things left on if things do go south.

Savings as a service: Could it be the future of facilities investment?

Savings as a service: Could it be the future of facilities investment?