In 15 years, 40 percent of the world (PDF) will lack access to clean water, assuming current consumption patterns hold, compared to just over 10 percent today. Fast forward 20 more years to 2050, and global food production to feed the 3.5 billion more people expected on earth will be lagging by 70 percent.

So why, despite these increasingly tangible examples of how environmental volatility stands to affect the global population — and the global economy — aren’t we seeing more meaningful progress on sustainability issues?

One answer: the nexus between making money and degrading the environment.

“If companies were to have to pay for the costs they created, it would actually wipe out profit,” explained Richard Mattison, CEO of sustainability research firm Trucost, during a webcast Tuesday coinciding with the release of the 2015 State of Green Business report co-authored by GreenBiz Group and Trucost.

Mattison added that “a one-to-one relationship” exists between corporate revenue and the environmental damage that results from business operations, making it painfully obvious that radical sustainability initiatives could undercut financial self-interest:

That fact is driven home by the financial magnitude of the issue; greenhouse gases, unsustainable water consumption, air pollution and negative land impacts account for the bulk of the $3 trillion in environmental impacts generated by the world’s 1,500 biggest companies. That pencils out to about 4 percent of global GDP — and for the 500 biggest companies in the U.S. alone, the count is $1 trillion in impacts, or about 6.2 percent of national GDP.

“We are hitting planetary limits,” Mattison said. “We can no longer continue to grow using a business as usual mindset.”

For all the financial disincentives associated with sustainability, Mattison added that there is reason to believe that the math (finally) may be changing for businesses.

The common denominator between water wars, climate change, social unrest and other direct and indirect consequences of environmental damage is economic risk — a new business imperative for top executives and board directors to consider. In other words, that means recognizing that a drought isn’t just an environmental issue, but rather a fundamental business risk involving processes such as raw materials procurement or sales efforts in impacted markets.

While sustainability is stereotypically associated with feel-good marketing or philanthropic endeavors, viewing natural capital through the lens of risk management changes the potential value proposition for skeptical business leaders.

The next step, then, is considering how companies might look to get a handle on risk. Building for resilience in uncertain terrain is emerging as a potential path forward — and one that entails connecting the dots between seemingly disparate environmental, social and political systems.

Transitioning to renewable energy, capitalizing on new financial mechanisms such as green bonds and overhauling metrics used to measure the impact of businesses on society are all potential opportunities for savvy companies to get ahead of institutional investors, regulators and shareholders demanding more accountability.

“One of the dirty secrets of corporate sustainability commitments is that that most of them are done in a vacuum, which is to say they’re done without necessarily understanding a company’s fair share of social and environmental impacts,” said GreenBiz Group Chairman and Executive Editor Joel Makower during the webcast.

Increased focus on science-based goals is one way to better align environmental realities and corporate strategy. Mining for insights based on unconventional data — such as understanding the relationship between each metric ton of carbon dioxide emitted in company operations and each million dollars in revenue — is another approach for forward-thinking businesses.

In the fossil fuel industry, for example, the term increasingly used to signify the long-term risk associated with oil and gas that may become much more expensive to exploit is “stranded assets.” By definition, those assets — which shareholders and regulators are increasingly pushing large companies such as ExxonMobil to disclose — must be written off as a loss on the company balance sheet if they become financially unfeasible to extract and sell.

But risk related to raw materials is by no means limited to Big Oil.

“By and large, the impact for many, many sectors lies in the supply chain,” Mattison said.

There’s a growing understanding of which companies face which kinds of risks. Just a few years ago, reporting on sustainability practices in corporate supply chains was seen as a discretionary activity undertaken to please a few picky investors or consumers. But now, tracing and managing corporate supply chains is increasingly critical to addressing risk.

“Increasing the transparency of supply chains is no longer an option for companies,” Makower told the webcast audience. “It is becoming a requirement by customers, especially B-to-B customers."

He added that "there simply is no longer an excuse for not knowing” how a supplier sources raw materials or how it manufactures component parts or products being procured.

One reason excuses are dwindling is that it’s easier than ever to track supply-chain practices thanks to new technologies and an emerging industry of consultants and insurers offering due diligence of company supply chains.

Sensors, data analytics and other Internet of Things applications allow companies to trace not only raw materials, but also how much carbon is emitted or how much water is consumed in the production of goods purchased from suppliers, among other things. Additionally, several big accounting and auditing firms have created practices around tracking and tracing supply-chain sustainability practices.

But a more fundamental driver of supply-chain transparency is reducing risk.

Jolts to supply availability or pricing can result, say, from water shortages experienced by manufacturers or agricultural producers in drought-stricken areas or damage from severe weather. Costs also suddenly could get higher when suppliers dependent on electricity from coal-burning generators are hit with a government decision to tax carbon emissions.

Such possibilities are helping to bolster the use of “shadow pricing,” or incorporating the price of natural capital such as water use or carbon emissions, into corporate financial accounting or product pricing as a way to get to the true cost of operations.

The need for better management of environmental supply chain hazards is also playing out in China right now, Mattison said. China has experienced a 10 percent decline in its GDP largely attributable to its fog-thick air pollution, he pointed out.

“The Chinese government is aware of this and going to address it very, very quickly,” Mattison said. “If I was relying on products made in China, then I would really be seeking to incorporate shadow pricing that reflects air pollution into the calculation of price inflation going forward and seeking to minimize that by working with the right sets of suppliers.” 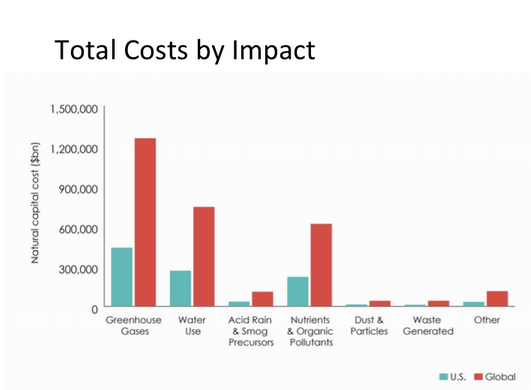 While these strategies can be helpful on a case-by-case basis, the real key is coordinating efforts to maximize impact.

Collective supply-chain management can have a hugely beneficial effect when whole industries demand sustainable business practices by commodity producers. A prime example is palm oil production over the last year, where a significant number of food manufacturers committed to zero net deforestation in sourcing their palm oil.

“We saw an incredible movement which has resulted in close to 80 percent of palm oil producers now committing to zero-net deforestation in one year,” Mattison said.  That, in turn, slows down the destruction of forests in places such as Brazil and Southeast Asia and leaves more spaces able to absorb carbon.

General Mills also catalyzed large-scale change when it decided to examine the sustainability practices behind all the commodities that flow into its products. Mattison said the consequence of that decision is having a massive ripple effect considering all the companies and sub-industries that supply product to General Mills.

“Two-thirds or our total product carbon footprint resides upstream with our suppliers. … That’s why our focus in the next couple of years is around supplier sustainability and sustainable sourcing,” the company stated in the State of Green Business report.

While supply-chain risks and shifting sustainability value propositions create plenty of work to keep corporate sustainability executives busy, the profession itself is still coming into its own.

"The profession is at a tipping point," said John Davies, vice president and senior analyst at GreenBiz Group, during the State of Green Business webcast.

In a GreenBiz survey of 945 companies — 45 percent from companies with annual revenue exceeding $1 billion — a full 87 percent of respondents said their employers either have increased sustainability personnel headcounts or kept staffing levels the same over the past two years.

How robust those departments are remains more of a question mark, especially when measured by dollar amounts. About 75 percent of respondents from large companies report sustainability department annual budgets of less than $1 million, including 36 percent who reported no dedicated budget at all, Davies said.

It is well worth noting, however, that companies sometimes allocate budgets for one-off sustainability projects, such as package redesigns, to other departments — one indication of a broader shift toward integrating sustainability into different departments within a company, as opposed to housing it in a standalone department.

"There are challenges if this profession is going to blossom," he said. "A rapidly recovering economy bodes well for investment in sustainability strategies. However, I don't think progress is going to come from checking more boxes."

Read the State of Green Business 2015 report (PDF) in its entirety.

Hear more about how risk is changing sustainability, on overhauling supply chains and other sustainable business challenges at GreenBizForum 15.

5 ways to apply natural capital valuation in your business

The case for natural capital accounting

GreenBiz Forum day 1: Going beyond the low-hanging fruit in sustainability