When the Green Electronics Council announced in August 2009 that it was taking the EPEAT green IT certification global, the GEC said it was trying to meet widespread demand for products bearing the EPEAT label.

Based on the results of its 2009 Environmental Benefits Report, published today, it seems that demand is perhaps stronger than even the GEC anticipated.

When the registry expanded internationally in August 2009, it included 40 countries from Europe, Asia and the Americas. By December of that year, there were nearly 10,000 registrations of products, and a total of 3,700 Gold-level products, outside the United States.

The changing of the registry from national to international brings some wrinkles to tracking statistics, though: Those 3,700 Gold-level products (EPEAT ranks products on Gold, Silver and Bronze levels, based on the number of the total 51 criteria each product meets) include many duplicate products that are registered in multiple countries. Nonetheless, the GEC counts more than 2,000 unique products registered around the globe by nearly 50 manufacturers.

And the growth of EPEAT continues apace within the United States: Sales domestically of EPEAT-certified desktops, laptops, and displaysgrew nearly 10 percent in 2009, to more than 48 million sales. All told, EPEAT has captured about 42 percent of total U.S. desktop and laptop sales and nearly 17 percent globally.

When the GEC calculates the environmental impacts of EPEAT-certified products, it factors in the entire lifecycle of those products' use, based on its Electronics Environmental Benefits Calculator, developed at the University of Tennessee Center for Clean Products. The Calculator measures the quantifiable benefits of EPEAT versus non-EPEAT products on greenhouse gas emissions, avoided waste, energy savings, avoided uses of toxics like mercury, and other benefits.

Even though these savings are an estimate based on assumptions about use and life-span, the figures the GEC published today are impressive: The EPEAT purchases in 2009 alone will save more than 10 billion kilowatt-hours of electricity, an amount GEC estimates could power 900,000 U.S. homes for a year. These EPEAT sales would also cut the nation's greenhouse gas emissions by 2 million metric tons and avoid 93,000 metric tons of water pollution emissions.

The tables below, from the report, lay out the savings in the United States and around the world. (Click image for a larger version.) 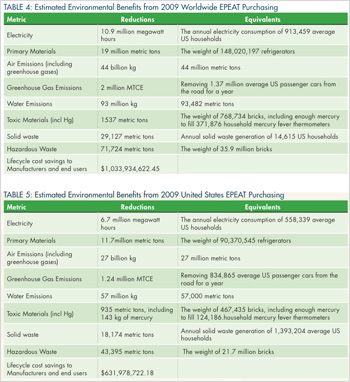 "As a nonprofit organization, EPEAT's mission is to advance environmental improvement," Jeff Omelchuck, EPEAT's Executive Director, said in a statement. "These benefits reaffirm that the EPEAT system works exceedingly well to channel purchaser demand toward products with reduced impact on the planet, rewarding manufacturers for the vitally important work of creating and supporting those products."

Global Growth and a Race to the Top

As a result of the global nature of both electronics supply chains and similar if not identical products sold in multiple countries, adoption of the country-specific registration model -- a move enacted to ensure quality control for products bearing the EPEAT label -- moved quickly as well. Between August 15 and December 31, 2009, most of the 40 countries included saw rapid growth in products, from 100 percent increase to almost 400 percent growth.

The countries with the largest number of EPEAT-certified products are Canada, with 719 products registered as of April 29, France with 433, Italy with 416 and Spain and the Netherlands with 408 each.

Perhaps unsurprisingly, China is leading the world in EPEAT sales, with nearly 8.5 million of the 32 million units sold outside the United States. Canada, France, Germany and the United Kingdom also sold more than 2.5 million EPEAT products each.

The average levels of certification are shifting to a greener shade, as well. In years past, the GEC has observed a "race to the top," with manufacturers building to meet the Silver and Gold levels of certification. In this year's report, Broze-certified products are almost nonexistent in each category, while Gold-certified desktops take the majority of the market. The charts below lay out the rankings (Click image for a larger version.) 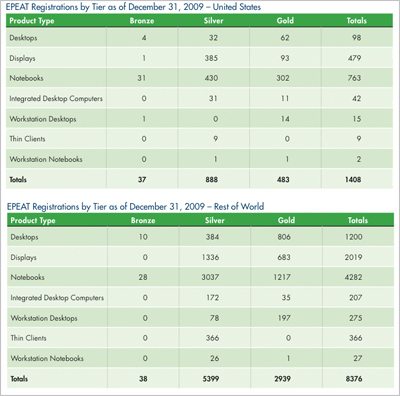 More details are available at EPEAT.net.