Equitable Origin: Can this 20-something clean up drilling and fracking?

An upstart standard aims to make the oil and gas industry more accountable on social and environmental issues. Can it work?

David Poritz has made it his life’s work — all 26 years of it — to make the oil and gas industry more accountable on social and environmental issues. Six years ago, while a student at Brown University, he launched a company, Equitable Origin, aimed at creating the first stakeholder-based certification system to verify environmental and social responsibility in the oil and gas sector. It was a quest he had already been on for nearly a decade.

You may want to read that last sentence again.

A brief history: As a sixth-grader in Amherst, Mass., Poritz learned of widespread oil contamination in the Ecuadorian Amazon and started Esperanza International, a humanitarian project that sent shoes, education materials and medical supplies to affected communities in the region. He spent his high school holidays traveling to Ecuador to lead his classmates on “toxic tours.”

Through a quirk of fate he met Cristobal Bonifaz, a lawyer who in 1993 filed a class-action lawsuit against Texaco on behalf of 30,000 Ecuadorians, charging the oil company with causing serious problems, including water pollution, soil contamination, deforestation and cultural upheaval resulting from its oil exploration in that country. That case was dismissed in 2006, but the following year Bonifaz filed another suit — against Chevron, which had since acquired Texaco — on behalf of new clients who claimed that pollution had given them cancer. The bitterly fought claims against Chevron remain tied up in U.S. and foreign courts.

Still a high-schooler, Poritz got to travel with Bonifaz to Ecuador. The fate of communities impacted by oil companies became a defining issue for Poritz, the focus of his thinking and interests throughout middle school and high school. He worked for Bonifaz during summer vacations, helping him with the lawsuit.

It was out of those experiences that Poritz became familiar with the issues associated with oil and gas development, and saw the need to develop better standards to address the full range of environmental and social issues. In 2009, working from his dorm room while a sophomore at Brown, he launched Equitable Origin to develop such a standard.

(A 2014 PBS documentary, Oil & Water, follows Poritz and Ecuadorian Hugo Lucitante, another young crusader, for eight years on their quest to reform the oil industry. It premiered at the Seattle International Film Festival and has received numerous awards and honors.) 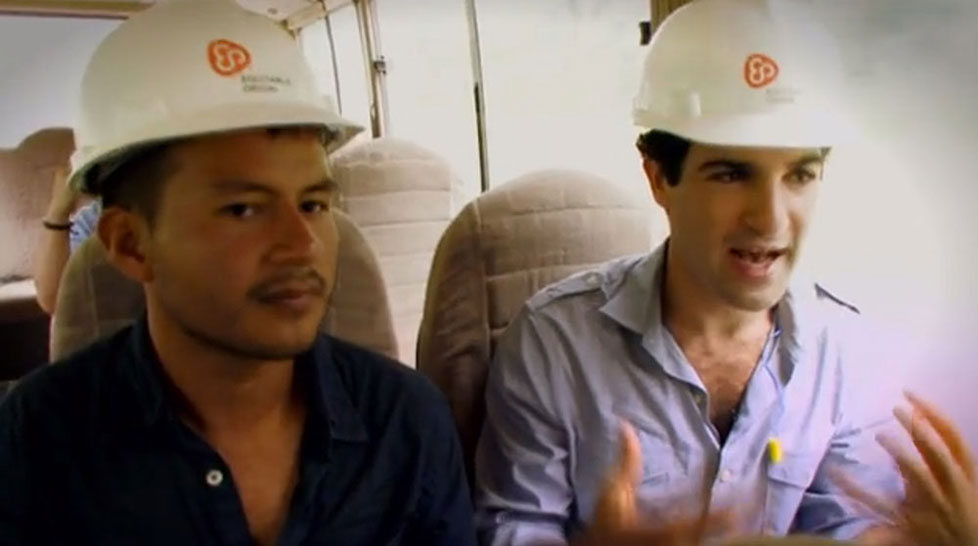 David Poritz (right) and Hugo Lucitante, in a scene from the PBS documentary "Oil & Water."

In the run-up to his appearance at the 2015 GreenBiz Forum, I recently talked with Poritz — a 2007 Henry David Thoreau Scholar, a 2010 Harry S. Truman Scholar and a 2012 Rhodes Scholar — about the EO standard and where his firm plans to go from here. The following has been edited for clarity and length.

Joel Makower: David, let’s start with a status report on EO100. Where are you in the process right now?

David Poritz: We reached a major milestone in August with Pacific Rubiales gaining the first two site certifications, which represented for us the first successful implementation of the standards. We are now undergoing an additional consultation period in order to incorporate the feedback and the learnings from those experiences. Although they were international in terms of how they were designed, we thought it would be valuable as we expand beyond Latin America to get input from groups that were farther outside the region.

Makower: Is the standard pretty transportable from country to country?

Poritz: Standards across different countries vary pretty dramatically. If you go to Colombia versus Uganda, for example, you’re going to have fairly different national law, but the standards were developed to be able to successfully be implemented across a diverse set of regions. The way they were designed is such that if there is weakness in local regulation, the standard basically fills that gap. What that means is in a country that has very high regulation, the companies have to improve in certain areas slightly less. Where when there’s greater gaps, it’s more work for them to gain certification.

Makower: Having the standard is one thing. Seeing it produce the desired outcome is another. How will you know if it’s working?

Makower: What kind of pushback have you gotten as you’ve developed it?

Poritz: Initially, we got pushback from some of the more radical NGOs, who felt that developing a set of standards for oil and gas would in fact make it easier for oil and gas projects to be conceived of in certain areas where they felt development should not happen at all. That’s a common critique. There was technical pushback from different groups who felt either that certain areas of the standard were too difficult for companies to reach, or the inverse of that, where NGOs felt that there was areas that needed to be improved.

The beauty of a standard-setting process is that it’s evolving. We’ve undergone and created a process that enables us to fill those gaps. One concrete example is land rights and property rights. The standard initially wasn’t as strong as it should have been in regards to land and property rights of indigenous and local communities. We worked on our technical committee, we brought in more experts and we’ve dramatically improved the rigor in that area, and I think that is something that we’ll continue to see as we implement it.

Makower: How about from the oil and gas industry? What’s the pushback you’ve gotten from them?

Poritz: I would say the pushback has been a lack of engagement. Where we’ve found the greatest interest has been with the small to medium-sized companies — the firms that are trying to differentiate themselves and define themselves as leaders. I think the challenge for us is going to be leaping the chasm to the supermajors because it’s going to be pretty important to get their buy-in.

Interestingly, national oil companies have been very receptive to what we’re doing. We’re starting to work with Ecopetrol in Colombia. We’ve had a lot of conversations with Pemex in Mexico. The real challenge is going to be getting the big companies — the Shells and Exxons of the world. I think they’re standing by and watching how this is going to play out.

Makower: What do you think they want to see before they jump in?

Poritz: I think they want to see the value that it creates for the operator. Although a lot of these major companies have incredible innovation technically, they want to see if this is this just another standard, or is it going to actually create tangible commercial value. That’s a question that you saw in the forestry sector with the Forest Stewardship Council. I think you see it in almost every certification: The big companies stand by and watch before they jump in.

Makower: One of the ways FSC got traction was that they had environmental groups applying pressure on the demand side. How will you create demand for the standard?

Poritz: We have two distinct and important sides of our business. One of them is the upstream certification, which is working with the oil and gas production companies to implement the standards, and that’s where the majority of our time and energy and focus has been up to this point.

The second side of our business, which gets to the more FSC-like side of things, is how are we creating demand. We’re just beginning to do that through EO certificates, which is very analogous to a Green Palm certificate with RSPO. My hope is that that the certificate marketplace will become an important pathway for creating demand for certification.

Makower: So where do you go next? I assume that EO100 is the first of several standards.

Poritz: For the time being, we’re focused on oil. The second thing we want to begin to address is natural gas. Gas production is an incredibly challenging issue, so that’s probably the second challenge that we’ll go after once we believe that we’ve successfully managed to create a system for oil.

Makower: How much did you ever expect that you’d be taking on the oil and gas industry?

Poritz: I don’t know. When I was a teenager, I was involved much more in advocacy. In terms of challenging the oil and gas industry, it was about suing them. I realized that in certain situations, tort litigation and those mechanisms were really important in creating greater accountability. But I also realized that in order to create scalable change in the sector, which is so large and so integral to all of our lives, we needed to create another tool, and that’s how I arrived at voluntary certification.

Makower: And the rest, maybe, is history.