Is Europe superior on sustainable business?

Is Europe superior on sustainable business?

With the future of the European Union at the top of the headlines these days, I’ve been thinking about the differences between European and American companies on sustainability.

My own experiences make me think Europe is way ahead of the United States when it comes to sustainable business. Working for McDonald’s, I quite often dipped into Europe from my Chicago base. I heard even crusty cab drivers pontificate about climate change and bemoaned, even publicly, that the sustainability IQ of Americans was 1 on a scale of 1 to 10, compared with Europeans at 10.

Momentum has shifted. American companies have come on strong in the past few years. Where could I go to find a sustainability leader steeped in both cultures to get a reality check?

Who better than Jeff Hogue, whom I hired at McDonald’s as my right hand? He spent 17 years leading sustainability at Danisco, a Danish biotech company. When I asked him why he wanted to join McDonald’s, I remember he told me he wanted to work for a big American brand that had challenging consumer issues and was serious about creating systemic change.

He got that and more, and revelled in it. Jeff’s three years with me were my best years because Jeff is so enormously talented, motivated and energetic, freeing me to be strategic versus tactical. We kidded in the office that he was the Energizer Bunny, because he was on the move like no other. 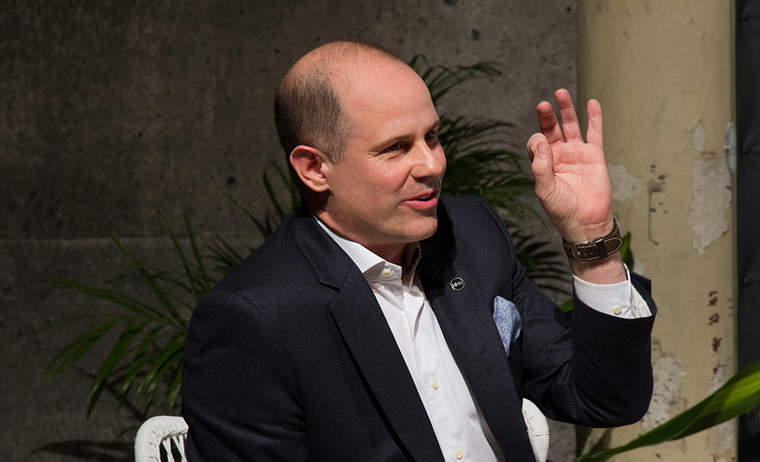 Jeff has returned to Europe, accepting the first global sustainability officer role at the European-based apparel retailer C&A in December 2014. You may not know C&A because it does business only in Europe, China, Brazil and Mexico. Over the past 18 months, Jeff led the company’s first strategic roadmap for sustainability, with goals, accountability and measures, all in C&A’s first sustainability report, published last month.

I realize that Jeff is quite motivated, but I figured a lot of this achievement was due to the European bias toward sustainability. After catching up with my good colleague on the phone recently, I realize my preconceived notions are wrong.

From Brussels to Brooklyn

While Jeff said there is indeed a strong desire to support social welfare in Europe and beyond, he said, "Protecting social welfare and impacts in our value chain is only part of the picture."

He elaborated: "In both the U.S. and Europe it is essential to have a strong business case leading to opportunities and clearly articulate the risks of not doing anything quantitatively and qualitatively."

Business is still business, from Brussels to Brooklyn.

The main revelation I grasped from Jeff was the "convergence" of European and American sustainability efforts.

There has been a historical emphasis on citizenship and charity in the U.S., while in Europe there has been more of a systems focus on key issues like climate change.

Jeff noted that from his experience, "There has been a historical emphasis on citizenship and charity in the U.S., while in Europe there has been more of a systems focus on key issues like climate change. Indeed, Europeans have been taking climate change seriously for over a decade, developing business-level plans broadly before many American companies.

"However, American companies are stepping up, being bold, including many companies developing very robust climate change positions and strategies. Net-net, when it comes to sustainability, there is more the same than different between Europe and the U.S."

Even legislation and regulation are becoming similar in terms of scope, depth and enforcement, according to Jeff. He did give a nod to Europe being less litigious, with less fear of litigation. (The U.S. has one lawyer for every 300 people; Germany for every 593; France for every 1,403.)

I asked Jeff what was the most powerful force for change at C&A. He spoke a universal truth. "Values trump everything," he said. "Plus, it helps to work for a strong, family-run company that is truly looking long term, measuring sustainability in generations."

Think of this: C&A is 175 years old, established in 1841. Only a handful of such companies are in the U.S. (Dupont, Colgate, Hartford and Proctor & Gamble are a few). "Thinking about the longevity of the company allowed us to make progress quickly," said Jeff.

"Our people view sustainability through our values. Using the strong momentum of our core company values, it is has been very effective to connect our strategy to them, allowing them to pull the strategy forward."

What did Jeff carry with him from McDonald’s?

Using the strong momentum of our core company values, it is has been very effective to connect our strategy to them, allowing them to pull the strategy forward.

He told me a lot of the process was directly transferable to C&A, including the internal vetting.

When he worked for me, Jeff and I would commiserate sometimes about the winding road it takes to get buy-in internally. Referring to never-ending internal alignment, Jeff said, "I know it can be painful, but it created essential internal ownership that was far more effective in the long-run than sitting in a room and dictating the plan."

Cotton is the new beef

While at McDonald’s, Jeff was part of the big bold move to source sustainable beef. Beef is McDonald's. Beef has large sustainability impacts. To him, cotton is his company’s "beef."

"I realized very early that our natural leadership position is cotton," Jeff said. "At C&A over 60 percent of our collections are cotton and we understand that in the production of cotton, the environmental and social impacts dominate as material issues."

To drive systemic change as McDonald’s has on beef, Jeff and C&A have focused their efforts in partnership with the C&A Foundation to drive change in the cotton industry by being part of the convening of the Organic Cotton Accelerator (OCA), a multi-stakeholder initiative focused on building a prosperous organic cotton sector which benefits everyone, from farmer to consumer. Like the Global Roundtable for Sustainable Beef, OCA’s aim is to build a fair, robust organic cotton market with appropriate integrity at every relevant level, while growing supply and demand for organic cotton.

"We have a lot more to do on cotton, like McDonald’s has on beef," said Jeff. "Our goal for 2020 is to source 100 percent of our cotton from sustainable sources."

To accelerate this goal and to support its organic program, C&A joined the Better Cotton Initiative last year, and already has engaged its buyers to make the switch from conventional cotton to BCI. They have seen great success, sourcing close to 10,000 tons in just six months.

Jeff leads a large team, some 130 people. He credits the talents and dedication of his team as critical to C&A successful leap into sustainability. He has people of all nationalities. Just as sustainable business is country-blind, so are the talents of people blind from any stereotyping.

I think Jeff is right about Europe and the U.S. converging on sustainability. Twenty years ago, this was seemingly impossible. For our future, the possibilities now seem endless.

How McDonald's is Mainstreaming Sustainability

From Google to GE, big shakeups in sustainable business