Editor's note: Whether G20 countries embrace responsible climate policy is of critical importance, as together they account for roughly 80 percent of global greenhouse gas emissions and 80 percent of global GDP. German Chancellor Angela Merkel announced responsible climate policy as a goal of this year’s G20 Summit. In the lead-up to the Summit, WRI took a closer look at G20 countries’ progress toward meeting their targets under the Paris Agreement.

The European Union is a major player in reducing world emissions.

With a population of about 500 million, the 28 member states account for over 8 percent of total GHG emissions. Per capita, the EU emitted about 7.5 tons of carbon dioxide in 2013, compared to 19.6 in the United States and 8.4 in China. 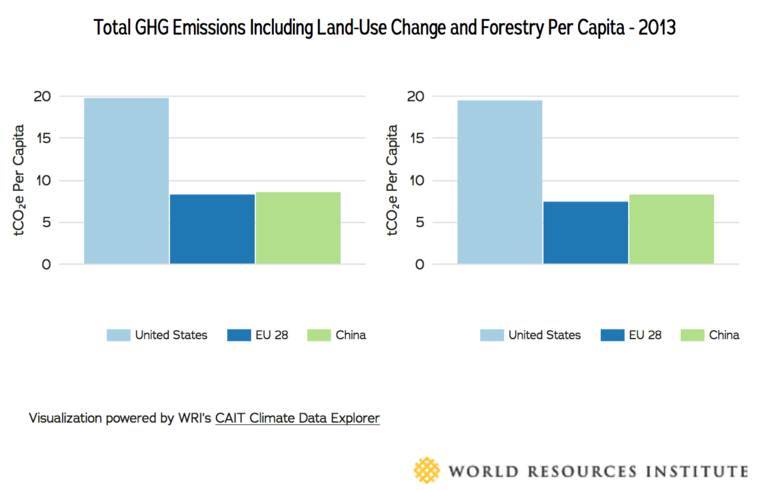 As latest estimates (PDF) from the European Commission show, the EU's share of global emissions has declined to 22 percent below the 1990 level. But further actions and polices need to be implemented for the bloc to reach its emission reduction goals.

What Europe has promised

Uniquely, the EU's member states issue a joint NDC, as environmental affairs are jointly managed as part of the EU's regional and economic integration. The EU's NDC (PDF) includes an economy-wide emission reduction target of 40 percent below 1990 levels by 2030.

The primary vehicle for achieving this is by decreasing the credits available in the EU Emissions Trading System (ETS), a cap-and-trade system covering more than 11,000 power stations and industrial plants. Member states also will increase the share of renewable energy and strengthen energy efficiency measures.

The 40 percent target has been made binding by the 2030 climate and energy framework, adopted by EU leaders in October 2014. But it applies to the EU as a whole, whereas at the country level member states' contributions are not binding.

Since the adoption of the Kyoto Protocol, the EU has crafted several measures to decrease GHG emissions, the latest being the 2013-2020 Effort Sharing Decision and a proposal for a 2021-2030 Effort Sharing Regulation (ESR).

These tools establish annual GHG emission limits per country for the non-ETS sectors, based on their relative wealth. The proposed regulation sets the target of a 30 percent reduction in 2030 compared to 2005.

However, the proposal has attracted criticism for so-called "loopholes" that allow member states to use ETS allowances to achieve targets in the non-ETS sectors. Less ambitious member states could take advantage of loopholes, causing the whole EU to fall short of its climate ambitions. 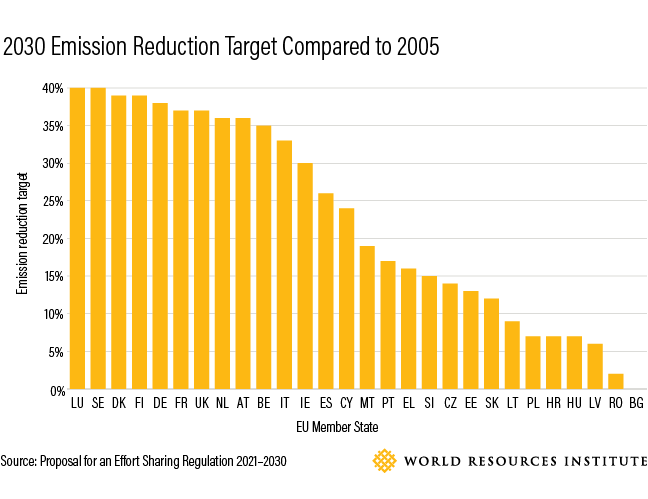 Another destabilizing influence is Brexit. The United Kingdom's withdrawal from the European Union means each of the 27 member states must decrease its emissions even further than when the number was 28 — certainly a potential source of tension.And as a richer country, the United Kingdom's goal was relatively aggressive. With its departure, countries with less ambitious climate action policies will gain power, and might be able to hold back climate policies — and possibly advocate for weaker ones.

Nevertheless, there are reasons for optimism both at EU and national levels.

The EU is currently revising directives that could help drive more renewable-based and efficient heating and cooling systems. One of these, the Renewable Energy Directive, proposes a specific target for the transport sector, requiring each member state to guarantee that 12 percent of energy used in all forms of transport is renewable by 2030. States and businesses seem receptive to such measures. Just in the past few days, France has announced that will ban the sale of petrol and diesel cars by 2040, while Swedish car manufacturer Volvo will only produce electric or hybrid vehicles starting in 2019.

Furthermore, the European Parliament just debated scaling up actions to reach the NDC pledge. Dutch MEP Bas Eickhout proposed several amendments to the ESR document, such as closing the aforementioned ETS loopholes. Although not all of Mr. Eickhout's amendments made it through the vote in the Parliament, an important amendment to include long-term goals for 2050 has been adopted.

At the national level, some member states have already increased their national ambitions above their share in the EU NDC. In June, Sweden passed a new climate law which embeds a zero GHG target by 2045, well before the long-term goal of the Paris Agreement. Sweden intends to achieve this ambitious goal by utilizing a carbon tax, which now stands at €137 per ton. First introduced in 1991, Sweden's carbon tax is an example of how setting a high price is within the ETS is economically viable, as Swedish GDP has grown by 60 percent since 1991, ahead of the 45 percent GDP increase in EU member states as a whole.

In France, newly-elected President Emmanuel Macron aims to uphold the commitments contained in the 2015 Energy Transition and Green Growth Law, while raising the ambition set by president Hollande in 2016 to close all coal power plants in 2023, to within 5 years. Moreover, France's current carbon tax of €34 per ton emitted will progressively increase each year to reach €110 per ton in 2030. These levies targeting non-ETS sectors are much more ambitious than the EU-wide ETS, which taxes a low €5.5 per ton and thereby fails to properly incentivize companies to emit less CO2.

The G20 summit this weekend presents an opportunity to showcase the economic and financial policies which can help advance climate action and reinforce support for the Paris Agreement.

Going forward, the European Union should push for binding targets which will help further mobilize member states to action and hold them accountable for reducing their emissions. Although the EU has not yet shown a willingness to increase its climate ambitions, there are a multitude of opportunities in the months ahead to explore that possibility.

Your guide to Europe's 'Green New Deal,' the continent's new plan to get to net zero

Europe's Lead on Climate Change: Too Much or Too Little?