The Gruppo Mezzacorona winery in the foothills of the Italian Dolomites and a Coca-Cola bottling plant in Northern Ireland have cut the ribbon on new green facilities.

Gruppo Mezzacorona in the Trentino region of nothern Italy now runs three bottling lines that operate with solar power, and the Coca-Cola Hellenic Bottling Company has consolidated production for all of Ireland in its new state-of-the-art £93.5-million plant (about $146 million) in Lisburn, Country Antrim, in Northern Ireland.

Gruppo Mezzacorona's solar installations, which total 500 kwh, become fully operational at the end of this month, according to information released today by Prestige Wine Imports in New York, which markets Gruppo Mezzacorona brands.

The winery, which also purchases hydroelectricity, expects that solar power will supply 30 percent of its energy needs by June 2011.

The recent installations are the latest effort by Gruppo Mezzacorona to ease its environmental impacts. The groups also has solar arrays at its holdings in Sambuca di Sicilia and Acate, Sicily.

About 1,800 people celebrated the latest installations, which represent an investment of more than 20 million Euros (about $26 million), with group President Guido Conci at a ceremony last month.

The plant's seven filling lines -- four for PET bottles, one for glass, one for cans and one for post-mix -- and can produce 1.5 million liters of Coca-Cola products a day.

A PET molding unit with six blow molders that can yield 750,000 bottles per day also is located at the site, which features an energy efficient combined heat and power system and a new high-tech, fully automated warehousing system. 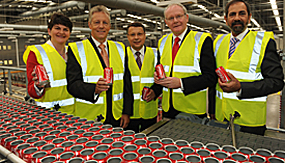 The CHP system, constructed in collaboration with ContourGlobal, is one of four used by Coca-Cola Hellenic in its 28 countries of operation. Another 11 systems are being developed by ContourGlobal for the bottling firm.

The CHP plant at the Knockmore Hill facility  "will cut CO2 emissions at the plant by up to 66 percent while supplying excess clean electricity to the local power grid," Constantinou (pictured far right) said in a statement. "Our aim is to cut CO2 emissions by an average of 20 percent across all 80 of our bottling plants."

A visitors center at the new facility will open November.