The data tracking worldwide adoption of electricity generated by solar, wind and other renewable resources looks better than ever. About 11.3 percent of all power consumed in 2016 came from these resources and adoption will only continue to accelerate — in many cases faster than anticipated.

But we’re also reaching an awkward phase in the transition to a low-carbon economy. The dilemma: utility companies, local officials and national governments are grappling with how to ensure affordable clean power for everyone and that adequate resources are devoted to other big concerns where progress has been far slower. These slow-moving issues include grid reliability and stability, as well as decarbonizing existing energy resources and heavy industries such as steel production, aviation and shipping. It will be tough to bridge the chasm.

Those themes were sounded often this week during the Future of Energy Summit, hosted by Bloomberg New Energy Finance in New York. "Most of my customers want a clean energy product; all of my customers want affordable energy," Ben Fowke, chairman, president and CEO of Xcel Energy, said during a panel discussion with utility executives.

He continued: "When you can combine environmental benefits with economic benefits, it’s pretty much a no-brainer. … We’re going to continue to do that, and we’re going to deeply decarbonize. We’ve already reduced carbon emissions 30 percent since 2005. It will be 45 percent by 2021, and 60 percent by 2030."

Some of those investments were prompted, perhaps, by the prospect for tougher federal regulations on carbon dioxide emissions — some covered by the ill-fated Clean Power Plan, which President Donald Trump moved to kill via one of his many executive orders. The practical reality is that the economic motive for doing this is simply growing stronger.

"We can save our customers billion in fuel costs," Fowke said.

It was refreshing to hear Secretary of Energy Rick Perry also speak positively about the ongoing potential for more clean power in the United States.

Given Trump’s crusade to save the coal industry and his less-than-supportive rhetoric about the solar and wind industries, it was refreshing to hear Secretary of Energy Rick Perry also speak positively about the ongoing potential for more clean power in the United States.

"We are going to ensure that renewable energy finds its way to the grid," he said during remarks at the conference. After all, this is the guy who helped Texas become the biggest state when it comes to wind generation resources — it actually produces more generation capacity than France, Canada or the United Kingdom.

However, Perry made no bones out of declaring that the Department of Energy’s top concerns under Trump are exploiting America’s "abundant resources" and making sure the country’s electricity baseload is reliable, in the interest of national security.

Indeed, Perry hinted that governors who advocate policies the Trump administration sees as hostile to its "all of the above" energy strategy could be in for a fight. "States will be preempted in some cases," he said.

Although Perry wasn’t specific, the California Air Resources Board in late March voted to uphold emissions standards for cars and trucks that are stricter than the national standard — the president has vowed to ease them. New York is also potentially in for a fight, given the strict carbon emissions that it has established — 34 red and blue states have adopted some sort of climate action plan.

Perry also confirmed how he stands on whether the United States should abandon the Paris Climate Agreement, the set of actions we must take to keep the world’s temperatures from increasing more than 2 degrees Celsius: He thinks we should keep it, just not in its current form.

"I’m not going to tell the president of the United States to walk away from the Paris accord," he said. "I will say that we need to renegotiate it."

We need to prioritize more than clean electricity

Perry’s beef? Although countries such as Germany and France speak loudly about their support of the agreement, their own emissions levels have been rising. Meanwhile, some data suggests that the United States is on track for a 17 percent reduction by 2020 — the Paris pact calls for reductions of 28 percent by 2025.

Those numbers underscore the reality that while the adoption of renewable energy is progressing rapidly — faster than many had anticipated — "clean electrification" alone won’t deliver the carbon emissions reductions necessary to meet the terms of the Paris Agreement.

That’s the rallying cry of a report released Tuesday at the conference by the Energy Transitions Commission, a diverse group of companies, NGOs, academics and equipment suppliers. Former Vice President Al Gore is involved, along with representatives from investment giants BlackRock, Bank of America and HSBC; energy powerhouses Royal Dutch Shell and BHP Billiton; and non-profits We Mean Business and World Resources Institute.

"The world has a special opportunity to boost economic and social progress while limiting global warming," said Nicholas Stern, professor of the London School of Economics, in a statement. "Shifting from high-carbon to low-carbon energy systems is within our grasp and can embody both strong growth and better quality of life. But the window of opportunity is closing; we have less than 15 years to act." 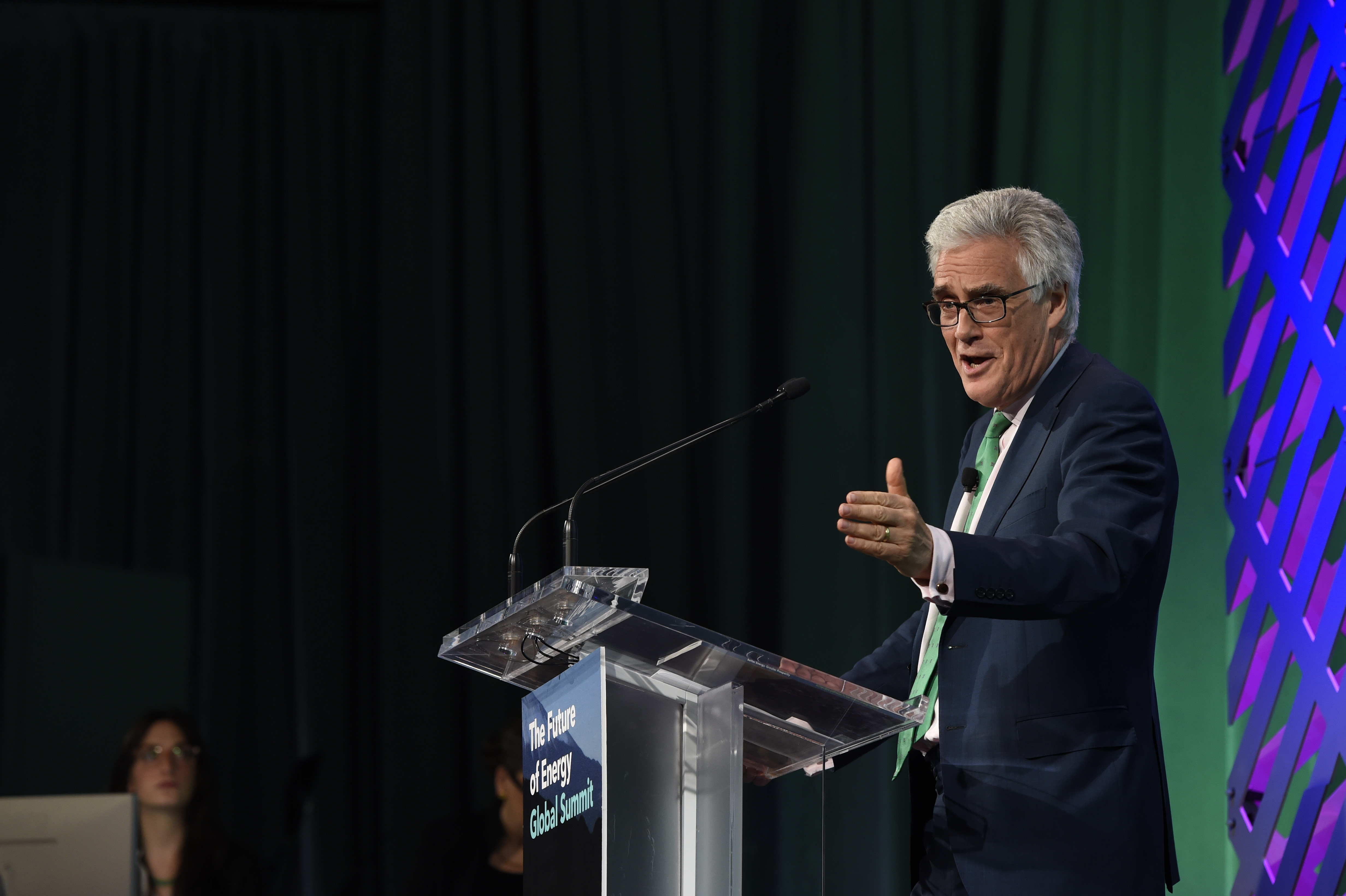 The report suggests that businesses, governments and investors should step up their support of innovation in other areas such as bioenergy, hydrogen and carbon capture and sequestration. In addition, more intense focus is needed on energy productivity, the process of reducing the amount of energy needed to drive a certain industrial process while simultaneously increasing production.

Collectively speaking, the ETC analysis suggests that the world must follow four connected paths to cut global annual carbon emissions to 20 gigatonnes (Gt) by 2040 from 36 Gt by 2040. (If we do nothing, or business as usual, the world probably will be producing 47 Gt by that timeframe.)

The challenge, of course, is that "strong" public policies will be essential to achieve this, according to the ETC. Among what’s needed: "meaningful" carbon pricing, phase-out of fossil fuels subsidies and research investments for low-carbon technologies.

"We are ambitious but realistic," said Adair Turner, chairman of the ETC, in remarks prepare for the Bloomberg summit. "Despite the scale of the challenges facing us, we firmly believe the required transition is technically and economically achievable if immediate action is taken."